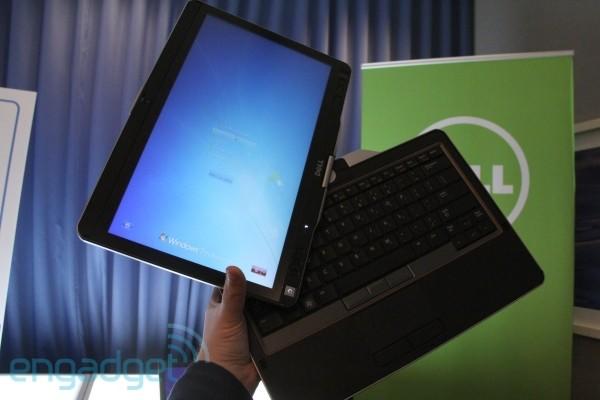 Dell unveiled a mighty business laptop lineup this morning, but only a few stood out -- like this Dell Latitude XT3 convertible tablet PC with a quad dual-core Intel Sandy Bridge processor inside. Yes, it seems Dell's decided to forgo the incredible battery life of its predecessor for potent performance instead, with this particular unit packing a 2.5GHz Core i5-2520M CPU and 2GB of RAM underneath that swiveling 13-inch display. While the prototype XT3's screen seemed a little washed-out and viewing angles left something to be desired, we have to admire its matte dual-digitizer display, which takes multitouch input from at least three fingers simultaneously and also recognizes a pop-out stylus pen (the former responsive enough to navigate Windows 7 by touch alone, and the latter beyond our can't-draw-a-straight-stick-figure ability to easily test). That sunlight-readable screen isn't just for traveling artists, though, as Dell was quick to inform us that the XT3 is the company's attempt to make a convertible tablet that corporate IT will accept as one of its own, thanks to the same magnesium frame and universal docking port as the rest of the new Latitude lineup. We can't lie: we'd be pretty excited about the potential for awesome here, if we had any notion of release dates or price. Find some pictures below, and mosey past the break for a hands-on video.