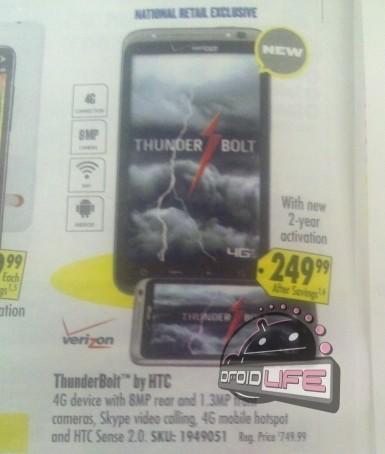 Though hard facts on the HTC Thunderbolt's availability were hard to come by, conflicting rumors were flying fast and strong -- now, a Best Buy ad seems to clear most everything up. Like we'd originally heard, the 4.3-inch LTE smartphone will launch for $250 on a two-year contract -- or a wallet-crushing $750 without -- but the key ingredients here are three words at the very top. The Thunderbolt is apparently a "national retail exclusive" for Best Buy, which explains how the device could simultaneously face Verizon delays and yet come in for a Valentine's Day landing at the big box store. You'll also note that the ad mentions Skype video and 4G mobile hotspot functionality, so we'd be surprised if the phone came without, though it's also possible that the whole kit and kaboodle has been delayed to match -- Droid-Life says this ad comes from a February 20th circular, so we might not see anything until then.

In case you needed an additional reason to be excited about the Thunderbolt, the developers at AndIRC have some related news -- they've already rooted a prototype version (which just so happens to have the familiar codename Mecha) and believe the same technique will work on retail devices. Wouldn't it be nice to have root on day one... whenever that is?

In this article: android, Best Buy, BestBuy, exclusive, hack, hacked, hacks, HTC, Mecha, retail, root, rooted, smartphone, Thunderbolt, timed exclusive, TimedExclusive, Verizon, VZW
All products recommended by Engadget are selected by our editorial team, independent of our parent company. Some of our stories include affiliate links. If you buy something through one of these links, we may earn an affiliate commission.
Share
Tweet
Share