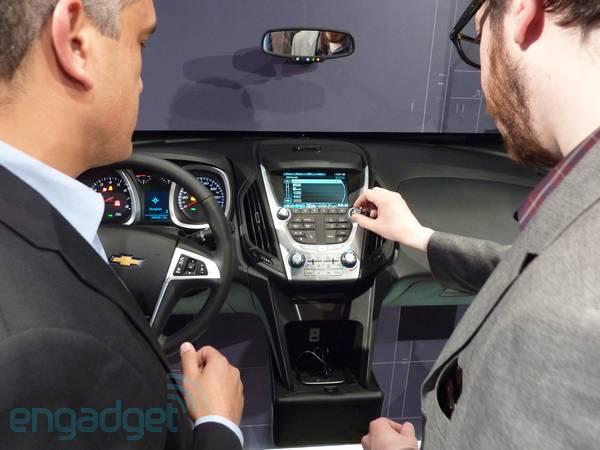 Welcome to the wonderful world of smartphones, Chevrolet. The company has just announced (on our very show, no less) a system it calls MyLink. It's a definite competitor to things like Ford's AppLink and the recently unveiled Toyota Entune system. Offering compatibility with iOS, BlackBerry, and Android it allows for a driver to interact with apps running on their smartphones using controls in their car. Connectivity is totally wireless for the last two, with data going over Bluetooth, but as of the current version iOS devices need to be physically tethered to the car. That's a bit of a bummer.

Currently there are only two compatible apps: Stitcher and Pandora, the latter maintaining its status of the world's most popular infotainment app. Naturally, more are coming. Drivers can interact with the apps using voice, courtesy of Nuance, or using the touchscreen displays found in the Volt and Equinox, the first cars that will offer this system and which will also offer PowerMat charging, meaning you can not only stream tunes wirelessly but also charge your device. No word yet on cost or what option packages this system will be available in, but we'll be bringing that to you as soon as we can. Until then, enjoy the video demo after the break. NEW YORK – Consumers who seek a higher level of in-vehicle wireless connectivity and customized infotainment options, plus the unmatched safety and security of OnStar need look no further than the 2012 Chevy Volt and Equinox.

When these vehicles go on sale later this year, they will be the first to offer Chevy MyLink – an in-car infotainment package that builds on the safety and security of OnStar and seamlessly integrates online services like Pandora® internet radio and Stitcher SmartRadio® using hands-free voice and touch-screen controls via Bluetooth device connectivity.

"There is a new generation of car buyers who don't want to settle for mass market radio," said Rick Scheidt, vice president of Chevrolet Marketing. "They want to create their own individual stations and have access to them wherever they are. Chevrolet vehicles have offered customers the ability to use portable media devices since 2006 and the introduction of MyLink takes media personalization to a new level. "

MyLink retains all the capabilities of today's entertainment units, including AM/FM/XM tuners, CD player with MP3 playback, auxiliary and USB inputs. But, Stracke says, "These are the essentials and we're building from there."

Among the new benefits provided by MyLink:

- Enhanced hands-free voice control system powered by Nuance®, which allows simple voice commands to initiate phone calls and select radio stations or media from portable MP3 players and smartphones. A tap of a button on the steering wheel enables intuitive verbal control of smartphone applications like "play (artist name)" or "call (name of contact)" to keep the driver's hands on the wheel and eyes on the road.

- Pandora® internet radio allows users to create personalized radio stations based on favorite artists or genres and Stitcher SmartRadio® enables access to thousands of audio programming choices allowing customers to build a personalized listening experience. MyLink integrates control of both of these apps for a driver directed listening experience.

- Gracenote®: identifies the music collection on the driver's smartphone or MP3 player and presents information such artist name, genres and album cover art on the MyLink screen and enables users to select similar music to the tunes they love. Gracenote also improves the accuracy of MyLink's voice activation system by allowing users to access music using artist nicknames, such as "The Boss," "G.N.R," or "The Fab Four" simply by using MyLink's touch-screen or steering wheel buttons and voice control interfaces.

- Upgraded USB connectivity: While Chevrolet has offered auxiliary device connectivity since 2006, MyLink adds flash memory capability to its USB device connections. This provides users with the ability to access approved applications that will make their MyLink system even more functional, while assuring that driver's maintain eyes on the road and hands on the wheel.

The debut of Chevy MyLink extends the OnStar experience from safety and security to information and entertainment by seamlessly integrating the capability of a smartphone into the vehicle so that hand-held phones may be safely stowed while driving. .

When OnStar debuted in 1996, it pioneered in-vehicle connectivity with the auto industry's first embedded telematics system. It has grown from primarily offering automatic crash notification and security features to include remote vehicle diagnostics, turn-by-turn navigation and the ability to slow down stolen vehicles.

In November 2010, OnStar released a smartphone application for all 2011 Chevy vehicles that incorporated remote start, lock/unlock, and vehicle status checks as well as battery management functions for Volt owners. Volt owners also have the MyVolt.com website to provide those remote management features and other Chevy owners soon will have access to similar web-based OnStar services.

The combination of MyLink and OnStar will soon be joined by the integration of the Powermat® charging system – eliminating the need for charging cords. Chevrolet MyLink will be available beginning with the 2012 Chevrolet Volt and Equinox this fall before expanding to other vehicles in the Chevy lineup over the next 18 months.

About Chevrolet
Founded in Detroit in 1911, Chevrolet celebrates its centennial as a global automotive brand with annual sales of about 4.25 million vehicles in more than 120 countries. Chevrolet provides consumers with fuel-efficient, safe and reliable vehicles that deliver high quality, expressive design, spirited performance and value. The Chevrolet portfolio includes iconic performance cars such as Corvette and Camaro; dependable, long-lasting pickups and SUVs such as Silverado and Suburban; and award-winning passenger cars and crossovers such as Spark, Cruze, Malibu, Equinox and Traverse. Chevrolet also offers "gas-friendly to gas-free" solutions including Cruze Eco and Volt. Cruze Eco offers 42 mpg highway while Volt offers 35 miles of electric, gasoline-free driving and an additional 344 miles of extended range. Most new Chevrolet models offer OnStar safety, security and convenience technologies including OnStar Hands-Free Calling, Automatic Crash Response and Stolen Vehicle Slowdown. More information regarding Chevrolet models can be found at www.chevrolet.com

About OnStar
OnStar, a wholly owned subsidiary of General Motors, is the leading global provider of connected safety and security solutions, value-added mobility services and advanced information technology. Currently available on more than 40 MY 2011 GM models, OnStar soon will be available for installation on most other vehicles already on the road through local electronics retailers, including Best Buy. OnStar safely connects its more than six million subscribers, in the U.S., Canada and China, in ways never thought possible. OnStar Stolen Vehicle Slowdown is a recipient of the 2010 Edison Award for Best New Product in the technology category. More information about OnStar can be found at www.onstar.com.

In this article: 2012, 2012 volt, 2012Volt, android, apple, blackberry, chevrolet, chevrolet mylink, ChevroletMylink, chevy, equinox, Feature, Featured, Features, general motors, GeneralMotors, gm, infotainment, ios, mylink, rim, smartphone integration, SmartphoneIntegration, video, volt
All products recommended by Engadget are selected by our editorial team, independent of our parent company. Some of our stories include affiliate links. If you buy something through one of these links, we may earn an affiliate commission.
Share
Tweet
Share