J. Stern
March 3rd, 2011
In this article: asus, asus U36Jc, AsusU36jc, core 2010, Core i5, Core2010, CoreI5, nvidia, Nvidia Optimus, NvidiaOptimus, optimus, review, U36J, U36Jc
At this point, it feels like almost every laptop under the sun is being described as "thin and light," but the thinnest and lightest with a standard voltage processor? Well, that's a new distinction, and ASUS claims its 13.3-inch U36Jc is just that. The .76-inch thick chassis tips the scales to just 3.7-pounds, but doesn't skimp on the horsepower or battery life to attain those trim dimensions like some other ultrathin systems out there. Sure, the U36Jc may ditch the optical drive, but it packs a Core i5-460M processor (the "older" Nehalem generation), NVIDIA GeForce 310M graphics, 4GB of RAM, a USB 3.0 port, and a 500GB, 7200rpm hard drive for just $969. Okay, so it doesn't have Intel's latest Sandy Bridge processors, but there are plenty of other reasons we think those who are looking for an ultraportable for under a grand may want to consider the U36Jc. Hit the break to find out what those things are exactly in our full review.
%Gallery-118356%
ASUS
0
SCORE
Engadget
N/A
Critics
1 review
80
Users - Not yet scored
N/A 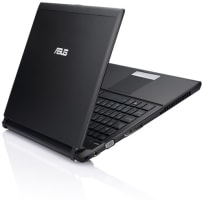 There's nothing crazy about the U36Jc's all-black design, but that's exactly what we like about it. The aesthetic couldn't be any different than ASUS's bamboo clad U33Jc, and in fact, it reminds us more of one of the most minimalistic laptops out there at the moment -- Google's Cr-48. The entire exterior is covered in a matte black, and the lid and palmrest have been treated with a new "silky nanometer coating," which is intended to repel fingerprints. However, while the underside of the system is made of plastic, the lid itself is made of tougher stuff, and according to ASUS it has been "strengthened with aluminum magnesium alloy finish." It doesn't actually feel like metal, but the overall build of the system is much better than most ASUS laptops we've tested in the last couple of years.

Obviously, the most striking thing about the design of the U36Jc is its extremely svelte chassis. The entire system measures just .76-inches thick and the battery only slightly protrudes from the back. Indeed, it's one really thin laptop, and it's pretty perfect for traveling. The 3.7-pound system was easy to pull out of our bag at airport security and it even fit really nicely on the tray table once we were airborne. It isn't as thin or light as the 13-inch MacBook Air (that one's .68 inches thick and 2.9 pounds), but it does have a leg up on Apple's ultraportable when it comes to port selection. The system makes room for two USB 2.0 ports, a USB 3.0 socket, as well as Ethernet, VGA, HDMI, mic, and headphone jacks. There's also a three-in-one card reader on the left edge.

ASUS has been using the same keyboard and touchpad combo on its U series laptops for the past couple of years, and frankly, it's probably time for a change. The chiclet keyboard is decent, but not as solid feeling as the ones on the HP Envy, Pavilion dm1z, or ThinkPad X120e. The rounded matte keys are overly clickly and have a bit too much travel for our liking, but we're sure users who like more feedback will enjoy it. Those complaints aside, we were able to write this entire review and a number of posts at a very brisk pace, though we should mention it was hard to see the black keys on that dimly lit flight. What does it take to get a backlight option on all of these new PCs?

It's with the touchpad that we take the most issue, however. While ASUS switched to using a softer material with the U33JC-A1's mouse bar, this system has a stiff button that makes loud clicking noises when pressed, and overall it's just frustrating to use. We took to just double tapping on the 3.5 x 2.0-inch pad to make selections, but there's the fact that the pad itself is smaller than most.

The U36Jc's two hinges prop the 1366 x768-resolution screen up a good inch above the keyboard, and while it may look a bit awkward, it actually put the display at a pretty nice angle in our cramped coach seat. Despite its glossiness and the equally glossy bezel, the quality of the display itself seems to outdo other ASUS displays – horizontal viewing angles were quite good, and while colors faded when we pushed the screen back to a 45 degree angle, it wasn't a bother in our usage. We also don't have too many complaints about the speakers – they're not the fullest we've heard, but we had no issues hearing Ray William Johnson's latest YouTube video from across a large studio apartment. Music was a bit more muffled, but we really just expect that on this sort of laptop. If you're looking for awesome sounding laptop speakers, Dell's XPS line is the way to go. Oddly, ASUS ditched the webcam cover on this model -- that's right, there's no telling who may be watching you out of the 1.3 megapixel shooter.

Unlike lots of thin laptops roaming the universe (i.e. the Lenovo U260, Dell Vostro V130, etc.), the U36Jc packs a standard voltage 2.53GHz Core i5 M460 processor and 4GB of RAM. Of course, that's now considered to be last-gen with Intel's dual-core Sandy Bridge CPUs just hitting the market this month, but it still provides a really decent amount of power, and our guess is that those in the market for this sort of super portable machine won't complain about how this thing runs. As you can see from the benchmarks below, the rig beat out those other ultra-low voltage machines and even a number of ASUS's previous U series laptops. As you would guess, those numbers translated to speedy everyday performance -- the system handled multiple browsers (Chrome and IE8) with multiple tabs open, TweetDeck, Microsoft Word 2010, Trillian, and Skype without gasping for air. The 7,200rpm hard drive also seemed snappy enough, launching programs without making us twiddle our fingers.

Graphics-wise, the rig automatically switches between the integrated Intel GMA HD graphics and the NVIDIA GeForce 310M GPU thanks to NVIDIA's Optimus technology. There are really no graphics performance surprises here -- just like the U33Jc, the system was able to handle some mainstream games like World of Warcraft at 30fps, and push along both streaming and local 1080p content smoothly. The extra graphics power will also help with video and picture editing, and certainly gives the machine a leg up on others like the Toshiba Portege R705, which relies solely on Intel's graphics to attempt the heavy lifting. Of course, we expect Sandy Bridge laptops with Intel's graphics to give NVIDIA's 310M a run for its money, but we don't have any exact comparison figures on that just yet.

We always worry that thin laptops with standard voltage parts will result in lap-burning temperatures, and sadly, the U36Jc doesn't totally dodge that issue. The underside and left palmrest got quite warm when we fired up Flash videos, and while it's not overly bothersome or as hot as some laptops we've tested (eh hem, the original ThinkPad X100e), it is noticeable.


The best part about NVIDIA's Optimus shutting off the GPU when it isn't needed is the battery savings, and for its size and weight, the U36Jc's endurance is actually quite good. On our video rundown test, which loops the same standard definition video with brightness set at 65 percent, the eight-cell 83hr battery lasted four hours and 30 minutes. That's around the same amount as Toshiba's Portege R705, but not as long as the ULV-powered ASUS UL50Vf. Still, we used the system for the entirety of our five hour flight from Los Angeles to NYC with the brightness cranked up to 90 percent and WiFi on. Also, unlike a lot of these ultrathin systems, you can pop out the cell and replace it. Speaking of things you can pop out, ASUS also makes it fairly easy to get to the RAM on the underside of the system.

For whatever reason, ASUS continues to preload its ExpressGate instant-on OS, which you can boot before entering Windows 7 Home Premium by pressing the extra button above the keyboard. We actually thought it was the power button more than once, which may or may not be ASUS's way of getting people to actually enter the Splashtop-based environment. Very little has changed to the actual ExpressGate interface since ASUS first started using it, and we're still not sure why anyone would spend time in a stripped down environment when you can just be in Windows in a matter of a few more seconds. Other than that, ASUS loads up the system with a good deal of its own proprietary software, including e-Driver, WebStorage, and LifeFrame.

We think it's time to say something we've long thought about ASUS laptops. The company has an extremely great handle on what components are needed to make a really awesome thin and light machine – standard voltage processors, a dedicated GPU, a good sized battery, lots of ports – but it consistently forgets to pay attention to the small details. And in the case of the U36Jc, those details include a wonky mouse button, glossy bezel, and some heat issues. It's those things that hold systems like this one from being the best of the best. Ultimately, we think the $799 Toshiba Portege R705 is still a better value, and while it is thicker than the U36Jc and doesn't have a discrete GPU, it has an optical drive and runs cooler. Still for $969, there's no denying that the U36Jc buys you very very solid performance with five hours of battery life in an extremely trim and well-designed package, and for some that may just be enough.
All products recommended by Engadget are selected by our editorial team, independent of our parent company. Some of our stories include affiliate links. If you buy something through one of these links, we may earn an affiliate commission.