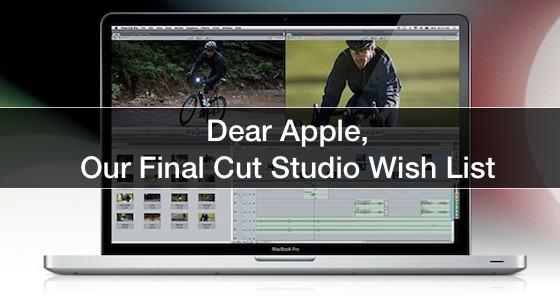 Today the NAB exhibit hall opened, and just about everyone in the video world is showing off the hot new stuff they've been waiting to announce to video professionals from around the world. Apple, however, is notably absent again this year, choosing instead to make an announcement tomorrow evening at the Final Cut Pro Users Group SuperMeet. As rumors of a long awaited update to Final Cut Studio started circulating, we asked you how the new version needed to change.

While some commentators defended Final Cut Studio enthusiastically, most of us feel that an update is long overdue despite our affection for Apple's professional video suite. Some users have already jumped ship because their needs are better filled by alternative editing applications, while other users plan to give Apple a chance to meet all their needs with a new update before deciding to explore other options.

True, many don't find the alternatives any more compelling and will stick with Final Cut Studio regardless of how low priority Apple seems to have made it over the last couple of years. Avid is supposed to be too hard, unstable or expensive, and Adobe's Premiere Pro CS5 -- despite maturing into a powerful app with great integration with other Creative Suite tools -- still has a bad reputation due to its somewhat mediocre history.

You've told us what Apple needs to do to step up their game, and I've organized the feedback into three areas: technical fixes, major changes and new features. It's probably too late for any major revisions to the version on the horizon, but perhaps some discrepancies will be noted by Apple for a future update.

We're all very excited to see what you're unveiling tomorrow. We hope it's a new update to Final Cut Studio that will modernize the suite, catch up to the cutting edge of our fast moving industry and jump ahead with new innovation. We've put together our wish list, and we wanted to share it with you.

First, we want to see some technical updates and better stability.

The times where we need to delete application preferences when Final Cut Pro acts up are long past due. Final Cut Pro needs to run just as consistently as all of your consumer apps; our sanity and our deadlines depend on it. Better yet, could you make preferences modular so that they could be appropriate to individual users and projects?

It would also be helpful if you could revise some of the frequent generic errors to be more descriptive so that we could quickly track down problems instead of taking a 'toss it all and start over' approach.

iMovie shouldn't be able to run laps around Final Cut Pro, so it needs to be fast, ... really fast. We need a 64-bit architecture with multi-core support, GPU acceleration, background rendering and more real-time effects. You helped create the OpenCL standard, so let's see it get utilized in our editor.

Final Cut Pro needs more flexibility with native video formats. We would like to see Final Cut Pro support more formats and get updates on a regular basis -- even if it means breaking away from QuickTime if necessary. In particular, we'd like to see more MXF options, multi-channel image sequences and better compatibility with video from DSLRs, RED cameras and whatever new hardware gets announced this week. No need to get carried away, but we wouldn't say no to 32-bit floating point OpenEXR compatibility with support for arbitrary channels, lossless compression and 4K+ resolutions. Well, maybe that would be a bit excessive, but just a little.

With more flexibility in formats, we are also challenged with more and more applications on more platforms that we need to exchange projects and assets between. Giving us the option to use an XML format natively for projects (rather than just for importing and exporting) would make it easier to fit Final Cut Pro into increasingly complex pipelines.

Second, we'd like to see some changes to major components in the Final Cut Studio family and workflow.

While we have mixed opinions on how much the Final Cut Studio interfaces should be modernized and simplified, we all agree that the they should be more consistently unified and get an aesthetic facelift. Some of us would welcome a more optimized interface inspired by iMovie and Lion -- so long as it doesn't slow us down. Others would prefer that if you do make any major changes, you at least give us the option to run it in a classic UI mode.

Color was a pleasant surprise when you acquired it, but it feels tacked on and poorly integrated into the the Final Cut Studio family. What we would really like to see is the power of Color built directly into Final Cut Pro. Round tripping our projects works, but it would be more flexible for us to be able to change things in real-time without moving between apps. An optimized color grading interface would still be welcome within Final Cut Pro for doing a final grading pass, but keep it in-app.

Likewise, we would like to do more audio editing directly in Final Cut Pro; Soundtrack is still useful on its own for audio-only projects, but having its features integrated within Final Cut Pro would save us a lot of time and further minimize the learning curve.

DVD Studio Pro needs to grow up and become capable of authoring rich media for many different platforms, not the least of which is Blu-ray. Yeah, we know, you don't do Blu-ray. That's cool, but we don't always get to choose which mediums we need to deliver in. Add some awesome authoring options for the Web and iOS, and you'd make us very happy. We all know we want more video iAds, right?

Media management could use a major overhaul. We expect a lot of this may come with Lion or a Final Cut Server upgrade, but one way or another, it needs to be faster and easier to capture assets, catalog them, move them between apps and use them in a multi-user or even multi-studio collaborative environment.

Can there ever be too many ways to implement AppleScript? We don't think so either. Any expansion of AppleScript in the Final Cut Studio apps would be greatly appreciated.

Now that we've taken care of most of the housekeeping, we have

Many of us can't afford a dedicated hardware color grading controller, or we need to be mobile sometimes, and one piece of kit we always have with us is an iPad. We've played with AirGrade, and we're dying to have a three trackball iPad interface built right into Final Cut Pro (and Color if it's still stand-alone).

Another thing that would be very cool is the ability to stream previews directly to our iPads and let us annotate clips, add markers and manipulate metadata where it makes sense. This would be great for taking a break to preview the edit somewhere more comfortable, showing clients and getting their feedback, or to collaborate with other coworkers in the same workplace without forcing them to come to our edit suite. Extra credit if you also add Apple TV support.

We're sure there are more uses for an iPad -- logging clips, doing some kind of storyboarding or a rough sequential edit, multitouch editing in Motion -- we could come up with ideas all day.

We would love to see stronger visual effects and compositing tools built into Final Cut Pro. We know you have a lot of powerful visual effects tools left over from the discontinued (and still missed) Shake. Nodal effects editing that could be applied to clips and tracks directly within Final Cut Pro would be staggering.

Similarly, we'd also like to see some better motion graphics tools in Final Cut Pro so that we can avoid using Motion for simple stuff. It would be fantastic to see the engine from Keynote implemented for titling in Final Cut Pro. At minimum could we at least kern text?

Thanks for listening. We may be professional editors, but we want some of your Apple magic, too. We know you love to deliver the very best.

Sincerely, the readers and friends of TUAW.

PS: We love Thunderbolt and what it could mean for editors; it's fantastic that it's built into Mac hardware, and we can't wait to see what hardware manufacturers do with it!

In this article: Color, DVD Studio Pro, DvdStudioPro, FCP, Final Cut Pro, Final Cut Studio, FinalCutPro, FinalCutStudio, Mac, Motion, NAB, NAB 2011, Nab2011, Soundtrack
All products recommended by Engadget are selected by our editorial team, independent of our parent company. Some of our stories include affiliate links. If you buy something through one of these links, we may earn an affiliate commission.
Share
Tweet
Share