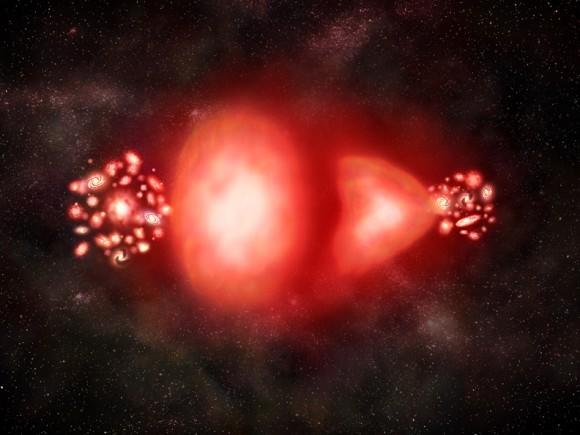 Dark energy, we barely knew you, but before we ever found out if you were, in fact, the invisible hand pushing the cosmos apart, an Italian scientist ginned up a new theory that has anti-gravity doing the Yoko Ono to the universe's merry band of galaxies. Massimo Villata's theory assumes that both matter and antimatter have positive mass and energy density, which gets particles attracting particles and antiparticles attracting antiparticles through the force of gravity. To give dark matter the heave-ho from the galactic expansion equation, Villata supposes that the theory of general relativity applies in reverse to antimatter particles to create anti-gravity. And just as gravity pulls particles together, anti-gravity shoves them apart -- giving the universe its burgeoning waistline, no clown, king, or colonel required.
In this article: anti-gravity, antimatter, cosmology, cosmos, dark matter, DarkMatter, gravity, massimo villata, MassimoVillata, relativity, science, theory of relativity, TheoryOfRelativity
All products recommended by Engadget are selected by our editorial team, independent of our parent company. Some of our stories include affiliate links. If you buy something through one of these links, we may earn an affiliate commission.
Share
Tweet
Share