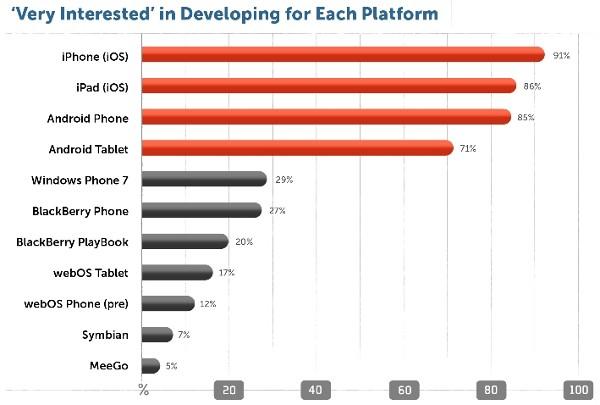 We're taking this with a grain of salt, since it applies only to users of the cross-platform Appcelerator Titanium development environment, but it appears that Windows Phone 7 is facing an increasingly uphill battle for mobile mind-share. At this point it should go without saying that a platform lives and dies by its developers and, according to Appcelerator, they're growing less and less interested in creating apps for Microsoft's smartphone OS. Only 29-percent of devs responded to the company's quarterly survey that they were "very interested" in putting their wares on WP7, a fall of 7 points from last quarter and far less than market leaders Android and iOS. News is even worse for RIM, which saw a fall of 11-points in developer interest for BlackBerry, and now trails the folks from Redmond. Again, this survey is based only on the responses of 2,760 developers using a particular product, so we'd refrain from calling the results incontrovertible. Still, it reinforces something that even a casual observer could discern: BlackBerry and Windows Phone 7 have a tough row to hoe. Two more charts after the break.

In this article: android, Appcelerator, apps, blackberry, developer, developers, development, ios, meego, microsoft, qnx, research in motion, ResearchInMotion, RIM, symbian, web os, WebOs, windows phone 7, WindowsPhone7, wp7
All products recommended by Engadget are selected by our editorial team, independent of our parent company. Some of our stories include affiliate links. If you buy something through one of these links, we may earn an affiliate commission.
Share
Tweet
Share