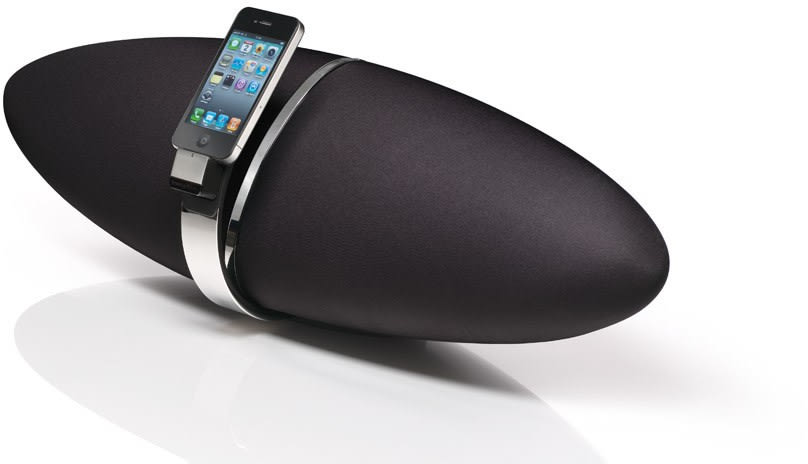 What's that, an alien egg? Nope. Memory foam iPillow? No, silly, it's a Zeppelin, a Zeppelin Air more specifically. Bowers & Wilkins brought us the first iPod-centric Zeppelin in the middle of the great iPod dock flood of '07. A few years later they downsized and brought us a mini version. The logical extension after the advent of AirPlay is here: a Zeppelin that does its thang without wires. We've been beaming music to it for a few weeks now -- wanna find out how our relationship has been? Click through, captain. How would you rate the Zeppelin Air?
We want to hear what you think. Post a quick review now to join the conversation!
Write a review


The first -- and actually, maybe the last -- thing about this dude is how it looks. It's about the size of a traditional over-the-shoulder boombox, 13.5 pounds of mesh-coated minimalism designed to look fierce on your coffee table or bookshelf. There are only three controls on it, nestled behind the elegant chromed iPod stand: power, volume up, and volume down. A tiny pancaked Zeppelin remote gives you standard transport and volume controls, plus an input selector, but in such a slippery form factor we can imagine it spending more time lost between the cushions than controlling the music. Our test unit got enough wolf whistles and loving strokes during its stay in our living room than we care to talk about. It kind of hearkens back to that Sharper Image feeling of 1994: the "I'm a grown-up gadgets guy, check out my slick equipment... if you dare" mentality definitely looms large here.

Pairing your devices with the Zeppelin is kind of an interesting trick: during setup mode, the unit creates a WiFi network that you log into from your computer. Browsing to an internal server application allows you to tell the Zeppelin which network it should log into in the future. Our Zeppelin's server crashed a couple of times during setup, but it wasn't a huge hassle to get the sounds slinging. For all y'all AirPlay newbies out there: you tell iTunes to look for devices on your network, select them as your output, and hit play.

Then the sound comes out! It really does come out, hard, from the Zeppelin. You have to watch your level here because it will blow your hair back, kind of like that guy in that Maxell commercial: we inadvertently woke our roommates up more than once because of the size of the block-rockin' beats that came out of the Zeppelin. Like a lot of these upmarket all-in-one sound systems, Bowers & Wilkins promises "room-filling sound," and we can't really argue with them on that one. Two bass ports around back provide enough oomph to completely overwhelm any conversation that would otherwise be going on in the room. It's not the same feeling that you'd get from a traditional separate subwoofer: whereas floor-based box units normally found in other systems tend to rumble from the ground up, the Zeppelin Air's bass feels somewhat more directional, more a part of the overall mix. It's not a bad thing at all, but it keeps the low end in the air as opposed to coming from the ground up like you might be used to feeling.

As with any minimalist device -- especially one without a screen -- the Zeppelin Air's biggest drawback is the lack of control over its performance. While it will certainly make for a fine constant companion in any room in the house, it's not a device for audiophiles or professionals. That big fat bass pumping out of the Zeppelin Air will do its best to choke out high end in many situations, especially if you're close to the unit. Even after a good deal of EQ adjustment in iTunes, it still feels like there's something holding back the highs, something of a fog keeping them from being all they could be. It's certainly not going to ruin your enjoyment of any song -- in fact, bass freaks could find a perfect match here -- but if you happen to prefer more treble in the mix, this is probably not the device for you.

When we switched back to traditional speakers or headphones, we immediately felt the difference. While our standard systems aren't missing any bass performance, the mix just sounds a lot clearer once you move away from the Zeppelin Air. Don't get us wrong: it's a solid contender as a casual listening device, and will keep most simplicity-minded music appreciators very happy. We just feel like placing so much emphasis on bass, presumably to provide that room-filling sound, is a little bit of a shortcut.

The iPod / iPhone dock, the 1/8" input, and USB output modes all function exactly as they should. We gathered that the iPad can also fit in there, but of course, it'd look a bit silly, and don't forget that there's AirPlay at your disposal. There are even a few neat tricks thrown in, like the ability to use the speaker as a monster-sized USB sync station, and an RCA out for video coming from your iDevice.

We do have gripes about AirPlay itself. It's not instant. There's about a two-second lag between when you press "play" on iTunes and when sound comes out on the other end. The same thing happens when scrubbing throughout the song: any change in play position requires a small but super-annoying gap in your listening experience that doesn't occur with wired speakers. This is, of course, a detail. But it turns out we spend an awful lot of time rifling through our libraries, scrubbing to and fro, which we didn't notice before we used Airplay devices. And, like any wireless system, there is always some inconsistency to the quality of the connection. Our Zeppelin Air seemed to like our 13" plastic MacBook just fine, but didn't play as nicely with other laptops. We're not sure why, but the Zeppelin Air-Macbook Pro connection was considerably more plagued by signal loss over our 802.11n network. We can't point fingers at Bowers & Wilkins for this, though: we've seen these issues in a couple other AirPlay devices before.

We certainly can't recommend it as your primary sound system -- the same or more functionality can be had for many fewer dollars -- but the Zeppelin Air is a really fun device. As a casual auxiliary system, it's hard to beat -- we think it has a lot more panache than Bose's offerings in the same space. It's impressive to behold, the sound is captivating, and it works like a charm once it's been set up: a perfect anniversary present for mom and dad, or a spectacular poolside or kitchen-based appliance, if you're the kind of person who can spare the $600 B&W is asking for. If you are, let us know, and we'll be happy to sling our latest mixtape to your Zeppelin at your next pool party.
In this article: airplay, apple, audio, bowers, bowers and wilkins, bowersandwilkins, BowersWilkins, bw, dock, hifi, ios, ipad, iphone, ipod, music, review, speaker, speaker dock, SpeakerDock, streaming, wilkins, wireless speaker, WirelessSpeaker, zeppelin, zeppelin air, zeppelinair
All products recommended by Engadget are selected by our editorial team, independent of our parent company. Some of our stories include affiliate links. If you buy something through one of these links, we may earn an affiliate commission.
Share
Tweet
Share