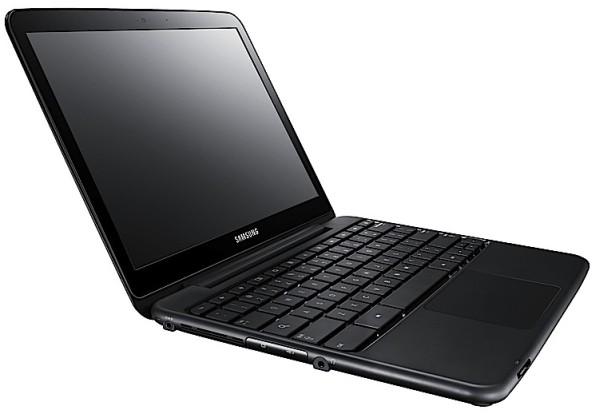 Rumors told us what, when and even how much to expect, but Google just made it official on stage -- Chrome OS netbooks are finally here, and Samsung is leading the way with a ultra-slim 0.79-inch thin machine. This is the Samsung Series 5 ChromeBook, which plays to Google's new standard "Chromebook" spec --in short means they'll each come with a dual-core Intel Atom processor and an "all-day" battery, which Google says will provide 8.5 hours of continuous usage here. Samsung's particular clamshell will have a 12.1-inch, 1280 x 800, 300 nit screen, weigh 3.26 pounds and come with dual-band 802.11 WiFi, optional global 3G, two USB 2.0 ports, an HD webcam and a clickable trackpad that Google tells us has thankfully been revamped since the CR-48. You'll be able to order one from Amazon or Best Buy beginning June 15th. It'll cost $429 for the WiFi version and $499 for worldwide 3G -- which includes 100MB of free Verizon data per month, just like the CR-48. PR after the break.

Update: Amazon's Series 5 listing details some additional specs -- we're looking at a dual-core 1.66GHz Intel Atom N570 chip, a 1 megapixel webcam, and a 16GB mSATA solid state drive here, as well as an SDXC card reader, and VGA-out via an "optional" dongle. The press release also mentions a Li-ion battery good for 1,000 recharge cycles, though it doesn't mention what efficiency will be like after that. "With the creation of the Series 5 we are again pushing the boundaries of innovation by introducing an entirely new product category to the notebook market," said Scott Ledterman, director of mobile PC marketing at Samsung Enterprise Business Division. "This partnership has allowed us to combine Samsung's design and engineering expertise with Google's simple, secure software to provide consumers with a revolutionary notebook to fit today's web-centric lifestyle."

"Samsung's reputation for innovative design and hardware development makes it a great partner to introduce one of the first Chromebooks," said Caesar Sengupta, Director of Product Management, Google. "We look forward to bringing a much better computing experience built around the speed, simplicity and security of Chrome."

The 12.1-inch Super Bright display is both anti-reflective and anti-glare for a consistently vibrant visual experience across a variety of light conditions, from outdoors to dimly lit environments. The Series 5 display's 300nit brightness brings all forms of media alive in vibrant color.

Today mobility is a deciding factor for consumers. The Series 5 weighs 3.3 lbs. and has a battery life of up to 8.5 hours, including five hours of video play for all-day use without the need to recharge. The Series 5 battery has a lifespan up to 1,000 cycles, three times longer than conventional batteries, which reduces the need for replacements. *

The Samsung Series 5 packs power with an Intel® Core™2 Duo N570 1.66Ghz processor, giving you the versatility and performance you need for a one-of-a-kind web experience.

Simple, Secure User Experience
Google developed the Chrome operating system with three key factors in mind: speed, simplicity and security. The average out-of-the-box laptop starts up in 45 seconds. By contrast, the Series 5 starts up in less than ten seconds. When waking from sleep, a user simply opens the lid, and it's ready to go. This means that wherever you are and whatever you're doing, your computer won't slow you down.

For a secure experience, Chromebooks run the first consumer operating system designed from the ground up to defend against the ongoing threat of malware and viruses. They employ the principle of "defense in depth" to provide multiple layers of protection, including sandboxing, data encryption, and verified boot.

The Chromebook has also reduced concerns about security and data loss by moving everything to the cloud. If the Chromebook is ever broken or lost, all of your files are saved online.

When there isn't time for entertainment, the Series 5 can get down to business. Productivity is enhanced with the Chromebook's stylish and comfortable island keyboard, which delivers performance that can't be matched by a virtual keyboard.

Connectivity
Samsung Series 5 will connect you to your data anytime, anywhere through 3G, WLAN and a 4-in-1 Card Reader. Verizon Wireless has partnered with Samsung and Google to provide 3G connectivity for the Series 5 in the U.S. Verizon will provide up to 100MBs per month of Mobile Broadband service included with device for two years. Simple and easy additional data packages are also available for users requiring additional space.

*Battery life will vary depending on the product model, configuration, power management settings, applications used, and wireless settings. The maximum capacity of the battery will decrease with time and use. Test results based on independent third party Mobile Mark (or Battery Mark) tests. Total amount of available memory may be less based on configuration.

In this article: breaking news, Chrome OS, chromebook, ChromeOs, Google, Google IO, Google IO 2011, GoogleIo, GoogleIo2011, IO 2011, Io2011, laptop, netbook
All products recommended by Engadget are selected by our editorial team, independent of our parent company. Some of our stories include affiliate links. If you buy something through one of these links, we may earn an affiliate commission.
Share
Tweet
Share