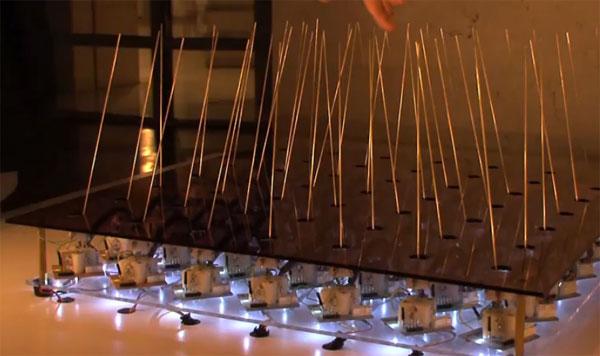 Why would a group of researchers develop a table full of rods that mimic the movements of microscopic hairs? It's a fair question, and Keio University's Yusuke Kamiyama certainly doesn't offer up much in the way of real world applications for such technology. He is, however, happy to demonstrate the cool functionality of the metallic cilium, which appear to drift around as though underwater, until coming into contact with an external stimuli. The rods react to touch by congregating near the area of contact, with movements executed by biometal rods that communicate with an external PC. Scientists hope that research from the project will be useful at some point, but in the meantime, at least we know where to turn if we get a major mucus blockage. Video after the break.

In this article: cilia, cilium, japan, Keio University, KeioUniversity, lungs, robot, video, Yusuke Kamiyama, YusukeKamiyama
All products recommended by Engadget are selected by our editorial team, independent of our parent company. Some of our stories include affiliate links. If you buy something through one of these links, we may earn an affiliate commission.
Share
Tweet
Share