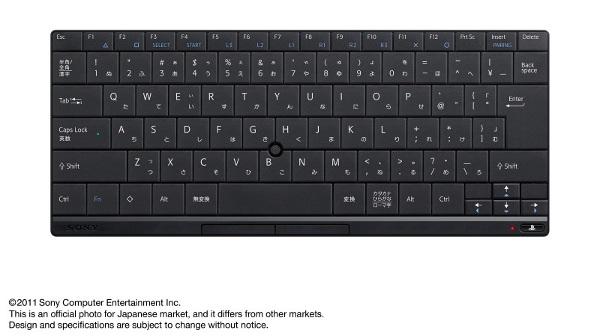 Yesterday, Sony took the wraps off a PlayStation-branded 3D TV and gave us our first serious look at the Vita, but our friends across that big wet thing we call the Pacific scored an extra little hardware goody -- an official PS3 keyboard. If you've ever seen a Bluetooth keyboard there isn't much surprising here, though it does feature a PS button for powering the console on and off. Instead of a touchpad Sony went with a Thinkpad-style nub which will be loved by some, but loathed by others. And don't worry, pairing this thin one-pounder with other devices should be quite simple. Folks in the Land of the Rising Sun can pick one up on June 30th for ¥5,000 (about $62), but there's no word on a stateside release. Treat yourself to the machine translated PR and another pic after the break.

This product, PS button is equipped with wireless controller (DUALSHOCK ® 3/SIXAXIS ®) (sold separately) in the same operation as PS3 ® and turn on / off can be.

In addition to the high design, 19mm Furusaizukipitchi of (interval of keys. From the center of the key, the center distance between adjacent keys) by adopting easy to beat, so you can enjoy a comfortable text input, online games PlayStation ® Home, and text chat, PS3 ® Dejitarurekodakitto private land "torne (Tornado) ™" is a very useful product and in shares. In addition, it has become possible to manipulate the pointer of a pointer stick, PS3 ® with web browsing is also easy to enjoy.

This product also supports the HID Bluetooth ® profiles are, PS3 ® non-PC 2 ※ can also be used for pairing the products beginning with the corresponding profile. Profiles and how to support the pairing, please refer to the instruction manual of the product's use.

SCEJ, as well as attractive Sofutouearainappu Toyotomi Katsu be released in succession, PS3 ® lineup throughout the body and peripherals, PS3 ® platform for further dissemination, we will expand.

Charge of domestic business as the division of Sony Computer Entertainment Inc. 1 ※.

2 ※ This product is with all Bluetooth ® devices with Bluetooth ® connectivity is not guaranteed.

Features:
Bluetooth ® wireless communication by wireless keyboard, mouse can be operated
PS button on the wireless controller (DUALSHOCK ® 3/SIXAXIS ®) (sold separately) into the operation as PS3 ® power / off can be
19mm key pitch

3 ※ And Bluetooth ® profiles, Bluetooth ® functionality is standardized by the characteristics of the device.

※ Bluetooth word mark is Bluetooth SIG, Inc. Unicom, Sony Computer Entertainment Inc. is under license to use the mark.
In this article: accessories, Accessory, bluetooth, bluetooth keyboard, BluetoothKeyboard, japan, keyboard, official ps3 keyboard, OfficialPs3Keyboard, peripheral, peripherals, playstation, playstation 3, Playstation3, ps 3, Ps3, ps3 keyboard, Ps3Keyboard, sony, sony playstation, sony playstation 3, SonyPlaystation, SonyPlaystation3, wireless keyboard, WirelessKeyboard
All products recommended by Engadget are selected by our editorial team, independent of our parent company. Some of our stories include affiliate links. If you buy something through one of these links, we may earn an affiliate commission.
Share
Tweet
Share