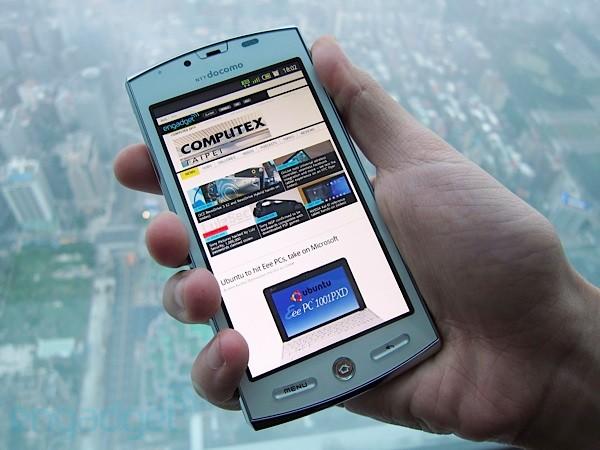 Towards the end of our recent trip to Taiwan for Computex, just as the hustle and bustle was winding down and we'd settled on a bit of sightseeing, we stumbled upon a rare beast -- a smartphone unicorn of sorts -- the Sharp Aquos SH-12C. This 3D-capable Android handset for NTT's Docomo network was imported from its native Japan by a Hong Kong resident who was also attending the epic trade show. Like the HTC EVO 3D, this device features twin cameras and a glasses-free stereoscopic qHD display, so we decided to combine work and play by getting some hands-on time with this mysterious phone right on the observation deck of Taipei 101. Take a look a our gallery below -- complete with foggy views from the 89th floor at dusk -- and hit the break for our hands-on video, first impressions and some camera samples. The Aquos SH-12C we played with was finished in an ultra-sexy shade of pearl white. As you can see in the gallery, it's a touch taller and narrower, but also marginally thicker and heavier than the HTC Sensation and Samsung Galaxy S II. It feels well built despite being primarily made of plastic and looks like a premium handset thanks to a unique and tasteful angular design. Under the hood, it features a snappy 1.4GHz single core Qualcomm MSM8255 Snapdragon SoC with 2100MHz (world) and 800MHz (Japan) HSPA support, 512MB RAM, 8GB of built-in storage plus a microSD card slot, WiFi / Bluetooth / GPS radios, a micro-HDMI output, FeliCa compatibility (NFC), and a 1seg TV receiver. It's running Android 2.3.3 (Gingerbread) with a lightweight TouchWiz-like skin. Sadly, the supplied 1240mAh battery is a little anemic and runs out of steam quickly, according to the owner.

Sharp is well known for dishing out high-end displays and cameras made in-house for its Japanese phones, and the SH-12C is no exception. The 4.2-inch qHD (960 x 540 pixel) glasses-free 3D LCD is just spectacular, with excellent colors, brightness, and contrast as well as decent viewing angles. On the imaging front, the Aquos trumps the EVO 3D with twin 8 megapixel autofocus cameras with flash and autofocus assist light. But just like Sprint's flagship, it takes 3D pictures at 2 megapixels (in MPO format only) and captures 3D video in 720p at 30 fps, with the left and right frames being squeezed into a single 1280x720 pixel H264 frame. 720p is also the maximum resolution for 2D video recording, but 2D stills are shot using the full 8 megapixels. Check out the sample gallery and sample videos below -- the first three photos and first video are anaglyphs and require red / cyan glasses for the full 3D effect.