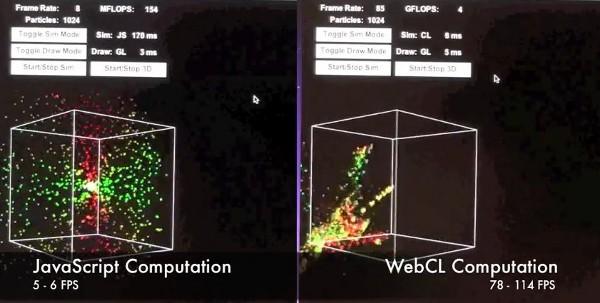 Look, WebGL is great and everything but, in the era of general-purpose GPU computing, we know our 3D chips are capable of much more than just pushing pixels. WebCL is a new standard that brings OpenCL processing to the browser, leveraging the power of your graphics card to perform complex computations. Samsung and Nokia have both released prototype plug-ins, with Sammy's running exclusively in Safari on OS X using NVIDIA chips and Nokia focusing on the 32-bit Windows version of Firefox 4 and AMD GPUs. At the moment, the young technology doesn't offer much to the average user, but demos (after the break) show just how much faster OpenCL can be than traditional JavaScript -- more than 10-times quicker on some tests. Let the countdown to Folding@Home the Web App begin -- we're starting a pool now.

In this article: amd, firefox, firefox 4, Firefox4, gpgpu, gpu, GPU acceleration, GpuAcceleration, nokia, nvidia, openCL, safari, samsung, webcl, webgl
All products recommended by Engadget are selected by our editorial team, independent of our parent company. Some of our stories include affiliate links. If you buy something through one of these links, we may earn an affiliate commission.
Share
Tweet
Share