Latest in Dvd only

Netflix admits it will end up with fewer subscribers than predicted, shrinks DVD-only count

Netflix officially separates DVD, streaming pricing; $15.98 and up for both 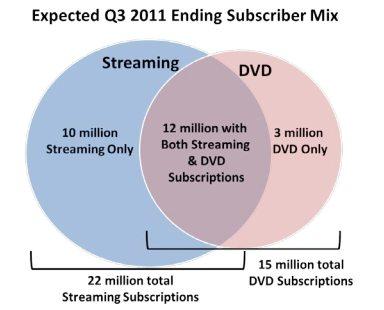 If you were still wondering why Netflix chose right now to split apart its unlimited DVD and streaming movie plans you need look no further than the just released Q2 financial report. According to the numbers, 75 percent of new subscribers were picking streaming only plans, while the total number of people on the hybrid DVD / streaming plan had actually decreased slightly, even as it breached 25 million subscribers worldwide. Of course, it did notice the intense backlash to the new rates, but predicts that after the hit of cancellations by the end of the third quarter it will still have 22 million people subscribed to streaming, 15 million total subscribed to DVDs, and about 12 million customers with both. Waiting on that Facebook integration? Don't hold your breath, while the new features are due to launch soon in Canada and Latin America, it claims ambiguous wording in the Video Privacy Protection Act is holding things back domestically.

Other details include confirmation it will not look into purchasing Hulu, and that it's still negotiating a renewal of its deal with Starz. While the DVD business may have peaked, it's not quite dead yet and Netflix indicated it will start marketing that feature again in the fourth quarter. Click the source link to paw through the PDF yourself, we'll be keeping an ear tuned to the investor call later to find out exactly what the company's executives are thinking.
In this article: dvd only, DvdOnly, earnings, facebook, netflix, q2, streaming, streaming only, StreamingOnly, subscribers, watch instantly, WatchInstantly
All products recommended by Engadget are selected by our editorial team, independent of our parent company. Some of our stories include affiliate links. If you buy something through one of these links, we may earn an affiliate commission.
Share
Tweet
Share