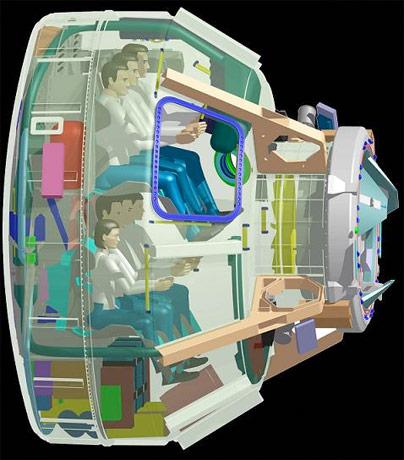 Day job just too darn terrestrial? Maybe you should score a gig at Boeing, which'll apparently sling two of its very own into space come 2015. What'll be their chariot? The company's CST-100 -- you know that spiffy capsule that can hurtle a lucky seven humans 100km into the dark abyss. Strapped to ULA's Atlas V, the crew will follow two unmanned missions, eventually reaching the International Space Station. If that all goes to plan, commercial service will start in 2016. Now about those extra five seats...
Show full PR text
Boeing Selects Atlas V Rocket for Initial Commercial Crew Launches

"This selection marks a major step forward in Boeing's efforts to provide NASA with a proven launch capability as part of our complete commercial crew transportation service," said John Elbon, vice president and program manager of Commercial Crew Programs and the source selection official for Boeing.

If NASA selects Boeing for a development contract with sufficient funding, ULA will provide launch services for an autonomous orbital flight, a transonic autonomous abort test launch, and a crewed launch, all in 2015.

The addition of ULA to the Boeing team enables the start of detailed design work on an integrated system for launch and spacecraft operations. The team also will refine launch abort operations that will meet NASA's stringent human rating requirements to safely transport crew and cargo to the International Space Station. Boeing conducted a best-value competition among U.S. launch service providers prior to selecting the Atlas V.

"We are pleased Boeing selected the Atlas V rocket and believe it is the right vehicle to help usher in the new commercial era in human spaceflight," said George Sowers, ULA vice president of Business Development. "The Atlas V is a cost-effective, reliable vehicle and ULA stands ready to support Boeing's commercial human spaceflight program."

Boeing plans to begin wind tunnel testing of the Atlas V and the CST-100 this year and will use the results to complete a preliminary design review of the integrated system in 2012 under the second round of its Commercial Crew Development Space Act Agreement with NASA.

The CST-100 is a reusable, capsule-shaped spacecraft that includes a crew module and a service module. It relies on proven, affordable materials and subsystem technologies that can transport up to seven people, or a combination of people and cargo.

A unit of The Boeing Company, Boeing Defense, Space & Security is one of the world's largest defense, space and security businesses specializing in innovative and capabilities-driven customer solutions, and the world's largest and most versatile manufacturer of military aircraft. Headquartered in St. Louis, Boeing Defense, Space & Security is a $32 billion business with 64,000 employees worldwide. Follow us on Twitter: @BoeingDefense.
In this article: Atlas V, AtlasV, Boeing, Boeing CST-100, BoeingCst-100, capsule, CST-100, international space station, InternationalSpaceStation, rockets, space, space capsule, space station, space travel, SpaceCapsule, SpaceStation, SpaceTravel
All products recommended by Engadget are selected by our editorial team, independent of our parent company. Some of our stories include affiliate links. If you buy something through one of these links, we may earn an affiliate commission.
Share
Tweet
Share