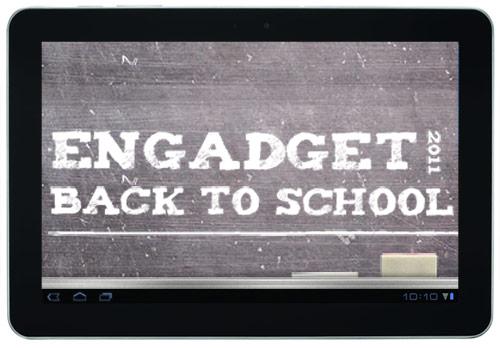 Welcome to Engadget's Back to School guide! We know that this time of year can be pretty annoying and stressful for everyone, so we're here to help out with the heartbreaking process of gadget buying for the school-aged crowd. Today, we're leaning back with our tablets -- and you can head to the Back to School hub to see the rest of the product guides as they're added throughout the month. Be sure to keep checking back -- at the end of the month we'll be giving away a ton of the gear featured in our guides -- and hit up the hub page right here!

There are certain back to school purchases we could never talk you out of. A laptop? Vital. A smartphone? Highly recommended. A printer? Necessary -- if you're the kind of person who finishes papers minutes with minutes to spare, leaving no time to swing by the computer lab on the way to class. But a tablet? We'll be honest: we can't think of a good reason why you need one, but we can more than sympathize if you're dead-set. We've picked a few noteworthy choices for each budget, though if you're really lucky you'll win one of 15 Samsung Galaxy Tabs and won't have to pay a dime. Simply leave a comment below to be entered to win, and check out our giveaway page for more details. So wipe off the glasses, grab your clicker, and get ready to jump past the break for this year's tablet picks for back to school.

This is for the kids who've never been able to justify blowing hundreds of dollars on a tablet -- not when they already own a laptop and a smartphone, thankyouverymuch. An even cheaper than buying an Iconia Tab A100 or the Costco-exclusive Vizio Tablet would be to go for the Android-packing Nook Color -- one of our favorite e-readers in its own right. While you'll miss out on goodies like a GPS radio and gyroscope, you'll have more than enough power for checking email and reading Engadget between classes.

As the first 7-incher to run Android 3.2, the A100 is faster than its bargain-basement price would suggest. If you can deal with the skimpy battery life and chintzy design, it's got the chops to be a solid little multimedia device.

The 8-inch Android tablet that impressed us with its high-density display and clean design went on sale this month for $30 less than expected. Though it has just 2GB of available storage, you should be golden if you add a microSD card.

On its own, the Transformer offers a minimalist design and gorgeous IPS display, but add the $150 dock and it gains a full keyboard, two USB 2.0 ports, an SD slot and up to 6.5 additional hours of battery life. We vote this the tab most likely to render your netbook obsolete.

HP's inaugural webOS slate with inductive charging just got a lot more tempting thanks to a $100 price cut and a software update promising a speed and performance boost.

The Thrive offsets its thick, toy-like build with solid performance and an array of ports you're not likely to find on other tablets, including USB and HDMI sockets, and a full-sized SD slot.

This was a tough call: since we published our iPad 2 review, the slate that Steve built has met its hardware match in the Samsung Galaxy Tab 10.1. Sure, we hope the next-gen model packs a higher-res screen and improved cameras, but ultimately, the iPad still trumps the competition when it comes to software. With over 90,000 apps, the tablet's become something of a Swiss Army Knife among slates, and we don't see developers reversing their prioritization of iOS anytime soon. Now, if only we could get a Facebook app...

The Galaxy Tab 10.1 is handsome, solidly built and pinch-thin. It also offers a stunning 1280 x 800 display and is one of the fastest tablets we've tested. Since we reviewed it, Samsung's also layered its TouchWiz UX on top of Android 3.1 -- a move that brings the user experience more in line with what you'd expect from Samsung's handsets.

No, it doesn't run Honeycomb, but the Flyer remains one of our favorite 7-inch tablets, thanks to its attractive (and durable) aluminum design. It's also one of the few consumer slates offering pen input, making it the rare tab you might actually use for taking notes. That notepad app, by the by, is superb, helped in large part by excellent handwriting recognition software.