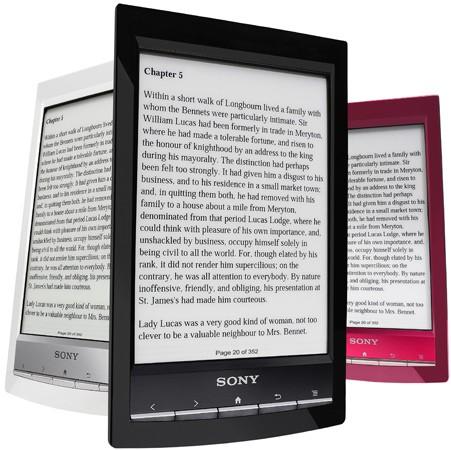 Sony's just been showing off its Reader Store for the Android-powered Tablet S and Tablet P, but it hasn't forgotten its more eye-friendly options. Announced at IFA just now, the self-explanatory Reader Wi-Fi (PRS-T1) claims to be the world's lightest 6-inch e-reader with an "enhanced" touchscreen -- the "enhanced" bit referring to its "Clear Touch Infrared" technology that supports multitouch for pinch-to-zoom, though it's also bundled with a stylus. At 168 grams (5.93 ounces) light and 8.9mm thin, this device packs a 600 x 800, 16-level gray scale E Ink Pearl display, along with 1.3 GB of usable internal storage plus microSD expansion of up to 32GB.

The built-in 802.11b/g/n WiFi connectivity also lets users wirelessly borrow eBooks from public libraries -- a first for e-readers, apparently -- in the UK, US, and Canada. As for battery life, a single battery charge will keep digital bookworms busy for up to three weeks with WiFi enabled, or up to a month without WiFi (based on a half-hour reading time per day). Expect this ePub-compatible Reader Wi-Fi to hit the US and Europe in October for around $149, and it'll come in a color choice of either red, white or black. Press release after the break.

Update: We now have confirmation that this reader is running on a heavily disguised Android (which is somewhat hinted by the buttons, anyway), so yeah, let the rooting begin!
Show full PR text
Sony Introduces World's Lightest 15.2cm (6") eReader with Enhanced Touchscreen

· Hold effortlessly in one hand: just 168 grams and 8.9mm thin
· Browse and download a huge range of eBooks via Wi-Fi
· Turn pages smoothly, zoom in and out, look up in dictionary or make notes, all on advanced, high-contrast touchscreen
· Borrow eBooks directly and wirelessly from your public library
· Over one month of battery life* lets you read without recharging on holidays or trips away
· Available in three fashionable colours: red, white and black

Treat yourself to the most natural and immersive reading experience with the new Reader™ Wi-Fi® (model PRS-T1) from Sony – the world's lightest1 15.2cm (6") eReader that also features an enhanced touchscreen.

Now with Wi-Fi, Reader gives you the additional freedom to buy, borrow or get eBooks for free wherever there's a wireless connection available.

From the latest releases to popular titles and classics, it's easy to browse and download titles in seconds from a huge range of compatible bookstores and other web sites. You will also be able to purchase and download eBooks and periodicals via Wi-Fi from the rapidly-expanding catalogue available at the Reader™ Store2. What's more, Reader Wi-Fi is the worlds' first3 eReader that will allow you to borrow eBooks wirelessly from public libraries thanks to simple, seamless access on the device4 via an on-screen 'Public Library' icon.

Slipping effortlessly into a bag or pocket, Reader Wi-Fi is no bigger than a paperback book. 8.9mm thin and weighing just 168 grams it's supremely comfortable to hold, with a gently curving profile that fits naturally in your hand.

Enjoying your favourite book is even more of a pleasure with the advanced Dual Touch screen. E Ink® Pearl electronic paper displays a clear, glare-free, high contrast image that's easy to read for hours, even in direct sunlight.

Touch the screen to choose a book. Swipe a finger to turn the page, or zoom in and out by pinching your fingers together or apart. Tap on a word and hold to find its meaning from two built-in English language dictionaries. Words can also be translated to and from English using ten built-in translation dictionaries. You can even write notes on the page or highlight text with a finger or the supplied stylus – just like a real book.

Finding your way around the longest title is refreshingly quick and intuitive. Bookmark pages and return to them instantly, or search for particular passages and jump straight to the text you're looking for.

While you're reading, get extra information easily on a word or phrase with in-text access to Google™ and Wikipedia® look-ups. A simple browser also lets you download other compatible5 documents from the web via Wi-Fi for easy reading while you're on the move.

Reader Wi-Fi handles a wide range of digital formats, including the popular EPUB eBook standard plus PDF and TXT documents. View your collection of digital photos on screen, or plug in a pair of headphones and listen to stored music tracks while you're reading. The front cover image of your current title or a favourite photo can be displayed as a screensaver when Reader is in standby.

Fine-tune your reading experience with eight adjustable font sizes plus a choice of six font styles. Screen contrast and brightness are easily adjusted for comfortable viewing in any lighting conditions.

Its long battery life lets you read for over one month without needing a recharge (3 weeks with wireless on). Reader Wi-Fi can be used while the battery charges via USB on a connected PC, so there's no need to interrupt your favourite book.

With a capacity of 2GB – enough to hold around 1,200 eBooks – internal memory space is easily expanded with an optional microSD card to hold tens of thousands more.

Style-matched optional accessories for your Reader include a form-fitting cover with built-in lighting arm that angles for reading at night or in dimly lit places.

Sony's first offer in its collaboration with J.K. Rowling's eagerly anticipated Pottermore website (www.pottermore.com) is a specially-created limited edition of Reader Wi-Fi (PRS-T1) which includes a voucher that enables Harry Potter fans to download the first Harry Potter eBook title, Harry Potter and the Philosopher's Stone, from Pottermore. Pottermore, a unique website which builds an exciting and immersive online experience around the Harry Potter books and is the exclusive retailer of the Harry Potter digital eBooks, is partnered by Sony.

Reader Wi-Fi (model: PRS-T1) by Sony is available in Europe from October 2011, depending on country.

2 Reader Store will soon be available in Europe, coming first to the UK, Germany and Austria in 2011.

4 Requires valid library card. Device feature - available only in UK, US, and Canada.