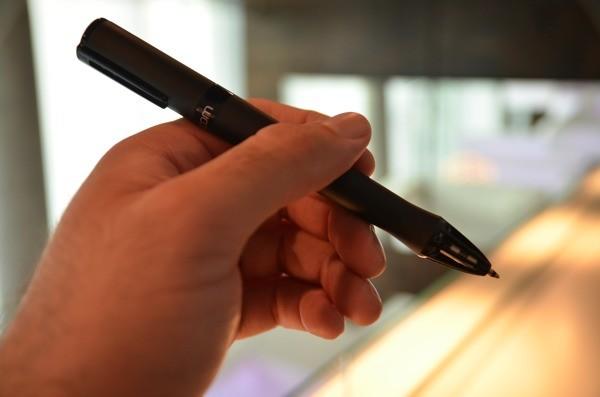 Wacom's new digital pen can't help but stand out from the competition. It's a specialized device that makes no apologies for catering to graphics enthusiasts at the expense of casual note-takers. Moreover, it does something pretty amazing: instead of just turning your sketches into simple bitmaps, it can also export them as vector-based images with multiple layers, which means they can be directly used as the basis for more complex and final art. The Inkling will cost £150 ($230 converted) when it reaches European stores in October, but in the meantime we've got some early hands-on impressions right after the break.


The Inkling comes in a funky travel case that doubles-up as a USB charger for both the pen and its accompanying receiver. It also has slots for spare standard-sized ball-point nibs, which looked great all lined up like little soldiers of creativity. Unfortunately, the interior plastic felt cheap in some places, particularly around the hooks for the USB cable. This lent the case an air of "good from far; far from good" and we think Wacom missed an opportunity to come up with something more special.

The pen is released with a nice push-to-pop motion and, once freed, it seemed thin and light enough for comfortable use -- although we only had time to draw a few scribbles with it. It's still significantly thicker than a plain ball-point pen because it contains IR and ultrasonic components needed to communicate its precise movements to the receiver.

The receiver is small, light and easy to forget about when it's attached to the top, bottom, side or corner of your notebook -- you can clip it wherever it feels most out of the way, so long as it has line-of-sight to the pen at all times. It has two buttons: one to power on (which we can just imagine forgetting to press) and one to start a new layer, allowing you to separate out different stages of your drawing for when you come to work with its digital doppelganger.

There's a dedicated LED that flashes green every time you draw something, reassuring you that your masterpiece is being received loud and clear. This connection will be easily broken if your hands get in the way -- for example if you use a ruler without being careful -- or if you try to use the receiver on anything bigger than A4/Letter-sized paper. Finally, the clamp only opens wide enough to grip up to around 10 sheets of notebook paper, so don't even think about clipping it onto a drawing board.

You need to use Wacom's own software to translate the raw files on the receiver into something usable on your PC. If you created separate layers while sketching, each one is displayed as a separate page in the software, which can be exported or treated (e.g. colored) on its own. Alternatively, you can export the whole lot, either as a bitmap with a default resolution of 600dpi, or as a vector. If you want to export the whole sketch but still keep each layer separate in your final graphics page, then you needed to be using Photoshop, Illustrator, Sketchbook Pro or Sketchbook Designer. Photoshop Elements, CoralDraw and other titles won't import multi-layer files from Wacom's software.

Stay tuned for our full review of the Inkling (from a member of the Engadget team who can actually draw) when it finally becomes available in the next few weeks.

Digital sketch pen bridges the gap between traditional, freehand sketching and digital development by capturing a digital likeness of a pen-on-paper sketch.

Today, Wacom® introduces Inkling, a new digital sketch pen that captures a digital likeness of your work while you sketch with its ballpoint tip on any sketchbook or standard piece of paper.

Designed for rough concepting and creative brainstorming, Inkling bridges the gap between paper sketching and digital drawing by giving users at the front end of the creative process a way to rough-out ideas with real ink on paper and capture their concepts digitally so that they can be later refined on their computer. Inkling even allows users to create layers in the digital file while sketching on paper in the following creative software applications: Adobe® Photoshop®, Adobe® Illustrator® and Autodesk® Sketchbook® Pro.

Virtually anyone who uses sketching to capture their creative ideas and wants to have their drawings in a digital format to e-mail, archive or further refine on their computer can benefit from Inkling. For example, artists, illustrators, or storyboarders who appreciate the convenience, speed and spontaneity of loosely sketching their ideas on paper could profit from the capabilities of Wacom's Inkling digital sketch pen. In everyday use, a graphic designer could use Inkling to create rough concepts on paper for a new advertising campaign and then review and share these concepts on the computer with colleagues or clients. The pen and receiver store and recharge in a compact case making it easy to transport Inkling between, home, office, hotel or any typical workspace.

"Inkling's inspiration comes from a desire to give artistic people the freedom to draw on paper and to provide an easy way to transition the drawings to digital media," said Guido Möller, product manager professional brands at Wacom Europe.

The Inkling digital sketch pen is comprised of both hardware and software components. Hardware includes both the pen and a wireless receiver that captures a likeness of the sketch and stores it digitally. The ballpoint pen uses Wacom's pressure sensing technology (1024 levels of sensitivity) to detect how hard the pen is being pressed to the paper while sketching. These pressure variations will appear in the digital version of your drawing.

The receiver can be clipped to the edge of standard paper or sketchbooks and the position can be adjusted for left- or right-handed users to provide the receiver with an uninterrupted line of sight with the pen tip. When sketching is complete, the receiver is connected to the user's computer via USB to transfer the digital files. Files can be opened with the included Inkling Sketch Manager software to edit, delete or add layers as well as to change formats and transfer the files for adjustment and editing in creative software applications.

Inkling can store thousands of sketches and export layered files directly to Adobe Photoshop and Illustrator (CS3 or newer), as well as Autodesk Sketchbook Pro (2011). Alternatively, files can be saved in JPG, BMP, TIFF, PNG, SVG and PDF formats for use with other applications. According to Möller, "Inkling's support of raster based applications such as Adobe Photoshop, as well as vector based applications such as Illustrator and Autodesk Sketchbook Designer, will provide users with options for incorporating their preliminary sketches into further developed work".
The Ideal Companion for Intuos® and Cintiq®

Users of Wacom Intuos pen tablets and Cintiq interactive pen displays gain extra benefits by adding an Inkling to their creative toolbox. "For those working with our professional products, the pen is already their input tool of choice," continued Möller. "Inkling can deliver an immediate ROI to these users by delivering an accelerated and more mobile workflow resulting in digital files that can easily and quickly be transferred to their home or office computer and redrawn using the Intuos or Cintiq pen."

The new Inkling sketch pen is priced at 149.99 ￡ (including VAT) and will be available from October 2011 onwards.

Find out more about Inkling at http://inkling.wacom.com or have a look at the product video product video on Wacom Europe's YouTube Channel at http://www.youtube.com/watch?v=3fQe0YSLm88 .

In this article: digital, digital pen, DigitalPen, draw, drawing, graphics, hands-on, imaging, Inkling, layers, Photoshop, professional, sketch, sketchbook, sketching, video, Wacom, Wacom Inkling, WacomInkling
All products recommended by Engadget are selected by our editorial team, independent of our parent company. Some of our stories include affiliate links. If you buy something through one of these links, we may earn an affiliate commission.
Share
Tweet
Share