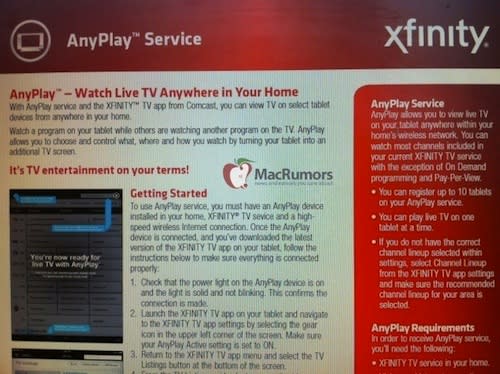 Comcast has been talking about adding live TV streaming to its Xfinity TV tablet apps for a while, but now this screenshot of a product page from MacRumors indicates it could be launching very soon. It requires an AnyPlay box -- a Comcast brand name for the Motorola Televation cable TV-to-IPTV box shown off in June and previously a portable DVR concept from Panasonic -- that will allow viewing over the local network on compatible devices, including iPads, Android tablets and the like. There's also been recent rumors of Microsoft seeking a tie-in to bring live streams from Comcast to its Xbox 360, which could be eventually be enabled by a device and service like this. According to the page, it includes access to "most" channels, and can register up to ten tablets, but only allows for viewing on one at a time. Time Warner and Cablevision have already rolled out live TV streaming on their tablet apps, we'll see if this in-home Slingbox-approach can avoid their licensing issues.
In this article: android, anyplay, app, apple, cable, cable tv, CableTv, comcast, hdpostcross, honeycomb, ipad, iptv, live tv, live tv streaming, LiveTv, LiveTvStreaming, motorola, motorola televation, MotorolaTelevation, tabelt, tablet app, TabletApp, televation, wifi, xfinity tv, xfinity tv app, XfinityTv, XfinityTvApp
All products recommended by Engadget are selected by our editorial team, independent of our parent company. Some of our stories include affiliate links. If you buy something through one of these links, we may earn an affiliate commission.
Share
Tweet
Share