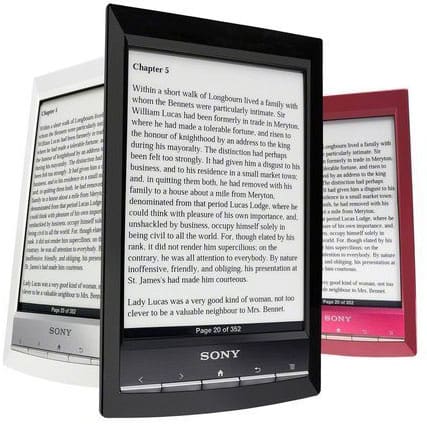 Sony's timing could have been better with the Reader WiFi PRS-T1. The device, which was unveiled back at IFA in late August, is set to launch within a fortnight. In the intervening time, Amazon, the clear leader in the space, unveiled two new readers -- the fourth-generation Kindle and the Kindle Touch. Sony's got a ways to go if it's going to become a dominant force in the e-reader market outside of its native Japan, alongside the Kindle and the Nook. The PRS-T1 certainly takes some steps in that direction, both in terms of pricing and features -- but is it enough to get consumers to stand up and take notice? Find out in our review after the break.

Sony's new WiFi reader offers a lot of extras that don't come with the latest Kindle -- but the bells and whistles come at a bit of a premium.

How would you rate the Reader PRS-T1?
We want to hear what you think. Post a quick review now to join the conversation!
Write a review

The PRS-T1 will look familiar to anyone who has spent time with a Sony reader. It's long and slender, with a series of silver buttons lining its bottom bezel: menu, back, home and two arrow keys. On the bottom of the device is a power button, micro-USB port, reset hole and a headphone jack, which can be used to listen to MP3 and AAC files -- functionality stripped from the new Kindle and unavailable on the current Kobo and Nook devices.

The reader will ship in three different colors: red, black and white. The black number we tested has a glossy front plate and a lighter, matte back. At 6.9 inches, the device is a bit taller than the 6.5-inch-tall Kindle, though it's a few fractions of an inches slimmer, fitting quite easily into a pant pocket. At 5.9 ounces, the reader's being touted as the lightest six-inch reader on the market, and indeed it beats out the 5.98-ounce Kindle -- but just barely.

Like the Reader Pocket Edition before it -- not to mention the Kobo, Nook and Kindle Touch -- the Reader WiFi has an IR touchscreen, allowing you to flip through pages with a swipe. There are no page buttons on the sides of the screen, but if you're really into using physical buttons to turn pages, the arrow keys on the bottom left are easy to press when holding the device in one hand.

The reader comes with 2GB of internal storage -- that's on par with most of the current generation readers, plus, like the Nook and Kobo, there's a microSD slot to expand things a fair amount. As suggested by the name, this device also has built-in WiFi -- an otherwise standard feature that was sorely lacking on the entry-level Sony Reader Pocket Edition that we reviewed late last year.

The six-inch screen has 600 x 800 resolution and is capable of displaying 16 levels of grayscale -- the same specs as the new Kindle. Also like the Kindle, the Sony is built around E Ink's sharp Pearl technology -- the standard for the current generation of readers. The touch technology is quite responsive, allowing you to scroll through pages in the browser with a far less noticeable lag than on the Nook. The page rate matches the Kindle, Nook and Kobo devices, though unlike those readers, the PRS-T1 does a full refresh with every turn, momentarily flickering black. On the bright side, the display supports to pinch to zoom, which feels rather slow on detail-heavy web pages, but otherwise works quite well with text, letting you adjust size with ease.

The device's primary home screen is all about reading, offering up your current book, three recently downloads and links to your library, periodicals, the Reader Store and Collections (i.e., all of the books and periodicals on the reader). An arrow at the bottom of the screen brings you to a second page that reveals just how many bells and whistles the Reader WiFi offers. At the top are Network selections: Public Library, Google Books, Browser and Purchased Content.

Clicking into Public Library will bring you to an Overdrive portal via the browser. Entering your location brings up a list of local library branches. If your local library is on the list, you can check out a book using a library card number -- it's a lot like using the Reader Store, only with no fee, a download limit, an expiration date on the books and, of course, frequent waiting lists. Of course, we can hardly dock Sony for the latter, and having library content so easily accessible on the device is certainly a plus, but hopefully our local library system will start offering up more digitized content in the near future.

The browser is fairly bare-bones, as it is on all of these E-Ink reading devices, with a field at the top for entering URLs. From there you can bookmark your favorites and access your browsing history. You swipe to turn pages and you can zoom either by pinching or clicking the magnifying glass that pops up when you scroll.

Not too long ago, iRiver was pitching the inclusion of Google Books as a major selling point for its Story HD reader. Of course, there was nothing stopping other companies from adding the functionality to their devices, and as such, Sony is offering up the site as a resource for getting content on the WiFi Reader. Again, any e-reader with a browser can access Google Books, but it's a nice to have access to free, public domain books on the home screen.

Moving along, there's the Reference section, which features a link to the device's built-in New Oxford American Dictionary and buttons for Handwriting and Text Memo. The Text Memo feature offers up the virtual keyboard for entering simple notes. The Handwriting feature, meanwhile, takes advantage of the reader's touchscreen to let users make handwritten notes and draw pictures. The handwriting functionality is surprisingly responsive, making it possible to draw and write with a fairly fine point, making even our often difficult to read cursive legible. Neither are totally necessary, as many e-reader owners likely also have a smartphone with similar functionality, but they're certainly nice bonus features on a device like this.

The secondary home screen also includes a Multimedia section, with buttons for stored images and audio files that have been dragged onto the device via USB. The audio player offers up some basic functionality, including the ability to play / pause, adjust volume, skip and advance through tracks and even display cover artwork for the song that's playing. The music will continue to play as you read, so you can listen to your Stravinsky while reading Dostoevsky.

Amazon Flow strikes low blow to brick and mortar, converts barcode scans to online sales
Kindle 3 gets software upgrade, ready to soar into the cloud
Apple reveals iBook Store and app for the iPad
When you're reading, the text monopolizes the entire page, save for a page number at the bottom. The text can be adjusting by pinching or bringing up the menu, which offers up seven font styles and eight sizes. Also in the menu are options for making notes on the text by typing or drawing directly on the page using the touchscreen. Tapping the top right corner of a page will dog-ear it, bookmarking it for later. Touching and holding a word highlights it, bringing up options to add a note, find all other instances of it in the book and search for it on Wikipedia or Google.

Once dragged onto the device, PDF files will appear in the Books section. As with other readers, the overall experience of viewing PDFs is laggy. They take a while to load, and the whole thing stutters a bit when you try to scroll. Thanks to the WiFi Reader's dual-touch functionality, however, you can pinch to zoom the PDF images and scroll across using a finger. Despite its limitations, this is the best PDF reading experience we've seen in one of these devices thus far.

There's a lot to like about this new guy. The WiFi Reader has a lot of compelling functionality, including dual-touch pinch to zoom, handwritten note taking, audio playback and built-in access to public library and Google Books content. At $149.99, it's also quite reasonably priced for a Sony reader, down $30 from the Sony Reader Pocket Edition (which, it's worth noting, failed to include WiFi). That number still marks a premium over the $79 starting price for the new ad-supported Kindle and the $99 ad-supported Touch, and with that in mind, don't expect Sony to overtake Amazon on these shores any time soon.
In this article: e book, e books, e reader, e readers, e-book, e-books, e-reader, e-readers, PRS-T1, Reader WiFi, Reader WiFi PRS-T1, ReaderWifi, ReaderWifiPrs-t1, review, sony, Sony Reader WiFi, sony Reader WiFi PRS-T1, SonyReaderWifi, SonyReaderWifiPrs-t1, video
All products recommended by Engadget are selected by our editorial team, independent of our parent company. Some of our stories include affiliate links. If you buy something through one of these links, we may earn an affiliate commission.
Share
Tweet
Share