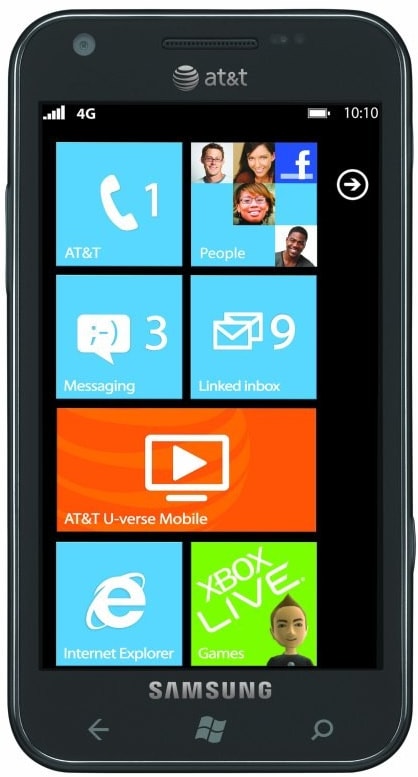 The deluge of Mango devices isn't over yet. Hot on the heels of the Lumia 800, the Titan, Radar and the wallet-friendly Focus Flash comes the Samsung Focus S. There's not a whole lot of mystery to Sammy's flagship Windows Phone 7.5 handset. It's not terribly different from many of its cousins packing Microsoft's mobile OS and, other than size, there doesn't seem to be anything separating it from its little brother, the Flash. What, then -- aside from a few Galaxy S design touches -- does Focus S offer your high-end smartphone dollar? And are those differentiators enough to make it the clear choice when shopping for WP7 device -- especially when considering the $150 premium AT&T is asking for, over the surprisingly satisfying Flash. Head on past the break to find out.

A solid phone that doesn't quite feel deserving of its high-end price.

How would you rate the Focus S?
We want to hear what you think. Post a quick review now to join the conversation!
Write a review

If you've ever held a Galaxy S II you should immediately feel at home with the Focus S. They're both cut from the same cloth (or sheet of plastic, as it were). The larger of Samsung's Windows Phone 7 devices is an entirely synthetic affair. The edges of the handset are the same glossy black polymer that has come to define the Korean manufacturer's products over the last few years. Thankfully, the company has continued its recent trend of using textured, matte battery plates that, while not any more robust than their high-sheen counterparts, feel quite a bit nicer. That pleasant feeling disappears the moment you have to remove that rear covering, however. The seemingly flimsy plastic is the same as that found on the GSII. It's proven fairly resilient, but it bends dramatically as you pry it from the rear by sliding your fingernail underneath the top right-hand corner.

On the left side of the device is the volume rocker, a relatively clicky bar that doesn't seem to travel much in either direction. Moving to the right edge you'll find the power button and the dedicated, dual-stage camera key that positively runs circles around that on the Flash. Though the initial press to focus could stand to put up a little more resistance, the shutter stage provides just the right amount of feedback without causing you to jostle the phone. Around back you'll find the primary camera -- an eight megapixel affair with an LED flash -- while the front face houses a 1.3MP cam. You've also got a pair of ports on the Focus S, a 3.5mm headphone jack along the top and the all-important micro-USB connector along the bottom.

The 4.3-inch Super AMOLED Plus display here is the same exact panel you'll find on some of its Galaxy S II cousins and it's every bit as gorgeous. The blacks are so deep they seem to absorb all nearby light and matter. And the colors are so vivid the hues can only be described as surreal. Even at its lowest brightness setting the screen is perfectly visible in direct sunlight and, when cranked to the max, not even the most glaring of desert days would be enough to wash this panel out. Sure, you could complain that the screen is only 800 x 480, but with a panel of this caliber you'd just be nitpicking. Metro's beauty shines through despite its shortcomings in the pixel department and we're sure plenty of people would gladly trade a few lines of resolution to avoid the slightly off-kilter colors of a PenTile matrix. Below the screen are the trio of capacitive buttons that are far from the worst we've ever used, but had similar issues with sensitivity as the Flash -- simply brushing your thumb in the general area of the search key was enough to launch Bing and interrupt whatever you were doing.

Update: The Focus S ships with 16GB of non-expandable storage.

Underneath the hood of the Focus S is the same 1.4GHz, single-core Snapdragon and 512MB of RAM found in the Focus Flash and Nokia's Lumia 800 -- so don't expect any performance miracles. That being said, it's not like there's anything wrong with how Mango hums along on those devices. WP7 simply doesn't need the power of dual-core at this stage of the game to stay responsive. When put to the test using WP Bench the Focus S averaged 91.54, putting it right in line with Flash which pulled a 92.15 and well ahead of the Lumia 800 which scored an 86. It couldn't quite keep pace with the extra 100MHz of the Titan though, which hit 96. SunSpider didn't turn up any surprises either. The 6,914ms was, again, just a slightly behind its little brother, the Flash, which finished the benchmark in 6,842ms. That was enough to keep it ahead of the Lumia though, which took took a surprisingly long 7,200ms on the same test.


The 1,650mAh battery isn't quite as beefy as the packs found in some other handsets in the $200 price range, but it managed to survive a full day of pretty heavy usage without batting an eye. We started one morning with the pack charged to the brim and, after 12 hours of texting, emailing, pulling up driving directions and playing a few YouTube clips, we still had 50 percent left. Sticking with a single core might not earn Windows Phones any bragging rights in the performance department, but it helps keep them chugging away throughout the day. Our less-than-scientific testing was right in line with what the WP Bench battery drain test turned up too. The Focus S took a stunning four hours and 24 minutes to kick the bucket, topping the Lumia 800 and Titan by well over an hour, and even besting its little brother by 30 minutes.

The main camera on the Focus S is an 8 megapixel joint with a lone LED performing flash duties. Saying that any phone takes acceptable photos outside in the daylight should be a forgone conclusion at this point, but Sammy's shooter is just a bit above average. Colors are crisp and just saturated enough, while offering plenty of detail with very little noise. Shots indoors with plenty of natural light streaming through the windows were equally good -- we wouldn't blow them up to poster size, but they're more than acceptable as casual snapshots. The camera even took surprisingly good macro pics, though not quite as good as the Droid RAZR. Even at night images were quite crisp with decent color, though there is some noise in the shadows, and the same goes for shots indoors under artificial lighting. We wouldn't hang the shots on a gallery wall, but we were satisfied with their quality. As with its little brother, though, the flash was borderline useless -- washing out anything in the foreground and casting the background into almost complete darkness. What's strange is, this is the same, much-lauded camera found on the Galaxy S II, yet we didn't have this issue with that handset. The same is true of the Lumia 800 and it's practically identical forebearer, the N9, which leads us to believe Microsoft's camera app isn't quite up to snuff.


Video capture was equally impressive. Sure, there was a lot of shaking (image stabilization would be a welcome feature here), but video was crisp and bright. That despite getting the 30-second 720p clip we captured coming in at just 54MB. Perhaps the biggest surprise though, was the audio. Even with a fairly steady flow of cars and a light breeze every word said from behind the camera was clear and perfectly audible.

As much as the camera impressed us, perhaps our favorite feature was the dedicated shutter button. It's a dual-stage key -- a half press engages the autofocus, while depressing it completely snaps a photo. The autofocus is a bit slow and inaccurate (especially under artificial light), but the it's hardly an insurmountable obstacle. The button itself is almost perfect in execution. It puts up just the right amount of resistance, and depresses with a light click. If Samsung put this on every handset (this exact button, not the overly recessed one on the Flash), it might become our favorite handset maker ever.

There's not much new or exciting to say about the Focus S on the software front. It's a Mango device with the same minimally intrusive selection of uninstallable carrier and manufacturer apps we saw on the Focus Flash. Sure, it's a bit annoying the first time you fire up the device to be greeted by pretty healthy number of orange tiles (which stand out quite a bit amongst the default blue) that launch a rather uncompelling selection of AT&T branded apps, but they're easily dismissed. We were happy to see that internet sharing was enabled on the Focus S, though, which allows you to quickly and easily turn the handset into a mobile hotspot for up to five devices. You might want to keep your charger with you if you plan to use the feature for any significant period of time, but it was simple to set up and we had no issues connecting to the handset.

Honestly, we don't have any major complaints about the Samsung Focus S, but there wasn't much that wowed us either. If you're a Windows Phone 7 fan you'll find plenty to like about the device. Mango hums along nicely and the Super AMOLED Plus display, despite its shortcomings in the pixel density department, perfectly highlights the stark beauty of Microsoft's mobile OS. There's also a very good camera with a dedicated dual-stage button and the battery life borders on epic. But, none of that changes the fact that we came away feeling underwhelmed. The build quality is mediocre at best and there just isn't anything distinguishing about the handset that would make us definitively say this is the Windows Phone to get. More than anything, though, our disappointment probably stems from the cost. At $200 on a two-year contract we expect a high-end experience that matches the high-end price and the Focus S simply doesn't deliver that. Making it even tougher to recommend, is the fact that the Titan will be landing on AT&T any day now delivering a better build, faster performance and a larger screen for the same wad of cash. The Focus S isn't a bad phone -- far from it -- but it just doesn't feel worthy of its flagship-like price tag.
In this article: att, focus, focus s, FocusS, mango, microsoft, mobilepostcross, review, samsung, samsung focus s, SamsungFocusS, video, windows phone, windows phone mango, WindowsPhone, WindowsPhoneMango, wp7, wp7.5
All products recommended by Engadget are selected by our editorial team, independent of our parent company. Some of our stories include affiliate links. If you buy something through one of these links, we may earn an affiliate commission.
Share
Tweet
Share