B. Steele
December 14th, 2011
In this article: audio, bluetooth, bluetooth speakers, BluetoothSpeakers, dock, docking station, DockingStation, Harman, jbl, JBL OnBeat, JBL OnBeat Xtreme, JblOnbeat, JblOnbeatXtreme, remote control, RemoteControl, review, speaker dock, SpeakerDock, speakers, wireless speakers, WirelessSpeakers
We've been following the onslaught of AirPlay / Bluetooth speaker systems in recent months, carefully combing through the prospects to find the true contenders. We were recently impressed by Klipsch's Gallery G-17 Air and now we've given the JBL OnBeat Xtreme a testdrive. This beast is step up from the regular ol' OnBeat dock, both in stature and cost. Priced a cool $500... it's sandwiched between the pricey B&W Zeppelin Air and the more modest iHome iW1. So is the JBL dock extreme enough to warrant a purchase? We've been blasting beats through this bad boy for a fortnight, so read on to find out if you should snatch one up for yourself.
%Gallery-141416%
JBL 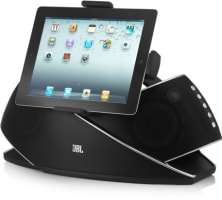 If you're a fan of black gadgets with a sufficient helping of silver accents, the OnBeat Xtreme may be the speaker dock for you. The first thing you'll notice about the kit is JBL's Weave design, which is a nice break from the regular ol' bar shaped portable audio devices, as far as we're concerned. Rather than having a traditional dock nesting station for your iOS device a rotating device connector is flanked by two arms that secure your iPad or iPhone while keeping their orientation in flux should the need arise. This is more useful with the slate than with the handset, but either way, it's a nice touch to be able to charge and rotate if needed. Although, if you're looking to make use of the portrait mode for your Apple tablet, you may have to be a bit selective as to which shelf the dock calls home.

The volume controls were a little tardy in response to our calling for more cowbell.

Moving around to the right of the front side, you'll find a foursome of control buttons. Keeping with the silver motif, these are a backlit polished silver but more matte than the silver panel that covers the top of the dock. Power, volume, source select and Bluetooth phone buttons reside here, giving you all the non-DJ controls you'll need. The backlit controls are a nice touch, and the machined silver materials appear to make the group withstand heavy use. When in dock mode, the source button is lit white, but when you need to opt for a Bluetooth connection, hold that control down and as it turns to blue (well played, JBL), your wireless tunes are good to go. Although at times, the volume controls were a little tardy in response to our calling for more cowbell (read: face-melting output). Heading around to the back panel, you'll find auxiliary input, video out, USB and power connections right in the center of the dock.

Inside the snazzy black and silver exterior, you'll find JBL Ridge tweeters and Atlas Woofers. Four transducers make use of 30 amplification watts each in an effort muster top-notch clarity, whether your cranking Mastodon or The Civil Wars. As with many other offerings, an RF remote is also included complete with playback and menu controls. You know, should you be so completely relaxed that you don't want to hop up off the couch to skip to the next song. Even if you were, you could wirelessly connect your device and keep it right on your lap, but we digress. You can also use the remote to switch between the dock's five EQ modes: music, movies, chat, internet radio or game. By holding down the center button, and carefully reading the flashing source select LED, you can navigate between these but only in the aforementioned order. We actually found the equalizer a bit confusion, as we were never exactly sure which mode we were in.

Let's get right to the heart of the issue: how the thing sounds when cranked up to 11. We're happy to report that the OnBeat Xtreme provides stunning clarity at a low, background noise level and maintains the same quality when cranked up to full-on dance party volume. Said quality also allows you to pick up on more subtle nuances in your album library -- like the crisp snare hits of The Appleseed Cast, for example. We put on Haste the Day's Dreamer and slowly worked our way up to full volume. Even at nearly maximum output levels, the dock performed nicely, giving growling vocals and chugging guitars their rightful place. And, we didn't pick up on any distortion or noise from about six feet away.

Bass lines and beats never became muddy, even across genres.

Being the music aficionados that we are, we were sure to put the OnBeat Xtreme through a grueling genre test. To check out the low end, we blasted Jay-Z's "Hello Brooklyn 2.0." Bass, snare and other elements of the track maintained their individuality and the lyrics stayed clear even at a louder volume. Bass lines and beats never became muddy, even across genres. As recovering musicians, we fancy the ability to discern and enjoy individual elements of each track we listened to made this a worthy contender in the speaker dock realm. Moving down through Anberlin to the Punch Brothers, no matter what musical style we threw at it, the system held up nicely.

Highs are top-notch as well. We hate to dwell on the aforementioned clarity when it comes to the snare drum, but we're suckers for high-level audio output, and that performance continues at the top of the audio spectrum. Vocal quality is worth another mention as well. We never encountered a scenario in which muffled harmonies ruined a perfectly good hook. At the same time, the highs aren't overly brilliant either as the treble level seems to be well engineered.

While we've seen some docks struggle with the mid-range tones, this JBL set of speakers is not one of them. Unlike what we saw with the G-17 Air, musical elements like super technical metal guitars a la A Plea For Purging kept their tone and stood out nicely. Even during the full assault of breakdowns and choruses, guitar parts hold their own. Add this to the duo of crystal clear highs and beefy lows, and you've got yourself a great sounding dock.

Trying to use wireless connectivity with any device, let alone an audio accessory, can sometimes be a hassle. That's not the case here, as connecting via Bluetooth was quick and easy. Once our iOS devices were paired with the OnBeat Xtreme, connecting only took a couple of seconds. Range was about what you'd expect for a device on this connection, as we were able to still control and stream until we walked into the next room. In addition to that, there was no noticeable decay in sound quality either, as we were happy to keep our iPad in our lap while rockin' out.

Because of its Bluetooth and iPhone compatibility, the OnBeat Xtreme allows you to make hands-free calls without having to leave the dock. Equipped with a built-in microphone, the dock will let you order that pizza you're craving without walking over to the coffee table to pick up your phone. Then again, this only worked for us in Bluetooth mode, and not when our iPhone was resting in the dock. The audio quality of our phone calls was much like one would encounter on any speakerphone call. But let's be honest, we're not going to be using a $500 speaker dock to make a ton of calls so this is certainly not a deal breaker by any means.

We prefer the look of the iPod function on both the iPad and iPhone to the company's application.

The first time you nest your iOS device in the dock, the OnBeat Xtreme gives you a gentle nudge to download the JBL OnBeat app from the App Store. To be honest, we prefer the look of the iPod function on both the iPad and iPhone to the company's application. There's not really any added functionality that you can't from the stock software. For all intents and purposes, it's unnecessary and you can get by just fine with what Apple gives you on each device. Although, if you're into hopping back and forth between iOS and the app, your album progress will be held (when paused, of course) until you resume playback on the other software. Bluetooth can be accessed here (and AirPlay were the dock compatible), but you can take care of that connectivity without having to load another app onto your device. Perhaps the directions in the tutorial on how make use of the wireless features is a redeeming element, but that really comes down to whether you'd rather read it on paper or on the screen of your device.
%Gallery-141519%

Engadget's holiday gift guide 2011: docks
JBL intros OnBeat iPad / iPhone / iPod speaker dock, prices it at $150
JBL ships AirPlay-enabled On Air speaker dock
It shouldn't be a surprise that a company like JBL, with a track record for audio products, would put out a solid wireless-enabled speaker dock. Sure, the volume buttons could be a little more sensitive and react to our pressing with haste. And if you're super OCD about fingerprints, you'll probably be constantly wiping the polished silver top of the kit. The JBL app suggestion was a bit of an annoyance that turned out to be a waste of a few minutes once it was explored. All that said, these are hardly deal breakers.

The top-notch sound quality is what would make us consider grabbing one of these for the Engadget HQ. Superb clarity in the audio at every volume we tested kept our ears' perked up throughout our testing. Easy connectivity and the rotating device dock were nice touches as well, we might add, not to mention the break from a blocky speaker dock design made the OnBeat Xtreme easy on the eyes. While you might be able to do better than the OnBeat Xtreme, you could certainly do much worse, and still take a hit to your piggy bank.
All products recommended by Engadget are selected by our editorial team, independent of our parent company. Some of our stories include affiliate links. If you buy something through one of these links, we may earn an affiliate commission.