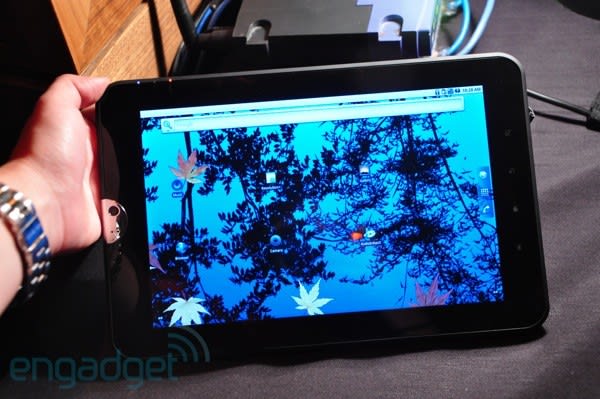 Well, would you look at what we found hanging around Toshiba's CES kick-off party. Okay, so Tosh's still unnamed tablet wasn't running Honeycomb like the final unit will, but Toshiba's loaded Android 2.2 on there to give us a better idea of how it will work when it's finally ready. There's really not much we can say that we didn't already say before -- it's still a very nicely made tablet and we're really digging that rubberized back. As for the screen, the viewing angles were quite wide and Toshiba showed off its Resolution +, which will enhance video or photos on the fly to make them look more HDish. If you're interested in seeing a bit more, hit the break for a short video.

10
In this article: android, android 2.1, Android 2.2, Android2.1, Android2.2, ces, ces 2011, ces2011, Froyo, google honey comb, GoogleHoneyComb, hands-on, honey comb, Honeycomb, tablet, tablets, Toshiba, video
All products recommended by Engadget are selected by our editorial team, independent of our parent company. Some of our stories include affiliate links. If you buy something through one of these links, we may earn an affiliate commission.
Share
Tweet
Share