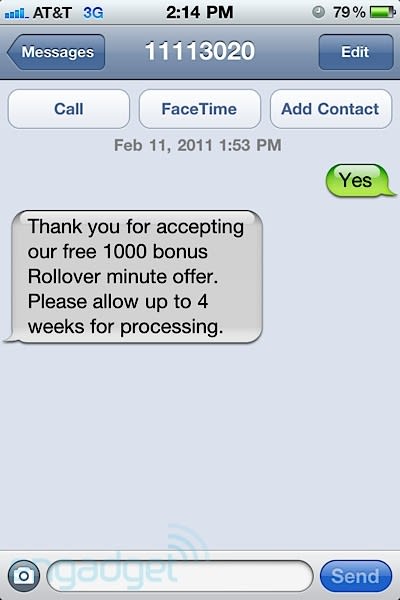 Well, would you look at that. A day after the Verizon iPhone goes on sale to the general public, AT&T is dishing out 1000 free rollover minutes to all of its customers. The catch? None that we know of -- the wireless company apparently just wants to thank all of its awesome customers for, you know, not making the switch to some other carrier with Apple's smartphone. Simply text "yes" to 11113020 to be awarded the talk tokens -- which will probably just pile up on top of the thousands you've undoubtedly already accumulated. Too bad they can't prevent dropped calls.

[Thanks, Danielle]
Via: 9 to 5 Mac
In this article: 1000, 1000 free, 1000Free, apple, att, customer, free, free minutes, FreeMinutes, iphone, roll over, rollover
All products recommended by Engadget are selected by our editorial team, independent of our parent company. Some of our stories include affiliate links. If you buy something through one of these links, we may earn an affiliate commission.