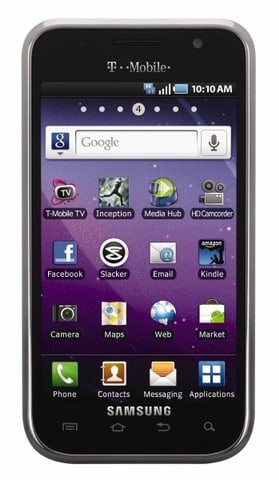 It's only been six months since Samsung launched its highly successful Galaxy S assault upon the US market with a series of carrier customized phones: the Vibrant and Captivate GSM twins for T-Mobile and AT&T, the WiMAX-rocking Epic 4G for Sprint and the Fascinate for Verizon. More derivatives arrived later, with the Mesmerize, Continuum, Nexus S, and LTE-equipped Galaxy Indulge. Still the Vibrant was the first, and the closest in appearance to the original Galaxy S, losing the front-facing camera, but gaining a search button. Unfortunately, Samsung was slow to upgrade early devices like the Vibrant beyond Eclair, and to fix the well-documented AGPS problems. As such, the release of the Samsung Galaxy S 4G for T-Mobile -- basically an updated Vibrant with HSPA+, a front-facing camera, a bronze battery cover, Froyo out of the gate, but no dedicated internal flash storage -- is bittersweet. While beneficial to those who waited, it's a slap in the face to those who purchased the Vibrant. But is it a worthy upgrade? How does it fit into T-Mobile's high-end Android lineup? Read on for our full review after the break. How would you rate the Galaxy S 4G?
We want to hear what you think. Post a quick review now to join the conversation!
Write a review

At a glance, you'd be hard pressed to tell the front of the Galaxy S 4G apart from the Vibrant. The only difference is the return of the front-facing VGA camera also present on the original Galaxy S, Epic 4G, and Nexus S. It features the same gorgeous (dare we say vibrant?) 4-inch WVGA glass capacitive Super AMOLED touchscreen, complete with faux-chrome surround. The T-Mobile logo is in the same top center location, below the earpiece and next to the proximity and light sensors, while the Samsung logo is positioned bottom center, above the standard row of backlit capacitive buttons. And yes, the LEDs behind the capacitive buttons still turn off too soon and still shine too bright. In back, the Galaxy S 4G is almost identical to the Vibrant, with the same metal-rimmed 5 megapixel camera, speaker grill, and Galaxy S logo -- even the signature bump in the battery cover carries over. But instead of being finished in shiny black with a faint silver dot pattern, the back is painted a satin bronze finish that changes color slightly depending on the viewing angle, just like a lenticular print. It's a very polarizing design: while some people really like it, we think it looks cheap and tacky, especially on what is arguably T-Mobile's flagship phone. Everything remains the same around the edge of the device, with a standard 3.5 mm headphone jack and microUSB connector (behind a clever sliding door) on top, a battery cover removal slit and microphone on the bottom, a lanyard hole and volume rocker on the left, and the power / lock key on the right. The Galaxy S 4G feels just as light as the Vibrant, and no less plasticky, which is a shame.

Spec-wise the Galaxy S 4G further mirrors the Vibrant, but cranks things up a notch with the addition of HSPA+ for network speeds up to 21Mbps (what T-Mobile calls "4G"). Inside you'll find the same 1GHz Hummingbird CPU with PowerVR SGX 540 graphics, 512MB RAM, WiFi b / g / n, Bluetooh 3.0, AGPS, a compass, a gyroscope / accelerometer, and a light sensor. Despite being already six months old, this combination of hardware still delivers solid performance, especially when paired with Android 2.2. In addition to the aforementioned HSPA+ radio (with AWS / 1700MHz and 2100MHz support), there's also a legacy quadband radio for EDGE duty. Lifting the battery cover reveals a microSD card slot along with the obligatory SIM slot. A 16GB card is supplied along with an SD adapter -- it contains the movie Inception as a DRM encrypted file. Strangely, the 16GB of internal flash storage present in the Vibrant is gone from the Galaxy S 4G, leaving the microSD card slot as the sole option for storing media and other content. In our tests, calls sounded clear and reception was equally good. Battery life, however, was only average, with the 1650mAh battery lasting about 24 hours on a charge with moderate use (taking pictures, listening to music, surfing the web, and messaging). While this is in line with most other high-end Android phones, we think there's room for improvement.

So does HSPA+ really make much of a difference? We compared the Galaxy S 4G to our HSPA-only Nexus S on T-Mobile by using the speedtest.net app in various San Francisco locales (within the carrier's HSPA+ footprint) and most of the time the results were similar on both devices. Of course the topography of San Francisco is notoriously hard on signal quality, and we expect the performance gap between HSPA and HSPA+ to widen over time as T-Mobile tweaks its network, but for now HSPA+ does not appear to offer significant speed gains. Your mileage may vary.

Samsung knows how to make a nice cameraphone, and the Galaxy S 4G is no exception. It shares its 5 megapixel sensor and autofocus optics with the Vibrant, and takes excellent pictures. In fact, the results are better than most other 5 megapixel cameraphones. This is a camera with few equals amongst Android devices. It gathers a ton of information, with accurate color balance and exposure. There's no flash, but low light performance is top notch. Noise is kept well under control, and loss of detail is minimal. The Galaxy S 4G does a decent job of recording 720p video at a smooth 30 fps. While there's no autofocus before or during video capture, Samsung wisely chose AAC (instead of the default AMR) to encode audio, resulting in better sound quality. User experience can make or break a cameraphone. Thankfully, the camera interface on the Galaxy S 4G is one of the best we've seen on Android, no doubt thanks to the company's experience making dedicated point-and-shoot cameras. It's reasonably intuitive, and all the important controls are easily accessible, with less common settings nestled within menus. There's no dedicated two-stage shutter key, but you'll find touch-to-focus, smile / blink detection, and a panorama mode, amongst other features. Overall, we're very impressed with the camera on the Galaxy S 4G. It strikes a good balance between image quality and usability, without making too many compromises.

Let's put things in perspective. The Vibrant shipped with Android 2.1 (Eclair) mid-July and just received its Android 2.2 (Froyo) update in January. Android 2.3 (Gingerbread) was launched mid-December with the Nexus S. The Galaxy S 4G is running Android 2.2, and while Froyo still offers great performance and useful features such as built-in WiFi hotspot functionality, it's somewhat disappointing to see a flagship phone arrive on the market one full OS version behind the state-of-the-art. Of course, this is the price we all pay for manufacturers and carriers customizing Android in a flawed attempt to differentiate themselves. Thankfully, the TouchWiz 3.0 UI used by Samsung on the Vibrant carries over to the Galaxy S 4G mostly unchanged. It remains lightweight and relatively unobtrusive, unlike Motorola's Blur. We're still not sold on the ultra-saturated cartoon-like color scheme (made stronger by the high-contrast Super AMOLED display), but Froyo on the Galaxy S 4G certainly feels snappier than Eclair did on the Vibrant. Quadrant scores routinely hover around the 1000 mark, and while it's no speed demon, the Galaxy S 4G consistently delivers the level of performance we've come to expect from a high-end device. As a point of reference, our Nexus S with Gingerbread easily reaches 1500+ on the Quadrant benchmark. TouchWiz 3.0 provides some nice, well... touches, like a task manager, a file browser, a much improved music player, and a row of toggles in the notification area for WiFi, Bluetooth, GPS, silent mode, and auto-rotation. The sideways-scrolling app tray is a bit disorienting at first, but is easy to adjust to.

There's a number of pre-installed apps from Samsung and T-Mobile on the Galaxy S 4G, such as Amazon MP3, doubleTwist with AirSync, Facebook (but not Twitter), Kindle, Layar, Media Hub, Qik Video Chat, Slacker, T-Mobile TV, TeleNav, and ThinkFree office. Like with the Optimus T, T-Mobile bundles the Swype keyboard, WiFi calling (aka UMA), and visual voicemail with the phone, along with DriveSmart, an app that minimizes driving distractions by silencing notifications, routing calls to voicemail or a Bluetooth headset, and optionally auto-responding to calls and texts. We were particularly excited to see doubleTwist with AirSync pre-loaded on the Galaxy S 4G, but we're no sure why TeleNav is included considering Android provides awesome free built-in navigation. T-Mobile TV dishes out live and on-demand TV programming. Pricing varies with the content and is billed directly to your T-Mobile account. While there's a 30-day free trial, we're not quite sure that paying to watch television on a 4-inch screen is a particularly attractive proposition, but we're not really the target market for this. To make matters even more confusing, Media Hub also allows you to rent or purchase video content and charge it to your T-Mobile account. There's definitely something to be said about Apple's unified iTunes Store approach here. As mentioned above, The movie Inception lives on the supplied microSD card and comes with its own shortcut. Just be aware that formatting the microSD card will delete the film. The rest of the Galaxy S 4G software is all standard issue Android. Sadly there's no photo or video editor available like on some other Samsung devices.

A few apps take advantage of the front facing camera right out of the box, like the camera and video recorder, as well as Qik Video Chat, a T-Mobile branded version of the popular video streaming service. We also installed Tango on the Galaxy S 4G and made several video calls over T-Mobile's network to an iPhone 4 on AT&T. Image quality is pretty much what you'd expect from a VGA camera -- acceptable in normal light and grainy in the dark -- but it gets the job done.

It's an exciting time to be a T-Mobile customer. There's never been a better selection of high-end AWS-compatible Android devices before. The Galaxy S 4G, Nexus S, myTouch 4G, and G2 each bring a unique flavor of Android to the table. We think "pure" Android 2.3 trumps HSPA+, so the Nexus S is our first choice. But if you absolutely require HSPA+, we highly recommend the Galaxy S 4G. It beats the myTouch 4G with a larger, higher quality display, a less pervasive skin, and a lower price (after mail-in rebate). It also improves upon the Vibrant with HSPA+ and a front-facing camera, at the expense of that 16GB of internal flash storage. Cosmetically, we prefer the Vibrant to the Galaxy S 4G, but that's a matter of taste. If you already have a Vibrant, we suggest you wait until something more compelling comes along, unless HSPA+ and the front-facing camera really matter to you. We enjoyed our time with the Galaxy S 4G. It's a feature rich Android phone with a slightly customized UI that packs an impressive camera and delivers solid performance across the board. Battery life could be better, and it could be a little cheaper ($200 with a two-year contract, after $50 mail-in rebate). Let's just hope Samsung drops that Gingerbread update in less than six months this time around.
In this article: 4G, 5 megapixel, 5Megapixel, 720p, AirSync, Android, Android 2.2, Android2.2, AWS, DriveSmart, front facing camera, FrontFacingCamera, Froyo, Galaxy S, Galaxy S 4G, GalaxyS, GalaxyS4g, Google, HSPA+, Media Hub, MediaHub, Qik, review, Samsung, Samsung Galaxy S, Samsung Galaxy S 4G, SamsungGalaxyS, SamsungGalaxyS4g, T-Mobile, T-Mobile TV, T-mobileTv, TouchWiz, vibrant, Vibrant 4G, Vibrant4g, video
All products recommended by Engadget are selected by our editorial team, independent of our parent company. Some of our stories include affiliate links. If you buy something through one of these links, we may earn an affiliate commission.
Share
Tweet
Share