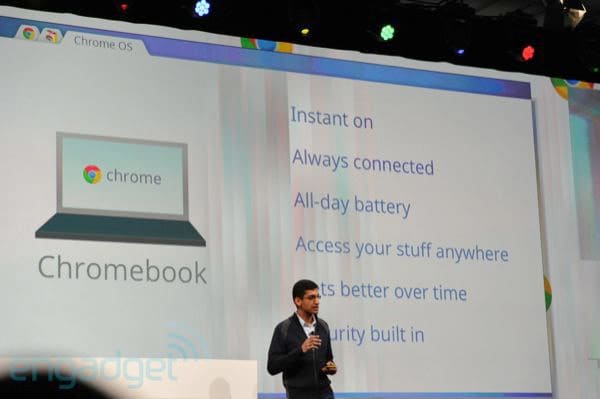 Google's second (and final) day of I/O 2011 was all about Chrome, and unfortunately for those yearning for a Chrome OS tablet, it looks as if your dreams will remain unfulfilled. Sundar Pichai, Senior VP of Chrome, spoke candidly about the company's intentions during an executive Q&A session follow this morning's keynote, and he didn't bother to mince words:

"[Chrome OS] is a new experience we're working on. It's hardware agnostic in a sense. We are fully, 100 percent focused on laptops. Most of the web usage -- greater than 90 percent -- is on laptops. That's what we're working on today, and we have no other plans on any other form factors."

Any other form factors outside of the Chromebox, we're surmising. Goog's been pretty steadfast in its approach to Chrome OS; it's being marketed as a software + hardware package, with both working in lockstep to provide a (more or less) guaranteed user experience. To that end, the outfit's obviously not interested in cannibalizing any Android slate sales with the addition of Chrome OS, and while we're bummed in a way, the promise of Ice Cream Sandwich helps to numb the pain (a little). In related news, Sundar also addressed questions regarding the company's decision to rely on both Chrome OS and Android. When asked to "reconcile [Google's] two big strategic visions," he hit us with the following:

"There are a variety of experiences out there, and the web model is very different. We're comfortable seeing them coexist. Google Movies and YouTube have web versions -- when you use a Chromebook, you see how it's different, and they'll naturally coexist. These are very different models -- if we didn't do something like Chromebooks, I'm pretty sure someone else would."

That last line is most telling, and it begs the question: if not Google, then who? There's no question that companies are crowding the cloud bandwagon, but would Microsoft or Apple really have the desire to bust out a totally connected operating system? Makes you wonder if Chrome OS won a race that never actually began...
In this article: chrome, chrome os, ChromeOs, google, google chrome os, google io, google io 2011, GoogleChromeOs, GoogleIo, GoogleIo2011, laptop, netbook, notebook, operating system, OperatingSystem, OS, slate, software, tablet, tablet pc, TabletPc
All products recommended by Engadget are selected by our editorial team, independent of our parent company. Some of our stories include affiliate links. If you buy something through one of these links, we may earn an affiliate commission.