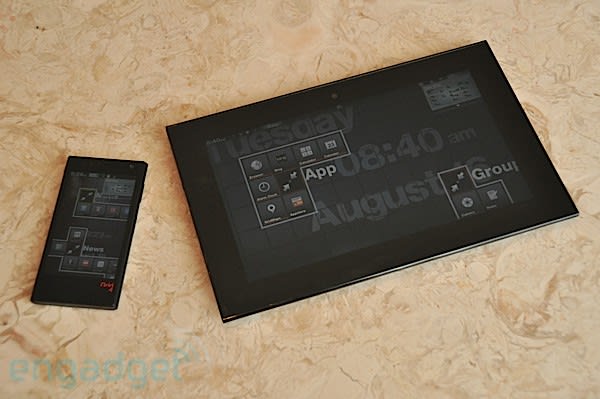 Yesterday we gave you the lowdown on Fusion Garage's second foray into tablet computing, the Grid 10. While its tablet world topping pixel density, Tegra 2 silicon, and fresh to death OS certainly sound awesome, we had to get our grubby mitts on one to see if it's as good as its spec sheet would have us believe. So, is the JooJoo's successor a superior slate, or is it destined to disappoint like its elder sibling? Read on past the break to find out.

Similar to its much maligned predecessor, the Grid 10 had a svelte profile (though it's not as thin as the Galaxy Tab 10.1) and is relatively lightweight. It's pixel packed display is, of course, quite the fingerprint magnet, but the tablet's backside is coated in a matte finish with a chromed logo in the middle. It doesn't quite have the high end look of the JooJoo, but the Grid 10 is a handsome slate, nonetheless. On one side there's a 3.5mm headphone jack, microSD card slot, and proprietary 40-pin connector, while the power button and a Micro SIM slot (behind a swiveling door) reside on the other. The Grid 4 phone is adorned with even less accoutrement -- there's just the power button, a micro-USB port, volume rocker, and a Micro SIM socket.

While the hardware is nice, it's the Android-based Grid OS that really sets this duo of devices apart. This brand-new OS is based on the Android kernel, but Fusion Garage did the rest. In our chat with company CEO Chandra Rathakrishnan, he explained that just as OSX was built from UNIX, Grid OS was built from Android code. The OS also has Dalvik virtual machine built in, so all of your favorite Android apps will work on the Grid 10 and Grid 4, but there's no access to the Android Market and it doesn't come with Android's normal bunch of Google goodies -- you'll have to go to Amazon or elsewhere for applications. A company app store, called Gridshop, will also provide custom applications when it launches "sometime this fall."

Upon booting up the Grid 10, we were greeted with an unlock mechanism that requires users to literally sign in -- as opposed to dragging an icon or a switch across the screen -- using a custom character or two drawn with your fingertip. Once inside, there is a massive (surprise, surprise) grid home screen, as opposed to the multiple screens that you swipe through in stock Android. Apps get their own square on the grid and can be left by themselves or grouped together by placing them in adjacent slots. Once you've formed and named your group, a hub button populates that lets you minimize the individual apps or expand them at your leisure. There's also a mini map in the top right corner that allows you to navigate directly to parts of the home screen not currently displayed. A simple swipe to or tap on the desired area gets you where you want to go. It's definitely a different experience from using Honeycomb or iOS, and one we found it intuitive and easy to use -- but perhaps that's due to its similarity to the licensing system in Final Fantasy XII (with which we are quite familiar). The feel of Grid OS is new, but we think the look is inspired a bit by Windows Phone 7 -- there are clean, simple fonts and features in a UI dominated by squares.

Getting into apps takes a simple tap of your finger, while getting back to the home screen requires a two-fingered swipe downward from the top bezel, and a similar dual-digit inward swipe from the right side serves as a back command. During our brief time with the device, we got to see the calendar, web browser, music and video, and the notification dashboard apps. In the calendar, there's a smart window that provides relevant information regarding your appointments for that day, whether it's a map to the location of a meeting or restaurant recommendations for a lunch date. This is one feature that illustrates the "predictive intelligence" baked into the core OS.

Predictive behavior is present in all of the Grid applications, and provides relevant notifications and information based upon your location, the time of day, and your usage habits. For example, in the web browser, a search for "Inception" provided one pane of Bing results and another with the links to online stores to purchase the movies, the option to open the IMDB app, a link to the Inception Wikipedia page, directions to the movie theater, and dictionary results, among others. This predictive engine is also present in a nifty bit of code called "The Wheel," a protractor-shaped widget that pops up when you highlight a bit of text. The Wheel provides related apps and search recommendations in a UI reminiscent of the now-defunct First Else phone OS. Lastly, the predictive intelligence also monitors the apps you download from other sources and makes suggestions for similar offerings from Fusion Garage's Gridshop.

The music and video apps pull content from your Mac or PC (including iTunes!) once you've loaded up the Grid Desktop software. The video app also has the ability to pause a video on one Grid gadget and continue watching it another (or your computer with Grid Desktop installed), not unlike U-Verse. This bit of black magic comes courtesy of a cloud service that syncs all your Grid-enabled devices. The Grid 10 will also come with Grid Frames, a productivity suite similar to what you'll find on the iPad, and a platform-agnostic video calling program that promises to let you see and chat with multiple friends simultaneously. The video calling isn't quite ready for prime time, but we were told that it'll be sent out through an OTA update later this year.

At $500, Fusion Garage's new tablet certainly isn't cheap, and time will tell if its predictive intelligence turns out to be a blessing or a burden -- if it can actually provide relevant information and recommendations, it could be quite the killer feature. We're certainly intrigued by the Grid 10's potential, particularly the ability to pause content on one device and pick it up on another. Is this fresh take on tablets enough to make the big boys in Mountain View and Cupertino worried? Probably not, but regardless the Grid 10 offers a unique user experience and an option for folks not interested in jumping on the Android or iOS bandwagon, and we think that is a decidedly good thing.
In this article: android, chandra rathakrishnan, ChandraRathakrishnan, fusion garage, FusionGarage, grid 10, grid operating system, grid os, Grid10, GridOperatingSystem, GridOs, hands on, hands-on, HandsOn, joojoo, slate, tabco, tablet, video
All products recommended by Engadget are selected by our editorial team, independent of our parent company. Some of our stories include affiliate links. If you buy something through one of these links, we may earn an affiliate commission.