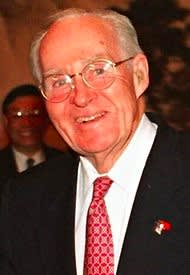 We're very sorry to report that Robert W. Galvin, former chairman and CEO of Motorola, died this week in Chicago at the age of 89. Over the course of his nearly three-decade tenure at the helm, Galvin oversaw Motorola's transformation from a mid-level radio and walkie talkie manufacturer into one of the world's leading electronics makers. In the process, he cemented his legacy as one of the industry's most forward-looking executives. The Marshfield, Wisconsin native first joined the company as a stockroom apprentice in 1940, and would go on to spend his entire career there (save for a tour of duty in World War II). He was named chairman and chief executive in 1959, following the death of his father and company founder Paul Galvin. Under the younger Galvin's stewardship, Motorola expanded the depth and breadth of its operations, moving into emerging markets and focusing much of its efforts on the burgeoning cellular industry. Galvin spearheaded this transition, which saw Motorola introduce the first commercial cellphone in 1973, and the first cellphone network in the early 1980s. When he first took control, Motorola's annual sales stood at around $290 million. By the time he retired as chairman in 1990, however, that figure had ballooned to $10.8 billion. Galvin went on to serve on the company's board of directors until 2001 and, though he may have departed, his impact certainly won't be forgotten anytime soon. "We will continue to honor Bob Galvin's legacy here at Motorola Mobility," said current chairman and CEO Sanjay Jha. "He was committed to innovation, and was responsible for guiding Motorola through the creation of the global cellular telephone industry." Robert "Bob" Galvin is survived by his wife of 67 years, four children, 13 grandchildren and ten great-grandchildren.

"We are greatly saddened by the loss of Bob Galvin. During his 29-year tenure at Motorola Inc., Bob oversaw remarkable growth and transformed Motorola into a global leader in technology, with $10.8 billion in sales in 1990, the year he stepped down as chairman. Bob was a visionary within the technology sector, leading the creation of the global cellular telephone industry from the introduction of the first portable cell phone prototype, the DynaTAC, to the first pocket-sized 'flip phone', the StarTAC, in 1996.

Bob's commitment to innovation has remained a core value at Motorola Mobility and his contributions have left a lasting mark on both the Motorola Mobility portfolio and the entire cell phone industry. Today we honor Bob's many accomplishments and celebrate the technology he was so instrumental in building."

Comment from Sanjay Jha, chairman and CEO, Motorola Mobility, " On October 11, we lost a transformative leader and visionary. We will continue to honor Bob Galvin's legacy here at Motorola Mobility. He was committed to innovation, and was responsible for guiding Motorola through the creation of the global cellular telephone industry. We extend our deepest sympathies to his family."
Source: The New York Times
In this article: bob galvin, BobGalvin, business, cellphone, CEO, chairman, death, entrepreneur, executive, industry, mobilepostcross, motorola, motorola mobility, MotorolaMobility, network, obit, obituary, robert galvin, RobertGalvin
All products recommended by Engadget are selected by our editorial team, independent of our parent company. Some of our stories include affiliate links. If you buy something through one of these links, we may earn an affiliate commission.