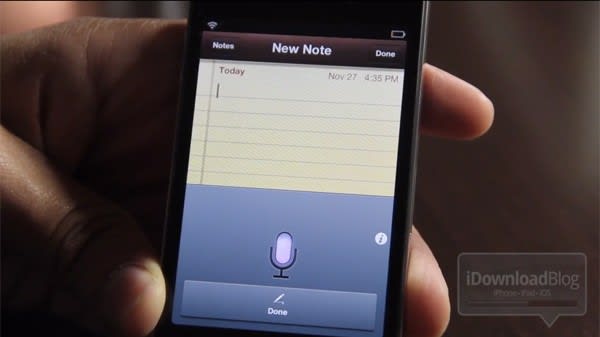 Sure, it's leaps and bounds away from all the parlor tricks that Siri is able to perform, but now, jailbroken iPhone 4, iPhone 3GS and iPod Touch devices -- that have been upgraded to iOS 5 -- may access the dictation portion of Siri's prowess. Thanks to Siri0us, the free app available through Cydia, users will gain the option to speak messages and search queries rather than type them, which could be a huge time saver -- unless there's a series of mistakes, anyway. Rather than accessing Apple's own system, the app works by tapping into Nuance's Dragon Go servers for speech recognition. Rather subversive, don't you think? If you'd like to get in on the fun (before Nuance breaks up the party), just check the video following the break.

Update: Well, who didn't see this one coming? Nuance has pulled the rug out from under Siri0us, and the app has been yanked from Cydia while the developer searches for another speech recognition server. Happy hunting, dude.
Via: The Verge, 9to5 Mac
Source: iF0rce, iDownloadBlog, (2)
In this article: app, apple, apps, cydia, dictation, dragon go, DragonGo, if0rce, ios, ios 5, Ios5, iphone, iphone 3gs, iphone 4, Iphone3gs, Iphone4, ipod, ipod touch, IpodTouch, jailbreak, jailbreaking, jailbroken, mobilepostcross, nuance, siri, siri0us, speech recognition, SpeechRecognition, video, voice recognition, VoiceRecognition
All products recommended by Engadget are selected by our editorial team, independent of our parent company. Some of our stories include affiliate links. If you buy something through one of these links, we may earn an affiliate commission.
Share
Tweet
Share