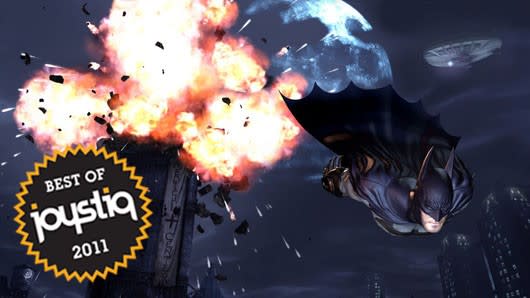 This might sound familiar. In 2009, Joystiq awarded Batman: Arkham Asylum its number three spot in that year's top ten list of games and here we are, two years later, giving that game's sequel the same honor. But it's not the same honor.

Referencing the failure to launch of Pandemic's open-world Dark Knight movie tie-in game, I identified Rocksteady's success as one primarily of scale: "Instead of building an open-world Gotham City, they built an intimate (and immediately captivating) Arkham Asylum, as full of history and lore as you'd expect the comic book icon to be." Of course, Batman: Arkham City is an open-world game.

So, how did developer Rocksteady do what Pandemic couldn't? Arkham City avoids the pit that most open-world games fall into, opting for a dense environment instead of a spartan one whose acreage is appropriate only for a back-of-the-box bullet point. Like in Asylum, there are no Batmobiles or Batwings to help you navigate the environment; instead, Rocksteady had to revisit Batman's existing locomotion which excelled in Asylum but was never given the opportunity to shine. Coupled with Arkham City's verticality, Batman now grapples, launches, dives, swoops, and generally flies all over. Moving from one end of the map to the other doesn't get old and never takes more than a few minutes. For an open-world game, that's priority number one and Arkham City takes its place in an elite pantheon perhaps best typified by the Assassin's Creed series.

While locomotion is important, what you do when you get to your destination is equally important. Arkham City brings back Arkham Asylum's best-in-breed melee combat system but ups the fluidity. It's not unusual to take on a mob of 20 thugs, seamlessly stringing together combos well into the double digits. Layer in an arsenal of wonderful toys, each of which can be quick-activated in combat, and environment-specific takedowns, and the best melee system in gaming returns with more new tricks than you may have thought possible.

Does Arkham City provide the same surprise that its predecessor did? Of course not. If your definition of success begins and ends with "new" then you're likely to be disappointed here. But if you're open to the idea of a sequel that takes the task of enhancement seriously, you'll find no more ambitious product than Batman: Arkham City. With it, Rocksteady has proven that it's no one-trick pony and has once again changed the world's expectation of what a licensed game can be. No pressure.

Joystiq is revealing its 10 favorite games of 2011 throughout the week. Keep reading for more top selections and every writer's personal, impassioned picks in Best of the Rest roundups. The list so far:
In this article: Batman-Arkham-Asylum-2, Batman-Arkham-City, joystiq-best-of-2011, microsoft, pc, playstation, ps3, Rocksteady-Studios, WBIE, xbox
All products recommended by Engadget are selected by our editorial team, independent of our parent company. Some of our stories include affiliate links. If you buy something through one of these links, we may earn an affiliate commission.
Share
Tweet
Share