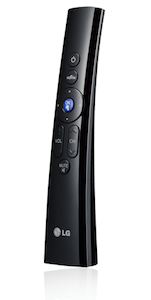 LG whipped out the magic wand at CES this morning, with the announcement of an enhanced Magic Remote. With this new tool, users will be able to control their Cinema 3D Smart TVs with an expanded set of functions, including voice recognition, a "wheel" function, "magic" gestures and pointing. Expanding beyond the realm of simple push-button functionality, the Magic Remote's voice recognition capabilities allow viewers to enter text and other commands without even lifting a finger, while its wheel, perched at the center of the device, allows them to seamlessly scroll up and down their TVs as they would on a PC. Alternatively, users could simply point the Remote at their displays to move their onscreen cursors around the screen, or input gesture commands to control their Smart TVs with their arms or wrists. The device also features a dedicated button that allows users to instantly convert 2D to 3D, and can be used to control set-top boxes, as well. No word yet on pricing or availability, but you can head past the break for more details in the full PR.
Show full PR text
LG'S NEW MAGIC REMOTE ADDS INNOVATIVE FUNCTIONS TO ENHANCE THE CINEMA 3D SMART TV EXPERIENCE

"LG has been striving to constantly improve the comfort and convenience with which our customers use the CINEMA 3D Smart TVs," said Alessi. "The new Magic Remote is our latest example, incorporating new functions that will make it easier for users to use the CINEMA 3D Smart TVs, particularly our Smart TV function which globally now has over 1,200 apps and a growing abundance of premium content."

The Magic Remote's most obvious difference with conventional remote controls is that push-buttons constitute merely one dimension of the intuitive user experience, Alessi explained. In addition to having traditional push-button capabilities, some versions of the Magic Remote include voice recognition technology, allowing users to enter text – such as search terms – with voice commands, speeding up the overall Smart TV browsing experience.

The "Wheel" feature located at the center of the Magic Remote enables users to swiftly scroll up and down Web pages and various menus and applications – just like a PC, allowing users to view content quicker and more efficiently. The "Pointing" function allows users to simply point the Magic Remote toward the TV screen and drag the on-screen cursor to make selections. Through Pointing, users can also navigate through LG's Smart TV ecosystem without having to use multiple buttons and arrow keys. Additionally, physical Magic Gestures can be inputted as commands, enabling users to control CINEMA 3D Smart TVs with simple arm or wrist movements. LG also offers a three-mode remote that does not include voice recognition.

In addition to the four mode functions, the Magic Remote also offers a 3D button, which operates LG's updated and enhanced 2D to 3D conversion with a single click. With its arched ergonomic design, the new Magic Remote is easier to grip and hold onto, allowing for a more comfortable CINEMA 3D Smart TV experience.

While controlling LG's new CINEMA 3D Smart TVs, the LG Magic Remote also can control cable and satellite set-top boxes. Unlike conventional "universal" remotes, this useful functionality utilizes advanced technology in the Smart TV for auto-sensing of changed sources when the viewer switches between set-top boxes, Blu-ray Disc players and other HDMI-connected devices.
In this article: ces, ces 2012, Ces2012, Cinema 3D, cinema 3d smart tv, Cinema3d, Cinema3dSmartTv, control, display, gesture, hdpostcross, LG Magic Remote, lgces2012, LgMagicRemote, peripheral, smart tv, SmartTv, television, TV, voice recognition, VoiceRecognition
All products recommended by Engadget are selected by our editorial team, independent of our parent company. Some of our stories include affiliate links. If you buy something through one of these links, we may earn an affiliate commission.
Share
Tweet
Share