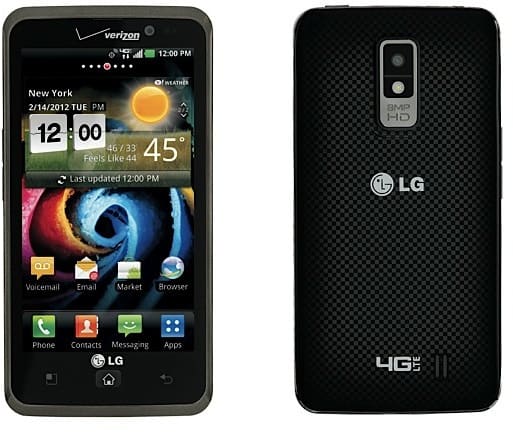 Let's just get this out of the way, shall we? If the LG Spectrum looks familiar, you're not imagining things. It may have been a highlight at the company's CES press event last month, but the handset bears more than a passing resemblance to its older, more excitingly-named sibling, the LG Nitro HD -- and, by extension, the globe-trotting Optimus LTE. Beneath their 4.5-inch IPS displays, you'll find virtually identical guts, including a 1.5GHz dual-core processor, 1,830mAh battery and 4GB of internal storage, coupled with a 16GB microSD. There are some important distinctions here, of course -- namely, changes to the phone's shell and, of course, a shift from AT&T to Verizon. So, how does world-weary Optimus fare from its jump to Big Red? Find the answer past the break. The LG Spectrum offers LTE, fine performance and a great screen, but the short battery life makes it a tough sell.

How would you rate the Spectrum?
We want to hear what you think. Post a quick review now to join the conversation!
Write a review

Like the Nitro before it, the centerpiece here is that lovely 4.5-inch IPS fingerprint magnet. The Spectrum is a smidgen more flat on the top and bottom, giving the handset a fairly classic, slab-like appearance. Above the display sits a big Verizon logo, just to the left of the front-facing 1.3 megapixel camera. Right above that is a discreet speaker grill -- far less pronounced than the Nitro's. Along the bottom bezel, you'll find a row of haptic touch controls, including menu, home and back. The menu button in particular is a big, silver affair, embedded beneath a coat of gloss, adding a little spice to an otherwise boring front. The handset also has a silver band around its border, adding a little splash of color and a few millimeters to its height.

LG has sapped the Optimus and Nitro HD of what little aesthetic charm they had.

Along the left-side of the handset, you'll find a volume rocker -- two of three physical buttons on the phone. In spite of the fair amount of real estate afforded by the large screen, LG opted not to go overboard on the front by adding, say, a camera key. Instead, the entire left side of the phone is barren, completely devoid of buttons or ports. There's nothing on the bottom, either, which only sports a microphone hole, along with a small slit for prying the back off the phone. Things are a fair bit more crowded along the top, however, where the headphone jack, power / lock button, secondary mic and MHL port live, the latter of which hides behind a flimsy door you'll have to scrape away with your fingernail.

The biggest aesthetic difference between the two handsets can be found on the rear of the device, where the Nitro's textured backing has been swapped out for a glossy checkerboard cover, which, like the front surface, serves as one handy repository for fingerprint grease. Ultimately, we've got to give this round to the Nitro: the textured rear helps save the phone from potential slippage and generally looks better the smudge-tastic Spectrum. The phone feels good in hand, but the omission of any sort of textured backing feels like a forced attempt at differentiating the Spectrum from its identical cousin. The plasticky back also lends the handset a generally cheaper feel than its contemporaries. The 8MP camera module sits toward the top, with the Nitro's brushed metal accent replaced by something shinier. The metal logo has also been replaced by a less exciting painted one. Along the bottom of the back side, you'll see a 4G LTE logo, along with two slits for the speaker.

Again, the display's a marquee feature, and it's a doozy. What we have here is a Gorilla Glass-encased 16:9 IPS panel. As with the Nitro HD, the Spectrum packs an impressive 329ppi into its 1280 x 720 display. The colors really pop, even with the relatively staid scheme of the new Sherlock Holmes trailer, which comes pre-loaded on the device. You'll also get some great viewing angles out of the handset -- though the ultra-glossy screen will undermine the visibility considerably if there happens to be a light source overhead.

All in All, LG has really sapped the Optimus / Nitro of what little aesthetic charm it had, resulting in a dull, cheap-feeling slab of a phone. Sure it's quite reasonably priced at $199 (plus a two-year contract, natch), but for that kind of money you can also become the proud owner of the Droid RAZR or HTC Rezound, both of which are far more arresting.

Given the similarity between the two phones' internals, we're probably not going to pop off any monocles when we say the Spectrum and the Nitro HD fared comparably across our benchmarks. On an initial run, the handset notched lower scores, but a software upgrade noticeably boosted them. Even after the upgrade, the handset generally scored a bit lower than the Nitro HD, but for what it's worth, that gap was modest, at best.


These numbers also compare reasonably well against what we observed from the HTC Rezound, another $199 offering on Verizon (it cost $100 more when it first launched, a few months ago). LG's phone ekes out the Beats-packing handset in most departments, including Nenamark 1, Linpack multi, Quadrant and SunSpider. The Rezound does best the Spectrum in the Linpack single and Neocore departments, while Nenamark 2 is a wash.

The phone performed decently with standard use, too, though the Qualcomm MSM8660 1.5GHz dual-core processor-powered phone did experience some hiccups, including a lag coming out of the camera program, for example. On the whole, though, the phone performs most standards tasks, such as web browsing and finding addresses via Google Maps about as well as you could hope.

Things are a bit less rosy on the on the endurance front. In our standard battery life test, the handset eked out around four and a half hours. In the real world, we managed to get around seven and a half hours of use -- enough to get you through the better part of a day. If you need more stamina, you'll want to scroll through the settings and disable the LTE -- unless, of course, you're near an outlet. It's either battery life or speed here. You can't have it both ways.

The Spectrum gets some respectable -- though not extraordinary -- data speeds, courtesy of Verizon's LTE network, the one whose logo is so proudly emblazoned across the device's back. Unsurprisingly, data rates around New York City varied a good deal, based on location and time of day, with max download speeds of 30.32 Mbps and uploads of 18.68 Mbps. Mid-day in midtown Manhattan, things slowed to a crawl, however. All told, our average results came to 14 Mbps down and 11.2 Mbps up -- not bad, but far from exemplary.

The Spectrum's flash-packing eight megapixel camera performed admirably, even in the relatively dim, overcast days we've been experiencing here on the east coast, capturing fine detail and handling contrast well. Naturally, the quality degraded in darker settings, and when the handset's zooming capabilities were pushed to their limits. The camera software is the same as on the Nitro HD, which is to say, it allows you to shuffle between portrait, landscape, sports, sunset and night modes. If you're feeling fancy, you can fiddle with the white balance, ISO and color settings, or snap a panorama shot. You can also enable location-tagging if you're so inclined.


The phone's 1080p video capture performed fairly well, recording the chaos of a busy city scene with a fair amount of detai. It also did an admirable job pulling in the cacophonous sounds from all angles. Unlike in still mode, though, autofocus is conspicuously absent during the recording process.

Good news for those who fear change: we're still looking at Gingerbread here. LG has promised an upgrade to Ice Cream Sandwich "soon," so you've got something to look forward to on that front, provided you can stay patient. In the meantime, you're gonna to be dealing with a slightly dated mobile OS -- albeit, one masked by LG's stock skin. As with the Nitro HD, there's not a whole lot of fancy 3D animation going on in the menus here, which helps things move along quite snappily. In fact, the default layouts are quite similar on the two phones, with big weather and and social networking widgets popping up, as you scroll from screen to screen.

The Spectrum swaps AT&T's carrier-centric page for one that features quick links to the phone's multimedia offerings. The handset ships with 16 apps that full under the Verizon heading, including VZ Navigator, V Cast Media Manager, Verizon Video and some third-party ones like Rhapsody and Blockbuster. Unlike the Nitro, there's no active CarrierIQ to tangle with here. Tapping and holding a finger down on the desktop launches a grid that lets you adjust widgets, shortcuts, folders and wallpaper. Zoom in from there, and you can swap the order of home screens, or just delete them altogether, if you're sick of all of those social networking widgets.

LG Nitro HD review
LG Optimus LTE now official
HTC Rezound review
When the Optimus LTE made the jump to Verizon, it shed a lot of aesthetic charm in the process. What it lacks in looks, however, the phone makes up for somewhat with its stunning 4.5-inch display. The handset also sports a capable shooter and good transfer speeds, in part thanks to Verizon's 4G network. LTE is no longer a huge novelty, though -- and if you've resigned yourself to spending $199 on a phone with a two-year contract, you could arguably do better with the Droid RAZR or HTC Rezound. Battery life continues to be a concern for LTE handsets of all stripes, and the Spectrum certainly doesn't do anything to change that. All of this adds up to a fairly uninspiring choice for Verizon customers, who currently have no shortage of quality handsets to choose from.

In this article: 4g lte, 4gLte, android, android 2.3, Android2.3, gingerbread, lg, lg spectrum, LgSpectrum, lte, mobilepostcross, review, spectrum, verizon, video
All products recommended by Engadget are selected by our editorial team, independent of our parent company. Some of our stories include affiliate links. If you buy something through one of these links, we may earn an affiliate commission.
Share
Tweet
Share