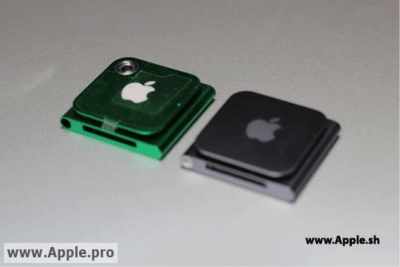 If you'll recall, it was April of last year when we reported on pictures from Apple.pro, which claimed to show a seventh-generation iPod Nano chassis with room for a camera. Not long after, the site posted a second leak of the device, hinting at the omission of the Nano's famous clip in favor of optics. Fast forward to the present, and we're now looking another supposed shot of the unit, however, this time the clip is back and it's made room for the shooter. Like prior Nano-camera efforts, this prototype's loaded with a less-than-whopping 1.3-megapixels of resolution, which M.I.C Gadget claims in its non-final form, took overexposed photos. Apple's apparently also been toying with 2-megapixel prototypes, but those too were apparently deemed unsatisfactory. M.I.C. Gadget also muses the two month old prototype is nearing release, and that it could be released before the traditional fall schedule. Seeing as the Nano's long overdue for a hardware refresh, we'd file that under definitively maybe, but before believing, take copious amounts of salt as you hit the source link below for a bevy of pics.
In this article: 1.3 megapixel, 1.3Megapixel, 7g, apple, apple.pro, camera, idevice, ipod nano, ipod nano 7g, ipod nano camera, ipod nano video, IpodNano, IpodNano7g, IpodNanoCamera, IpodNanoVideo, leak, nano, nano 7g, Nano7g, seventh generation, SeventhGeneration, video
All products recommended by Engadget are selected by our editorial team, independent of our parent company. Some of our stories include affiliate links. If you buy something through one of these links, we may earn an affiliate commission.
Share
Tweet
Share