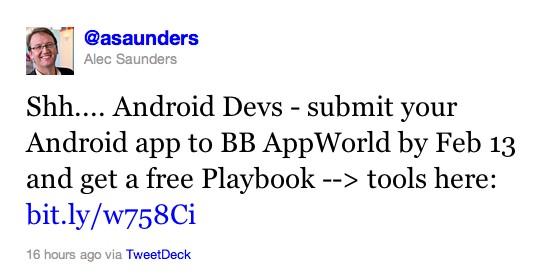 Still wary of dropping $200 on a BlackBerry Playbook? How does "free" sound? That's what RIM is offering to Android developers today, as part of an overt attempt to spur interest in its App World platform. RIM VP of developer relations Alec Saunders announced the offer yesterday via Twitter, reminding devs to submit their apps by February 13th in order to qualify. On the one hand, it seems like a great way to push the PlayBook out on the market. On the other, it's sort of sad. Interested parties can find all the tools they need at the coverage link below.
In this article: android, Android developers, AndroidDevelopers, app, application, BB, Blackberry, blackberry playbook, BlackBerry world, BlackberryPlaybook, BlackberryWorld, dev, developer, offer, playbook, Research In Motion, ResearchInMotion, RIM, tablet
All products recommended by Engadget are selected by our editorial team, independent of our parent company. Some of our stories include affiliate links. If you buy something through one of these links, we may earn an affiliate commission.
Share
Tweet
Share