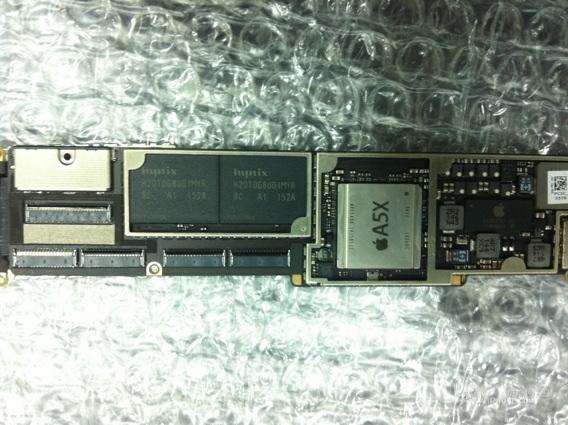 Well, if it looks real, sounds real and is halfway logical, we probably should distrust it all the more. Yes, it's the time when all the rumors, photoshops and general hysteria around Apple's next slab reaches its apex. The photo above was grabbed by the steady hand of sas126, a blurrycam snapper in name only, and posted to Chinese site Weiphone, purporting to be the logic board for the iPad 3. The big news (if true) is the "A5X" silicon, suggesting we'll see an incremental enhancement rather than the wholesale revolutions evident in the A4 and A5 chips that accompanied its predecessors. The SoC (with the Apple logo, to the right of the two Hynix memory modules) carries a date-stamp of 1146, suggesting it was produced in the 46th week of last year. Of course, now that we're getting so close to the actual event, whatever Tim Cook whips out on stage will never match whatever we'd conjured up on our own hearts: so try to dampen down that rampant excitement because we've still got 17 days left to wait.
In this article: A4, A5, A5S, A5X, A6, Apple, Apple A4, Apple A5, Apple A5X, AppleA4, AppleA5, AppleA5x, Blurrycam, Hynix, iOS, iOS 5, Ios5, iPad, iPad 2S, iPad 3, Ipad2s, Ipad3, Rumor, sas126, SoC, System on Chip, SystemOnChip, Tim Cook, TimCook, Weiphone
All products recommended by Engadget are selected by our editorial team, independent of our parent company. Some of our stories include affiliate links. If you buy something through one of these links, we may earn an affiliate commission.
Share
Tweet
Share