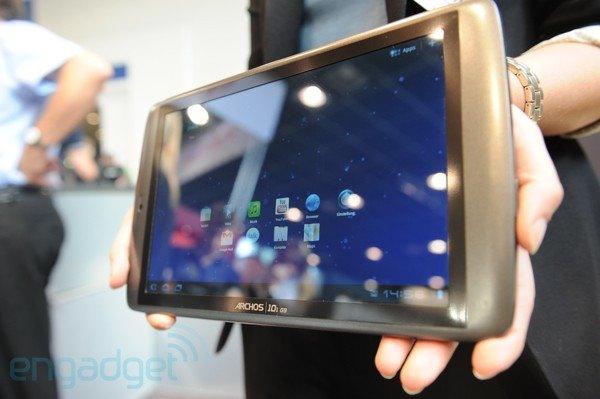 Your smartphone and / or tablet is just begging for an update. From time to time, these mobile devices are blessed with maintenance refreshes, bug fixes, custom ROMs and anything in between, and so many of them are floating around that it's easy for a sizable chunk to get lost in the mix. To make sure they don't escape without notice, we've gathered every possible update, hack, and other miscellaneous tomfoolery we could find during the last week and crammed them into one convenient roundup. If you find something available for your device, please give us a shout at tips at engadget dawt com and let us know. Enjoy!

Archos G9: Let's start off the week of refreshes in a big way. Both the Archos 80 and 101 G9 tablets have received their official upgrade to Ice Cream Sandwich -- more specifically, Android 4.0.3. The update also brings improvements to the Media Center video and music apps, along with fixes to the file manager. Just for good measure, users will also find their G9 now supports Xbox controllers. [Thanks, Simon] [Archos, G9 changelog]

HTC Vivid: AT&T has stated that, in the coming weeks, the Vivid will receive its bite of Ice Cream Sandwich (complete with Sense 4.0), in an update that'll also include Beats Audio profiles. [Android Community]

Motorola Droid 2 Global: A handful of bug fixes await this QWERTY slider, which come in the form of update 4.5.629.A956 from Verizon Wireless. It brings security improvements, fixes an issue that'd caused the device to inadvertently turn on and also resolves device resets when music is played. Also on board, WAV files are now supported by the Visual Voicemail app, and users should now receive messages from Gmail more reliably whenever the Mobile Hotspot is in use. [Droid Life, Verizon Wireless changelog (PDF)]

Toshiba AT200: No surprise here, but Toshiba seems intent on letting users know that Ice Cream Sandwich is coming to its latest tablet. As for a release date? That matter remains up in the air. [Pocket-lint]

Telstra: Aussies will appreciate knowing that Telstra is hard at work on bringing Ice Cream Sandwich to the HTC Sensation and Velocity 4G, the Samsung Galaxy S II and the Sony Ericsson Arc S. The HTC updates should arrive any day now, while the refreshes for the Galaxy S II and Arc S should appear early next month. Not to escape without mention, the PR1.1 update for the Nokia N9 is also said to be right around the bend. [Thanks, Ryan] [Telstra]

Verizon Wireless: Big Red has provided a comprehensive list of every device scheduled to receive the Android 4.0 upgrade. From HTC, the Incredible 2, Rezound, Rhyme and Thunderbolt each made the list, as did the Spectrum from LG. Motorola devices on deck include the Bionic, Droid 4, Droid RAZR and RAZR Maxx, along with the Xoom, Xyboard 8.2 and 10.1 tablets. Finally, the Samsung Galaxy Tab 7.7 and 10.1 also made the cut. [Thanks, Myriam] [Verizon Wireless]

Barnes & Noble Nook Tablet: If you're interested in taking an alpha release of CyanogenMod 9 for a spin on your Nook Tablet, Nathan from the eBook Reader Blog put together a helpful walkthrough video to let you know what to expect, along with a set of installation instructions. While WiFi, sound and the accelerometer are all said to work just fine, the microphone, Bluetooth and hardware video acceleration didn't fare as well. There's also said to be some power management issues to be aware of. [eBook Reader Blog]

webCM9: A new package has been designed to bring a webOS-like task manager for all HP TouchPad users that've since moved on to CyanogenMod 9. [Netbook News, RootzWiki]

BlackBerry Curve 9360: BlackBerry 7.1 OS is now available for subscribers of SaskTel in Canada. The news follows similar releases from Bell Mobility and Virgin Mobile. Updates from Rogers and Telus are also said to be on deck. [MobileSyrup]

Nokia Lumia 800 & 710: Nokia has provided a changelog for the software update 12070 that made news both this week and last for the Lumia 800. In addition to the battery life improvements and camera enhancements, it also brings improved audio performance, provides illumination of the soft-keys at all brightness levels and addresses a nasty bug that'd caused reboots and system freezes. Additionally, the same update for the Lumia 710 is said to bring smoother operation when ending a call. [My Nokia Blog]

Refreshes we covered this week