M. Gorman
@Numeson
March 22nd, 2012
In this article: 2big, external hard drive, external hdd, external storage, ExternalHardDrive, ExternalHdd, ExternalStorage, hdd, impressions, lacie, lacie 2big thunderbolt series, lacie 2ig thunderbolt, Lacie2bigThunderboltSeries, Lacie2igThunderbolt, preview, review, seagate, seagate barracuda, SeagateBarracuda, storage, thunderbolt
We've already seen what Thunderbolt's capable of when it's used in conjunction with a couple of high performance SSDs, but not everyone needs NAND to meet their external storage requirements. What many do deem essential, however, is a ton of room for system backups and multimedia, and Thunderbolt's ability to transfer bits and bytes in the blink of an eye makes it an alluring alternative to other connections. If you find yourself among those desiring such a solution, let us introduce you to LaCie's 2big Thunderbolt series external HDD. The 2big packs dual 3TB spinners on the inside for a grand total of 6TB, and comes from the factory in a software RAID 0 configuration to take full advantage of Thunderbolt's considerable capabilities. This aluminum desktop behemoth has a price to match its name and stature ($799), so we figured we'd put the 2big through its paces to let you know what kind of performance you'll be getting in return for all that cash. So, as the great Rod Roddy would say, come on down (after the break) and let's get to it. 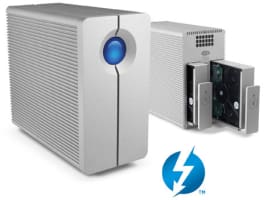 Pull the 2big out of its packaging and you immediately notice just how heavy this thing is -- at a shade under six pounds, it easily outweighs the 15-inch MacBook Pro we were testing it with. This isn't an issue, just an observation, as the weight lends the drive a bombproof feel, and of course, the 2big's not meant to be portable storage. Even still, we were surprised at just how... substantial it is, even though a sizable chunk of that heft comes from its twin Seagate Barracuda 3TB, 7200RPM drives. Access to the twin HDDs is quite easy, as you simply turn the latch using pocket change or a large flathead screwdriver and pull out the drive sled should you need to get at them. The 2big also comes with multiple power plugs, so should you be inclined to lug it with you around the world, you'll be able to plug it in most places you go.

As for the exterior, well, anyone in love with LaCie's design language will be similarly affected by the 2big. It's an aluminum block ribbed on the sides so the whole thing serves as a heat sink, while you'll find the familiar globe-shaped button on the front. It still radiates an azure glow and serves as both a power LED and power button (as it does on the Little Big Disk), but the 2big's orb is embossed with the LaCie company name and we found it wasn't seated as securely as we'd like -- there's some play in the button before it registers a press. Round the back, you'll find dual Thunderbolt ports (for daisy chaining drives or connecting DisplayPort or Thunderbolt monitors), the two drive bay drawers and the power plug. The Hal 9000 look has its detractors, but sorry, Dave, we're a fan of the LaCie's functional and clean aesthetics.

Connecting the thing couldn't be much easier, assuming you've got room for its 3.5 x 6.7 x 7.8-inch footprint and an appropriate cable on hand. That's right... you pay 800 bucks for a drive that only has Thunderbolt connections, but you're responsible for rustling up a compatible cable -- which will result in another $50 disappearing from your bank account. What's irritating about this isn't the extra $50, it's that LaCie didn't just up the 2big's price by half a hundred and include a cable to save its customers some trouble. Anyway, cable in hand, it's simply a matter of connecting it into your Mac, plugging it into a wall outlet and pressing the power button. Bingo, you've got action.

LaCie announces 2big eSATA hub Thunderbolt storage options
LaCie Thunderbolt 2big series available now in 4TB and 6TB sizes
Intel: Thunderbolt coming to PCs, prototype shown at IDF 2011
Naturally, a drive this capacious is likely to be used as a repository for backups, and the 2big performed admirably in that respect. Using Time Machine, the 2big duplicated 117GB of data in 48 minutes, and we created a 143GB bootable backup in an hour and 21 minutes, with an average speed of 35 MB/s using the included Intego Backup Manager Pro software. During these backups, you can hear the drives and cooling fan whirring on occasion, but the 2big is awfully quiet most of the time -- a far cry from its diminutive cousin, the Little Big Disk, which was deafening by comparison. Additionally, we only felt the drive get slightly warm under load, so its finned skin and quiet fan clearly have no problems dissipating whatever heat the drive generates.

In summary, LaCie's latest offering for Thunderbolt users should prove to be a tempting option. Its robust build, massive capacity, quiet operation and, of course, blazing transfer rates all make for quite an attractive package for use as a media and backup repository. Despite those merits, the 2big's premium price is likely to be a turn-off for many. Plus, with Thunderbolt set to become ubiquitous once it starts showing up in PCs, cheaper Tbolt external drive options are sure to proliferate in the not-too-distant future. That said, if you're in need of external storage right now and have the means, you won't be disappointed having the 2big on your desk.
All products recommended by Engadget are selected by our editorial team, independent of our parent company. Some of our stories include affiliate links. If you buy something through one of these links, we may earn an affiliate commission.