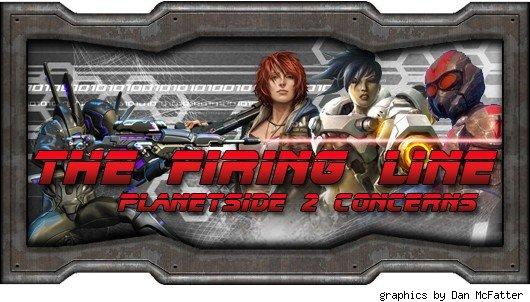 Now that the glow of PlanetSide 2's GDC demo reveal is a couple of weeks back in the rear-view mirror, I've had time to digest it all and adjust my expectations of the game accordingly. Nothing I saw from Matt Higby and company dampened my enthusiasm for Sony Online Entertainment's MMOFPS opus, but a few things I didn't see are niggling at the back of my mind.

Don't get me wrong -- PS2 is still at the top of my most-anticipated MMO list, but there are a few points of contention that could relegate it to the status of fun diversion instead of zomg-must-play-every-day title.

First of all, if you never played the original PlanetSide, then what I'm about to type may sound like unnecessary nitpicking. If you did play, chances are you're at least mildly concerned about SOE's decision to excise vehicle entry and exit animations from its sequel.

On the surface, it seems like a small detail, and the devs are rightly concerned about shipping a bug-free title with polished gameplay instead of adding what some consider to be bells and whistles. In reality, though, the brief animations that showed your PlanetSide character clambering in and out of Galaxy transports, Vanguards, and Sunderers were a vital component in the recipe that made the original game unique.

For one thing, it added an incredible amount of immersion, and though the 2003-era graphics are pretty dated now, I still enjoy the animations to this day because they're another thing PlanetSide has that its peers don't. SOE's artists and animators did a fantastic job capturing the heft of the game's heavy metal hardware, and seeing your avatar unfold himself from the cockpit of a vehicle and dismount with his weapon at the ready is just plain cool.

And I know what some of you are thinking. Gameplay is all that matters, and who cares about goofy things like immersion, amirite? Well, the entry/exit animations had a tangible effect on gameplay as well, since they basically prevented players from instantly taking control of a vehicle and escaping a bad situation. The delay affected the pace of battles both large and small, and it added one more tactical consideration that made PlanetSide less of a game and more of a virtual world.

I'm assuming that SOE is axing the animations due to time and budget constraints. PlanetSide 2 features dozens of unique vehicle models as well as three factional variants, to say nothing of all the different armor combinations players might wear. Rendering all those variables and vehicle interiors would likely involve a lot of pricey man-hours, so it kind of makes sense to put the feature on the back-burner from a project management perspective.

My hope is that PS2 is successful enough to warrant the addition of these animations after release, but I'm not holding my breath on that one. I'm afraid this is another unfortunate example of how MMO development often goes backward instead of forward.

Another concern I have about PlanetSide 2 is quite a bit larger than missing animations. It has to do with the overall ebb and flow of the game, and more specifically, the point behind all the bloodshed. As good as the GDC demo was, and as excited as I am to return to the world of Auraxis, my enthusiasm is tempered a wee bit by the very real possibility that PS2 will be nothing more than a kill-'em-all shooter (albeit on a grander scale than any other shooter can manage).

I touched on this the last time I wrote extensively about PS2 for this column, and I was promptly tarred and feathered by some of the more hardcore PlanetSide veterans. It still concerns me, though, because I'm one of those odd ducks who thinks that MMOs should amount to something more than sticking the pointy end (or in this case, the bullet) into the other man.

Put simply, am I the only one who wants meaningful long-term objectives in an open-world shooter? I mean, I understand why it's fun to kill the same people over and over again in a session-based game like Tribes: Ascend, but with something like PlanetSide, does it not bother anyone else that we don't have a clue what we're fighting for? It's like Hamburger Hill; we work and sweat and fight and die to take that mound of dirt, and for what? It's largely meaningless because it will be re-taken by the enemy the next day. Our mini-victory contributes nothing to the overall war effort, and ultimately it feels like a waste of time.

Now, I realize that some (maybe all) of the fun in PlanetSide is the gameplay inherent in taking that metaphorical hill. Jumping out of a Galaxy on a hot-drop is pure awesome, for example, and it will probably never get old.

Also, I understand that these games take a lot of money to produce, and devs don't always have the time to implement long-term goals like a reason for all the madness. It is a game, after all, and the reason could be as simple as screwing around and being entertained for as long as your play session lasts. When a game is labeled an MMOFPS, though, I think there should be more of an investment in both your character and the world, otherwise it's basically a super-sized version of Battlefield (and all the disposable gameplay that that franchise entails).

SOE's ace in the hole here may well be territorial control and the fact that resources will play a larger role in PS2 than they did in the original game, but since the devs have said virtually nothing about those systems, I'm left to speculate.

There's also the metagame to consider; the original PlanetSide did feature plenty of games within the game for players partial to command and macro-level decision-making. Much like EVE Online's political tomfoolery, though, this part of the game was largely inaccessible to the average player, and it suffered from a lack of both consequences and long-term goals beyond winning a particular pitched battle.

But hey, what do I know, I'm just a casual PlanetSide fan who's hoping that the sequel will amount to something more than your average shooter. And I'm sure you guys will tell me how wrong I am in the comments!

The Firing Line's Jef Reahard has a twitchy trigger finger, a love of online shooters, and an uncanny resemblance to Malcolm Reynolds. OK, maybe not, but at least if he ever kills you, you'll be awake, you'll be facing him, and you'll be armed.
In this article: classic-mmo, design, featured, firing-line, fps, game-mechanics, immersion, matt-higby, mmo-shooter, mmofps, opinion, planetside, planetside-2, ps, ps1, ps2, pvp, sandbox, sci-fi, shooter, soe, sony, sony-online-entertainment, tfl, the-firing-line, third-person-shooter, tps
All products recommended by Engadget are selected by our editorial team, independent of our parent company. Some of our stories include affiliate links. If you buy something through one of these links, we may earn an affiliate commission.
Share
Tweet
Share