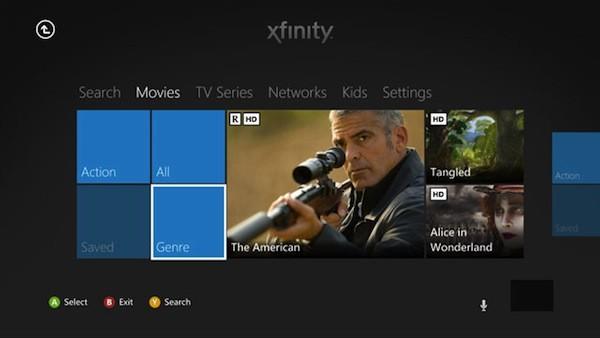 Microsoft has confirmed via multiple mainstream media outlets that today is the day for several more high-profile video apps to appear on its Xbox 360, namely Comcast Xfinity TV, HBO Go and MLB.tv. There's not a lot of detail on the apps themselves, although the HBO Go and MLB.tv services are familiar due to their availability on other platforms, while we've already heard the Xfinity TV app will mirror the experience and content already seen on the PC. All three naturally include significant Kinect integration, and bring the total number of video apps (already including recent additions like Verizon FiOS and YouTube) available to 36. Interestingly, another stat Microsoft is focusing on is that the time spent using its consoles to watch online video is now over half, outpacing the time users are spending playing its games for the first time. Head of marketing and strategy for Xbox Yusuf Mehdi is quoted by the LA Times as saying usage is up 30 percent from a year ago. We're not sure if that just reflects gamers powering through to (and possibly being disappointed by) the ending of Mass Effect 3, but we'll be keeping an eye on our dashboards for the new apps all the same.
In this article: apps, baseball, comcast, dashboard, hbo, hbo go, HboGo, hdpostmini, internet video, InternetVideo, microsoft, mlb, mlb.tv, online video, OnlineVideo, sports, streaming, video, xbox, xbox 360, Xbox360, xfinity, xfinity tv, XfinityTv
All products recommended by Engadget are selected by our editorial team, independent of our parent company. Some of our stories include affiliate links. If you buy something through one of these links, we may earn an affiliate commission.
Share
Tweet
Share