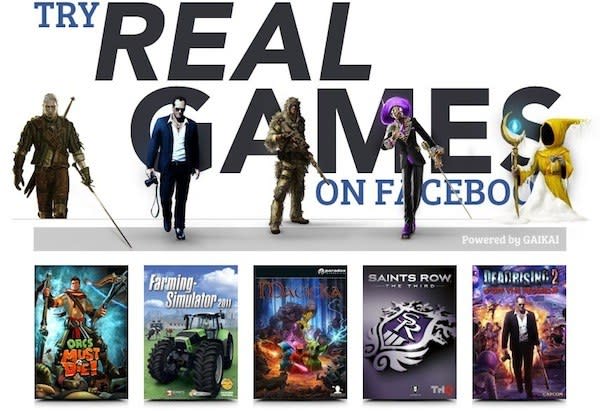 Gaikai's certainly grown leaps and bounds since its early days, and today the cloud gaming firm takes another step by joining the largest social networking platform on the globe. For starters, this first beta of Gaikai's Facebook application is available to North American / European gamers, offering support for browsers such as Internet Explorer, Chrome, Safari and Firefox on Windows, OS X or Linux machines. Gamers who've fiddled around with the outfit's previous betas or Walmart's Gaikai powered Gamecenter will know the drill: streaming game demos in the frame of your web browser.

Ready to try before you buy? The setup is serving up samples of Saints Row: The Third, Dead Rising 2, Magicka, Sniper: Ghost Warrior, The Witcher 2, Orcs Must Die! and Farming Simulator 2011. Gaikai CEO and co-founder David Perry told us that while the outfit's current Facebook rigging is still centered around demos, it's primed to push full titles if and when a publisher requests it. "Our goal is to get games as accessible as movies and music," he told us "so games get the chance to compete." Gaikai v1.0 is live on Zuck's site now, so click the source link below, pop in your Facebook credentials and you should be all set.

By streaming their games through Gaikai video game publishers can now easily reach hundreds of millions of potential new players in North America and Europe. The beta will allow gamers to try out a selection of games for free.

"People don't want to leave Facebook to play games – Zynga's phenomenal success is proof of that," said David Perry, CEO of Gaikai, "Cloud Gaming means that the game doesn't need to be downloaded and run on your computer, it literally means the game runs out on the internet, in the cloud, with the experience being streamed to the players. Most video game publishers are now seeking to grow their digital customer base and unlike movie and music services like Netflix and Spotify, Gaikai gives the game publishers relationships with the customers."

Perry continues, "The power of Facebook is not only in the vast size of the connected audience, but also in the quality of the social ties and interactions that occur within the network. The Facebook social graph fuels our mantra "Try it for free", "Share it if you like it", "Buy it if you love it"."

The first games to try in the Beta v1.0 Launch are:

"Gaikai's technology allows us to deliver our games to a wider audience," stated Kevin Kraff, Vice President of Global Brand Management at THQ. "As content creators it's not only paramount that we give our players great entertainment but also that we give them a choice in how they access it. Streaming inside Facebook is not only revolutionary, but is something that both new and existing players will benefit from."

What you need to play:
The Gaikai Facebook app is currently available in North America & Europe. To play you will need to be in a Gaikai coverage area with a broadband internet connection and Java installed. Gaikai works on any PC or Mac using Windows, Mac OS or Linux. Gaikai works in all major browsers including Internet Explorer, Chrome, Firefox and Safari.
Use this link to experience Gaikai's Facebook app: https://apps.facebook.com/gaikai-games/