It's the other One. While HTC's One X and One S jostle over which has the more potent processor, and customers weigh high-definition screens against high-science coatings, the One V has held back. Quite rightly, as this phone has no delusions of flagship grandeur. Negri Electronics has lent us an off-gray HTC One V to try out, although it will also be available in a black finish. With a nod to HTC's design past, a now relatively modest 3.7-inch screen and a ho-hum single-core 1GHz processor, the phone's looking to capture first-time smartphone buyers, along with anyone looking for a reasonably priced upgrade. For the money -- around $346 (£229) -- they'll get the latest version of Android topped by a slightly tweaked version of HTC's Sense 4 skin. Is this the new benchmark for entry-level smart phones? Can a such a weedy processor handle Android 4.0? And what's with that chin? We'll answer all those questions and more after the break. 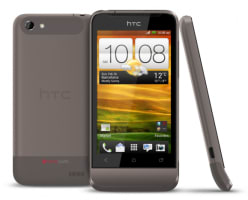 A re-imagined HTC Legend for the new smartphone world. That's probably the best way to describe it. The reassuringly solid aluminum unibody has returned and, given the 3.7-inch screen, you should almost certainly be able to handle the One V with ease. The anodized shell is tightly beveled -- almost to the point of being too sharp-- while the screen is raised slightly above the rest of the construction (a relief, then, that there's a layer of Gorilla Glass shielding it). In day-to-day use, we found the phone resilient to scratches on both the front and back sides -- possibly more so than the acclaimed micro-arc oxidized coating on the One S.

This slightly raised surface includes a trio of capacitive controls, including the ICS-friendly multitask button at the bottom right. The speaker grille is the only feature that disrupts the flat front -- presumably due to cost constraints, it isn't an integral part of the body like the machined speakers found on the One X and S. A front-facing camera is also conspicuously absent and we assume this was another cost-cutting measure. The frame is just 9.4mm (.36 inches) thick, and remains uniform through the phone's curved base. Yes, the chin is back and it'll be as divisive as ever. Unlike the Legend, it's a largely blank addition to the phone -- there's no optical trackpad this time, and all the buttons have migrated to other parts of the handset. It keeps the rest of the body flat while bringing the mic closer to your mouth. The rear, made in part from soft plastic, covers slots for the microSD and SIM (not micro-SIM) slots, but there's no battery access.

Removable storage is a necessity, not a choice on the One V, which arrives with under 1GB of useable space. To put that in perspective, you'll need a microSD card to use even the likes of Spotify and Instagram. The contoured sides are interrupted only by the volume rocker and non-MHL micro-USB port, hewing to the simple aesthetic marking the rest of the One series. Up top, you'll find the notification light alongside the headphone socket, with the power button also sitting along that top edge. The 5-megapixel camera and LED flash are both housed in a soft grey plastic panel similar to the removable cap at the base.

Admittedly, the whole design may appear pretty safe compared to HTC's recent forays, but it still registers as playful. We kept rocking the phone upwards onto that chin, and we dare say it's even a bit adorable.

The One V squeezes 800 x480 resolution into a 3.7-inch screen, and it's another Super LCD 2 panel, like the One X. And though it lacks high-definition credentials, with a screen density of 252 ppi it's not embarrassingly grainy. Viewing angles are also impressive, and it fares respectably outdoors. More importantly, though, it embarrasses existing entry-level phones -- a group where quality screen technology has often (if not always) been sacrificed. Sure, it doesn't stand up to the expansive likes of the One X or Galaxy S II, but color composition is excellent (better than the One S, even) and 3.7 inches isn't that small. At least, not for a lot of people. We noticed, however, on our two review samples that there was some worrying yellow discoloration on both screens in the top left corner and was especially noticeable when on full brightness white.

You're not going to get HTC's state-of-the-art imaging technology here -- a 5-megapixel sensor is a notable drop from the 8-megapixel shooter found on the rest of the One series. HTC's ImageChip is on board -- but the difference in performance is presumably due to that gap in processing power. The app still steers like the rest of the series, however, with the same stripped-down interface. The HDR mode, simultaneous video and still capture and faux-tilt shift have all made the transition to this humble handset, although burst capture and speedy shot-to-shot times have disappeared along with that dedicated camera chip. Compared to samples taken with the One S colors weren't as vivid, and while HTC's second-in-command had a tendency to over-do it on the contrast, the One V's results were still slightly drab. Fortunately, the f/2.0 lens is still in tow, which means low-light performance was predictably strong. The sensor often struggles with adjusting to sudden light changes, but it gets there in the end -- something that would be less forgivable on video capture.

The One V can record video in up to 720p resolution, and also comes with the same slow-motion option found on other recent HTC models. Light performance is good, and HTC kept both auto-focus and touch-to-focus on the camera -- something that might well slot it above many high-end models capable of recording full 1080p video but lacking these focus controls.

Android 4.0 on an entry-level device. HTC's drawn a line in the sand, and it's something that other manufacturers would do well to copy. Even better, the single-core processor seems largely up to the task. Because of the power differences there have been some sacrifices -- and these have mostly come in the form of a watered-down Sense 4 skin. You'll find that while it looks similar, certain visual flourishes such as the full-screen weather animations and globe view within the weather widget have been cast out. Pinching to view all your home screens at once doesn't have any effect and the 3D transitions between screens are gone too. The keyboard has also been tweaked, losing the navigational arrows found on HTC's larger 2012 phones -- a sensible choice, we say, given the reduced screen size. We've already done an in-depth take on HTC's latest Android skin, but the differences between the One V and the rest of the One series are worth noting. Minor touches, like the ability to "zoom" on text within SMS messages, are still here, while menu and settings navigation is also indistinguishable from other phones running Sense 4. However, the One V isn't compatible with the HTC's Media Link HD dongle and -- like the One S -- misses out on the NFC train, both hardware- and software-wise. Something we didn't catch while poring over the One V's spec sheet when it was first announced is that there's also no digital compass, meaning Google Maps' orientation won't change as you turn to face a different direction.

The phone largely performed better than expected on our benchmarks. Despite a single-core Qualcomm Snapdragon S2 MSM8255 ticking away at 1GHz, the phone kept up with most of our demands. However, browser performance is underwhelming, and the phone occasionally stutters while navigating menus and using apps. It often needs a few seconds to catch its breath when starting apps and transitioning between them.

Compared to the Samsung Rugby Smart, another recent single-core smartphone, the One V performs well. As we've already said, the phone is generally capable, but struggles with moderately to intensely challenging challenges, like graphics-heavy games and visually dense websites. Swiping around Engadget, the browser often stuttered, attempting to parse the next picture as we scrolled. There were occasionally greater hurdles, like when we used Google's autocomplete search box, and the One V really had to think about what it was doing. One area where the One V does excel -- and something that surprised us, given HTC's past record on this -- is the device's boot-up time. Seconds after turning on the phone, we were able to boot up apps and make calls. We suspect this is thanks to HTC's FastBoot option, found in the battery settings. The One V offers admirable runtime, lasting just over nine hours during our standard battery run-down test, which entails playing a video at 50 percent brightness, with WiFi and mobile data on. In more typical use, with plenty of music playback, Twitter, email and Facebook all synced and several browser missions, we got closer to two days of use on a single charge. Given the battery's relatively frugal 1,500mAh capacity, it's a pretty respectable showing. Alongside WiFi (802.11b/g/n) and Bluetooth 4.0, the One V juggles tri-band HSPA (850/900/2100), capable of 14.4Mbps down and 5.6Mbps up and quad-band GPRS (850/900/1800/1900) radios. On the HSPA connection, we saw speeds around 2Mbps down and 1.2Mbps up, which is comparable to other HSPA devices we've tested. We also enjoyed clear calls, even on the busy streets of London.

The One V is the third and final piece of HTC's game plan: a stylish, petite, entry-level model that will hopefully draw in anyone looking for a new phone running Android's latest. Indeed, it's a capable phone on par with several once high-end single-core devices from last year. Even better, this one is cheaper and arrives with Android 4.0, in all its multitasking, adjustable widget glory. It's also a phone that's visibly HTC and exudes as much character as the-lovely One S and One X -- a boon, given the sheer number of Android phones floating around these days. Our main complaint here isn't the camera, nor the build quality, nor the screen (aside from the discoloration); it's the processor. A little bit more horsepower would have really helped the One V stand out as the go-to low-price Android phone. Aside from that, the One V is a compelling proposition for anyone hunting for their first smartphone, or who knocked on the Android party door a little early (still packing that original HTC Legend?). Sure, with a bit more cash you can get the Galaxy S II, with its bigger screen and more potent processor, but are you willing to wait around (like many people still are) for that software upgrade? Here, there will be no update hassles; just Ice Cream Sandwich with a newcomer-friendly Sense skin and a tempting sub-$350 price tag. And a chin. Don't forget the chin.