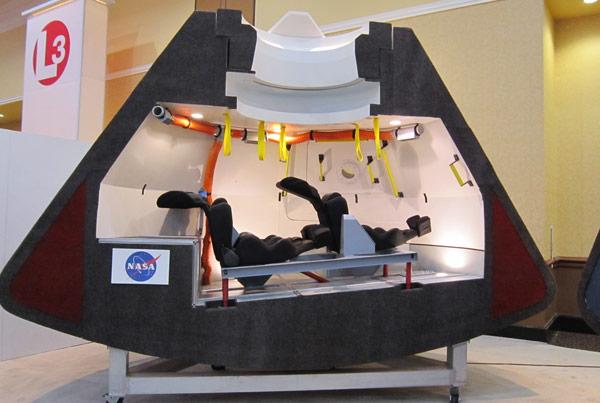 With the Space Shuttle now officially grounded, NASA has been researching alternatives for ferrying astronauts from Earth to the International Space Station, orbiting some 230 miles above the planet. One such vehicle has made its way from Boeing's HQ to the National Space Symposium in Colorado Springs, where a full-size model is on display for conference attendees. Externally, the spacecraft appears very similar to the reentry modules of yesteryear, measuring 14.5 feet with room for up to seven people. The craft is designed to make its way through the atmosphere mounted to an Atlas V rocket, and is rated for up to 10 roundtrip missions. As is typical with spacecraft, it looks like astronauts won't be traveling with first-class accommodations -- things will likely feel quite cozy when the CST-100 is at capacity -- but such conditions come with the territory. There's no date set for delivery, but the craft could be making its way to space as early as 2015, and has reportedly been tested in the Nevada desert as recently as this month.