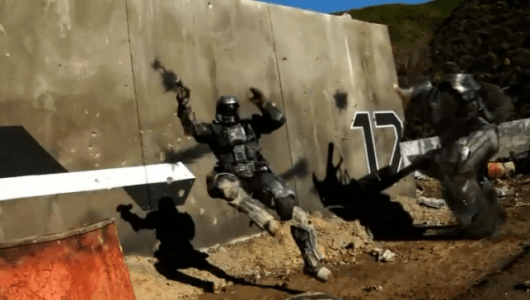 Microsoft didn't mess up when it hired a fleet of actors in Spartan armor to deliver the Halo script to potential movie studios, and the deal didn't stall when each production house had a fixed amount of time to read and bid on the screenplay. In the end Microsoft wanted too much, and it didn't know how to ask for it - it only knew how to demand. The industry differences between Microsoft and the film's two production studios, Fox and Universal, eventually led to the project's implosion, Jamie Russell explains in his book, Generation Xbox: How Video Games Invaded Hollywood.

Microsoft's terms included $10 million against 15 percent of the box office gross, a budget of at least $75 million and fast-tracked production, as well as creative approval over the director, regular flights from Seattle to L.A. to review post-production footage and 60 first-class plane tickets for Microsoft personnel and guests to attend the premiere, all at the expense of whichever studio picked up the script. Not even Harry Potter was getting this level of concessions, Larry Shapiro of Hollywood talent agency CAA says.

"What the games industry doesn't understand is that this town is all about lunch," Shapiro tells Russel. "It doesn't happen like that in the games industry. If there was a movie studio going out to the games publishers to license Avatar or something like that, they'd say 'Ok we're licensing Avatar, send us your best deal.' But none of the games publishers would talk to each other and say 'Hey, what are you going to offer them?'"

Fox and Universal teamed up on Microsoft and stripped its bargaining power. Peter Jackson, who Microsoft wanted to direct the film, signed on as a producer and sent in his young padawan protégé, Neill Blomkamp, as director. Blomkamp, younger, a gamer and more in tune with the creative end of film production, didn't get along with the big wigs at Fox. Blomkamp wanted Halo to be a gritty, cyberpunk action-thriller, not "just a generic, boring film - something like G.I. Joe or some crap like that, that Hollywood produces."

Blomkamp's early footage, featuring costumes from Jackson's Weta Workshop, was pieced together as a promo for Halo 3, and after a $12 million investment from Universal, the rest of the movie deal fell apart because Microsoft wouldn't budge on any money issues. Check out Blomkamp's short films here, and imagine what Halo on the silver screen could have been.

In this article: book, film, Halo, Halo-3, Hollywood, jamie-russel, microsoft, xbox
All products recommended by Engadget are selected by our editorial team, independent of our parent company. Some of our stories include affiliate links. If you buy something through one of these links, we may earn an affiliate commission.