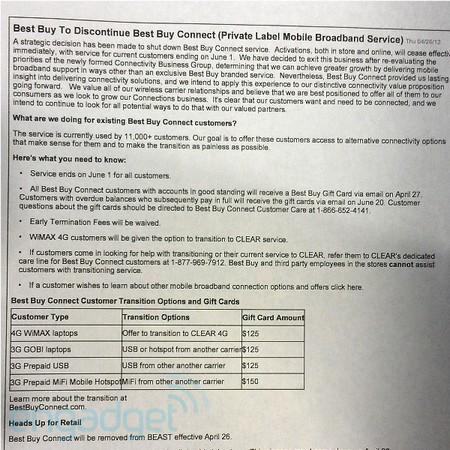 Remember Best Buy Connect? If so, you'll soon have a few more megabytes of humanized DDR3 freed up, as it appears that the retail giant is ready to put the kibosh on its own branded mobile broadband service nearly two years after it was first unveiled. According to the internal memo shown in the above screenshot, new activations are no longer allowed effective immediately, and the service for legacy customers will be cut off on the first of June.

So why the change of heart? Apparently Connect is the victim of a reshuffling of priorities, and the company determined that it "can achieve greater growth by delivering mobile broadband support in ways other than an exclusive Best Buy-branded service." Of course, this is bound to upset more than a handful of folks who have been relying on Connect for their data needs, and the retailer isn't leaving them completely in the dark: to help smooth out the transition, all Early Termination Fees will be waived, and all customers will receive a $125 or $150 gift card via email to curb the cost of moving to a different carrier. WiMAX Connect users, additionally, will also be given the option to switch over to Clear service. We're still awaiting official confirmation from Best Buy -- as of this moment, the official website remains up and running as if it's none the wiser -- but we'll update as soon as we hear more.

Update: Best Buy has now officially confirmed to us that the service will indeed be shut off on June 1st.

In this article: best buy, best buy connect, BestBuy, BestBuyConnect, broadband, connect, data, exclusive, mobile broadband, MobileBroadband, mobilepostcross
All products recommended by Engadget are selected by our editorial team, independent of our parent company. Some of our stories include affiliate links. If you buy something through one of these links, we may earn an affiliate commission.
Share
Tweet
Share