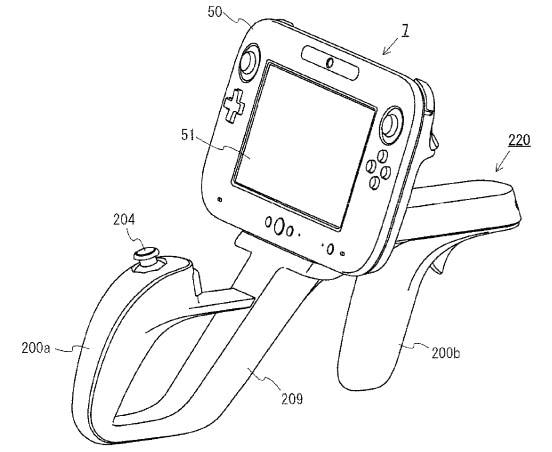 Little did we know that, just two months after we were trying the Wii U for ourselves, Nintendo was busy patenting nearly everything its unique game console would have to offer. A pair of just-published US Patent Office applications filed last August get into the nuts and bolts of how the controller and the legacy Wii remote will play with the new device. It's clear that the patent work had started before Nintendo had redesigned the main system -- the box at the center of the patents looks like the existing Wii -- but it does show the nitty-gritty of things we only saw at last year's Nintendo E3 keynote, such as the gun attachment or playing golf with a combination of the Wii U controller and the traditional Wiimote. Nintendo also gave itself some wiggle room on the controller's screen size: although the LCD is officially 6.2 inches across, the patent allows that it might be "5 inches or larger." We're wondering how much of the overall look and technology will survive through to the finished Wii U design's unveiling at this year's E3. For now, though, you can explore the patents yourself at the links below.

In this article: attachment, console, consoles, controller, controllers, e3, e3 2012, E32012, game, golf, gun, nintendo, nintendo wii, nintendo wii u, NintendoWii, NintendoWiiU, patent, patents, USPTO, video game, video games, VideoGame, VideoGames, Wii, wii remote, wii u, Wiimote, WiiRemote, WiiU
All products recommended by Engadget are selected by our editorial team, independent of our parent company. Some of our stories include affiliate links. If you buy something through one of these links, we may earn an affiliate commission.
Share
Tweet
Share