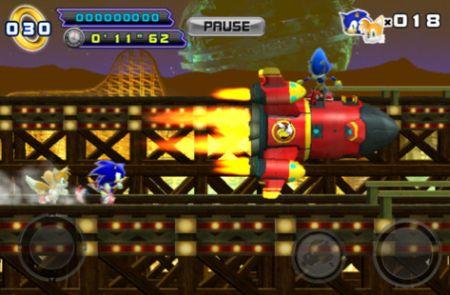 The big question with Sonic games is always if it's as good as the old titles on the Sega Genesis and the Dreamcast, and as usual, the answer here with Sonic 4 Episode 2 (yes, that's how they're releasing these) is unfortunately no. But that's not really a bad thing -- this is pretty good 2D Sonic, put together with quality graphics and plenty of content to play through. It won't compare to the old titles (because what does, really?), but if you're just looking for Sonic and Tails to run around in a colorful world, you'll get it here.

Yes, Tails is back in this one, and he and Sonic team up to run, do a little flying, and race through lots and lots of levels together. You can even hook up with two players over Bluetooth, one on Sonic and the other on Tails. Just like the last Sonic on iOS, the proceedings are plenty colorful, varied from stage to stage, and while the controls are only virtual (actually, iCade compatibility would be a nice bonus here), they work about as well as virtual controls can.

Sonic 4 Episode 2 isn't a bad game at all, though like all of the other Sonic titles out there, it probably won't live up to your memories of what the series once was. If you want old school Sonic action, and wouldn't mind seeing Tails in 2D after quite a while away, the game's available for $6.99 in a universal version right now.

In this article: daily app, daily iphone app, episode 2, Episode2, iOS, iphone, newsletter, review, sonic 4, sonic 4 episode 2, Sonic4, Sonic4Episode2
All products recommended by Engadget are selected by our editorial team, independent of our parent company. Some of our stories include affiliate links. If you buy something through one of these links, we may earn an affiliate commission.