When it comes to business-friendly features and comfortable keyboards, Lenovo is king. And while the PC maker is no stranger to powerful systems (here's looking at you, ThinkPad X220), it's not necessarily the first brand that comes to mind when you're in the market for HD video streaming and a little gaming. But those are just the sorts of things Lenovo hopes you'll do with the IdeaPad Y480, which ups the multimedia ante with a new GPU from NVIDIA, along with a quad-core Ivy Bridge processor.

The notebook complements that power under the hood with an elegant, understated design and flourishes such as JBL speakers -- all for a reasonable starting price of $849. At 5.1 pounds, it may not be the lightest 14-incher around, but it packs some of the most robust internals in its class. Less forgivable, though, is the notebook's middling 1,366 x 768 display; when you have that graphics oomph, you want the high-res visuals to match. Can its amped-up insides and bang for the buck make up for that less-than-premium screen? Join us after the break as we make that determination.%Gallery-155853% 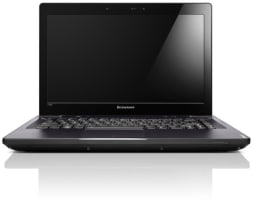 If the IdeaPad Y480 were just any old 14-inch notebook, its 5.1-pound, 13.6 x 9.4 x 0.9-inch body would seem a little clunky -- it outweighs other 14-inchers such as the Lenovo IdeaPad U400 and the Dell XPS 14z (both 4.4 pounds), though it's still not as bulky as 14-inch gaming powerhouses like the Alienware M14x (6.45 pounds). Lenovo took pains to give it a high-end look, using aluminum done up in a brushed-metal treatment on the lid and palm rests. The design isn't a huge departure from the earlier Y470 -- one main difference is that the newer model lacks a thin strip of red around the lid -- an omission that gives the Y480 a slightly classier look.

Along with a DVD drive, Lenovo's offering two USB 3.0 ports, a pair of USB 2.0 sockets, HDMI out, VGA and a 6-in-1 card reader. You'll find most of the ports on the left side of the machine; the right side houses the headphone and mic jacks, the USB 2.0 connections, and the DVD drive. There's also a single-megapixel, 720p webcam front and center on the bezel.

Lenovo and solid keyboards are almost synonymous, so it's no surprise that the Y480 provides a good typing experience. Lenovo kept up the laptop's premium design cues by adding in backlighting, a feature that even the more expensive IdeaPad U300s lacks. You won't find any shallow keys here; the recessed, chiclet-style spread is well spaced, and the slightly rounded keys registered our presses seamlessly. We noticed a disturbing amount of flex, however, especially at the top of the keyboard. One other gripe is that the keys' responsiveness is accompanied by plenty of clicking and clacking: we're already loud typists, and the IdeaPad Y480 didn't do anything to endear us to our neighbors in the office.

The Y480's Synaptics trackpad wasn't as impressive as its keyboard, however. We like the integrated-button design, and in general we had little trouble registering taps. Though the trackpad offers a tad too much resistance for our taste (even after we tweaked the settings), it is plenty responsive for executing gestures such as pinch-to-zoom and two-finger scroll.

Given the brand-new GPU, you'd think the Y480 would sport a brilliant screen to match that graphics power.

Given the brand-new GPU under the hood, you'd think the Y480 would sport a brilliant screen to match that graphics power. We were disappointed, then, that Lenovo opted for a 1,366 x 768 resolution on the laptop's 14-inch glossy panel. That's not to say that the screen is a surprise for a budget-priced system of the size -- it's just a reminder that this isn't a high-end media machine like the Alienware M11x or the MSI GT70. When we fired up World of Warcraft and Mafia II, we saw accurate colors, if not the crispest details; for enjoying graphics-intensive titles, 1,600 x 900 or higher would have been ideal.

The glossy screen means you'll have glare to contend with, especially in office environments with ample overhead lighting. When we watched a trailer for The Dictator, images began to wash out as soon as we tipped the screen more than a few inches forward. Without any harsh light to play off the screen, the panel provides decent viewing angles, though we wouldn't recommend it for more than three people watching at a time.

Like the U300 and U400, the Y480 includes Intel Wireless Display for mirroring your laptop's screen on an HDTV or monitor. The technology requires an HDMI adapter for your TV, but once you have that, the setup is quite simple – and considering the laptop's modest display, you may want to take advantage of WiDi to enjoy a higher resolution.

The IdeaPad's Y480 JBL speakers provided crisp, loud audio when we watched trailers and played games. With the sound at max volume, you should have enough oomph to fill a medium-sized room. When we played tracks from our Spotify account, vocals and instruments sounded accurate, though bass-heavy tunes came through a bit tinnier than we would like.

When it came time to put those NVIDIA graphics to the test, the IdeaPad Y480 didn't disappoint. In 3DMark06, it scored a phenomenal 10,826, which trumps nearly all other recently reviewed machines save for the MSI GT70 (14,073). When we fired up World of Warcraft with settings on default and the resolution at 1,366 x 768, we averaged 59 frames per seconds, and graphics were smooth. Maxing out the graphics lowered our frame rate to 31 fps.

In our everyday usage, the IdeaPad Y480 carried on like a champ, accommodating web surfing across two browsers, music streaming through Spotify and writing this review in Notepad. Adding gaming to the mix quickly heated things up – less than 30 minutes into a round of Mafia II, the laptop's fan began to whir, and the bottom felt significantly warmer. The Y480 didn't get scalding hot, mind you, and its form factor doesn't lend itself to resting on your lap for long, but the heat is definitely noticeable. It took a reasonable 48 seconds for the Y480 to boot into Windows; once it was up and running, it offered zippy performance and rarely tested our patience with that blue loading circle of death.

Update: As some of you have pointed out, the Y480 runs off a new NVIDIA GPU, but it is not a part of the Kepler family. We've corrected the review accordingly.

Lenovo rates the IdeaPad Y480 for up to five hours of runtime, but in our video rundown test, the notebook lasted a more modest three hours and 20 minutes. That time isn't the best we've seen among 14-inch laptops, but then again this laptop has more taxing quad-core Ivy Bridge innards. Also, it's very likely that users would keep this machine plugged in most of the time, anyway. In more anecdotal terms, the Y480 saw us through about three hours of web surfing, word processing and light gaming.

The Y480 comes with a relatively light pre-load: CyberLink Power2Go, Google Chrome, McAfee Internet Security, Microsoft Office 2010, ooVoo, Windows Life Essentials and YouCam webcam software. Nothing here is a huge surprise, but it's better than having too much bloatware. There's also OneKey Recovery 7.0, a tool for backing up and recovering your data.

In addition, Lenovo bundled some of its own branded software, including VeriFace for logging into the laptop with the webcam and EE Boot Optimizer for improving the system's startup time.

As one of the first Ivy Bridge laptops to cross our desk, the Lenovo IdeaPad Y480 impresses.

If you're looking for a 14-inch multimedia laptop with strong performance and a lighter design than the Y480, the $1,000 Dell XPS 14z is a solid option. It does cost about $150 more than Lenovo's new IdeaPad, but it crams its 14-inch display (also 1,366 x 768) into a 13-inch body and weighs just 4.36 pounds. You also get a Sandy Bridge Core i5 or Core i7 processor, up to 8GB of RAM and discrete graphics (Intel's HD Graphics 3000 coupled with NVIDIA's GeForce GT520M). Most notably, the XPS 14z offers a more powerful 8-cell battery which lasts for about five hours -- significantly better longevity than you'll get from the Y480.

Maybe you're looking to step up to Ivy Bridge, in which case the upcoming $800 Toshiba Satellite P845 might be more your cup of tea. Along with an optional NVIDIA GeForce 630M GPU, you get Harman Kardon speakers and a Blu-ray player (depending on the configuration option). This notebook doesn't ship till June 24th, so its battery life and performance haven't been benchmarked like the previous system.

The recently upgraded HP Pavilion dv4, which will also ship in June, starts at $550 and runs the same Ivy Bridge processor as the Y480 as well as an optional NVIDIA GeForce GT360M GPU. For storage, you get a 1TB hard drive spinning at 5,400RPM, and there's 4GB of RAM on board (compared to 8GB for the Y480). There's Beats Audio too, which is a boon for any multimedia notebook. At 4.8 pounds, it's also lighter than the Y480.

A wave of new Ivy Bridge laptops is about to descend upon the world, and as one of the first to cross our desk, the Lenovo IdeaPad Y480 impresses. It does its best to straddle the high-performance and all-purpose categories, and ultimately does a fine job juggling those two identities. While it's not the thinnest and lightest 14-inch option, it's quite a looker with its gray brushed-metal finish -- and it's thick enough to include a DVD burner, which should come as a relief to anyone who can't quite let go of optical media. Let's also not forget the fresh NVIDIA GPU, which enables high frame rates and fluid gameplay. All that said, it's a shame to see laptop makers like Lenovo and others couple that graphics power with 1,366 x 768 displays. The lack of a 1080p or even 1,600 x 900 upgrade option may be reason enough for gamers, photo enthusiasts and streaming addicts to look elsewhere. For those who just want something a little more substantial than an Ultrabook, though, this is a solid, affordable, all-purpose option.