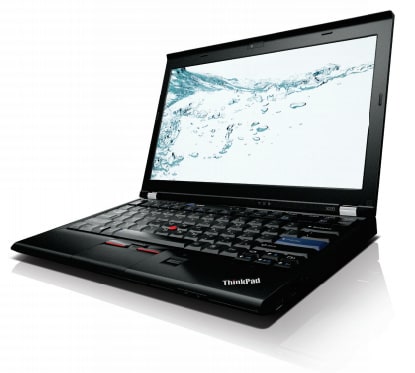 Admit it, when you look at the picture above, all you really see is a laptop with a design that hasn't changed much in the last ten years. It's true, based on its professional aesthetic alone, the ThinkPad X220 can't really be distinguished from the other X Series laptops Lenovo's released pretty much on an annual cycle, but there's much more than meets the eye with that there ultraportable. The 12.5-inch machine is filled to the brim with the latest and greatest technology, including a new Intel Sandy Bridge Core i5 processor, an IPS display, and a six-cell battery. And if you look even closer, Lenovo's made some small tweaks to the touchpad and keyboard, which make more difference than you'd ever think. The point is, that all-too-familiar ThinkPad can deceive you with its boring business looks, but it's arguably one of the best laptops we've ever tested. Hit the break to find out why we think it's so laudable.

How would you rate the ThinkPad X220?
We want to hear what you think. Post a quick review now to join the conversation!
Write a review

We've already established that the X220 has the ThinkPad look and feel that laptop users have grown numb to over the years, and while it may be understated and plain by today's standards, we still think there are parts about it that are pretty timeless. The matte black plastic body gives the system a uniform look, which sure does beat the plethora of mismatched systems out there (see a system like the ASUS U30Jc), and the lid is still blanketed with a rubbery coating. Obviously, the laptop industry's move to metal exteriors makes the X220 look a bit more sissy than rival business lappies (i.e. HP's EliteBooks and Dell Vostro), but as we've said before, it really is still tough as nails. The metal hinges keep the screen wobble-free and the bottom of the case feels tougher than most.

Yet despite its rigidity and powerful internal organs, the X220, like the X200 and X201 that came before it, is still incredibly light. The 1.25-inch chassis weighs just 3.6 pounds, and that's including its six-cell battery. Strapping on the slice battery adds an extra 1.16-inches in thickness and an extra 1.4 pounds to the overall package. The upside is that the extra battery fits pretty flush with the system, and thus doesn't block any of the important ports -- things like a trifecta of USB jacks, an Ethernet port, headphone connector, and VGA / DisplayPort sockets. There's also an ExpressCard 54 and four-in-one card slot. We should also note our review unit came with a single USB 3.0 port, but that's only available on certain configure-to-order models.

Lenovo's always made some of the best laptop keyboards out there, and the board sitting within the X220 is no different. The curved keys provide just the right amount of feedback, and the spacing is almost perfect for touch typists like us. Actually, thanks to the slightly expanded 12.5-inch screen, Lenovo was able to work on the spacing quite a bit, and though we didn't have an X201 to compare it to, the deck is far from cramped. On top of that, there's absolutely no flex to the panel, although we did find the Z key on our review model to be a bit loose – we had to snap it correctly back in place, and even then it wouldn't register our keystrokes on occasion. We're hoping this issue isn't widespread and is just a review unit glitch, but it's hard to tell with so few of these out and about. As you can see from the pictures, Lenovo's also shrunken down the function row, though the ESC and Delete keys still remain oversized.

As with most ThinkPad's there's no shortage of navigation options on the X220 -- unsurprisingly, Lenovo's still not giving up on its pointing stick and touchpad combo. The famed red nub resides smack in the middle of the keyboard, but the bigger news is the new ClickPad -- effectively a touchpad with integrated mouse buttons. The pad itself still has those slightly raised braille-like bumps, but because the buttons are integrated, the surface is longer and wider than the previous X200. (Lenovo says it's actually 45 percent larger now.) That said, the 3.0 x 1.95-inch pad still isn't as spacious as we'd prefer, and it makes for a pretty restricted experience. The pointing and clicking functionality isn't half bad, but the multitouch sensitivity was lacking. Even when we updated with new drivers, it wasn't all that responsive to two-finger scrolling or pinch-to-zoom gestures. So, ironically, despite the two modes of navigation, we actually opted to add a third into the mix – our Logitech Anywhere Mouse MX.

As soon as you open the now-latchless lid and power on the system, you'll notice a shockingly crisp blue background on the 12.5-inch matte display. The IPS 1366 x 768-resolution screen doesn't just display great looking colors and images, it also pays off in incredible vertical and horizontal viewing angles. Regardless of the angle we put this thing at, we were able to make out what was on screen. Naturally, we wish there was a higher resolution option, but we'd still say this laptop's display is pretty close to perfect, especially in comparison to the cheap, glossy panels we see on so many machines these days.

You wouldn't know it by looking at it, but Lenovo has poured a commendable amount of blood, sweat, and tears into a few new video conferencing aspects, so we figured they were worth a deeper look. The 720p webcam served up crisp images of our mug in Skype – so crisp, in fact, that our caller was quick to point out our lack of makeup – and the new noise canceling mics, which are designed to suppress keyboard noise, proved superior to the one on our MacBook Pro. We recorded a quick bit of audio on both systems, and while we could make out the clicking of the keys on the ThinkPad, it was certainty less noticeable than the recording on our MacBook Pro.

The X220 is the first laptop we've reviewed with Intel's new Sandy Bridge 2.5GHz Core i5-2520M processor, and like the Core i7-powered MacBook Pro, the power surge is noticeable. When it came to using the ultraportable for our everyday tasks -- writing this review in Microsoft Word, chatting in Trillian, checking our Twitter feed in TweetDeck, working with ten or so tabs open in Internet Explorer 9, and doing some light photo editing in GIMP -- the entire system was incredibly zippy. We'd even say it felt faster in everyday use than older Core i3 or i5 systems, though we could attribute some of that snappiness to the system's 320GB 7,200rpm hard drive and 4GB of DDR3 RAM. On that note, the X220 will be available with SSD options and even Lenovo's RapidDrive solution, which pairs an SSD and regular hard drive. Either way, our review unit was fast and wouldn't have you waiting around to load documents or programs.

On the graphics front, Lenovo's stuck it out with Intel's lowly integrated HD graphics, and the truth is the IGP will be perfectly fine for light video editing or HD playback. Still, the benchmarks below show that Intel's definitely been able to pack some more graphics punch into its new HD graphics options. It's no discrete card, but you weren't really planning on using this one for gaming, were you?


We should also impart that the standard voltage processor doesn't leave you with a sweaty machine. The X220 stayed relatively cool during our usage, and even when we fired up some Hulu, it didn't start to warm our laps.

Usually we lump the battery life section together with the performance and graphics, but in the case of the X220, it deserves its own section. Why? We've never seen an ultraportable -- or any laptop for that matter -- last this long on a charge. Just with the 63Wh six-cell battery, the system lasted seven hours and 19 minutes on our video rundown test, which loops the same standard definition video with brightness set at 65 percent. In typical use, we were actually able to squeeze out about eight hours of run time with that cell. Let's repeat that: eight hours.

And that's just with the standard battery. So what, you ask, about that whopping slice battery up there? What does that add? About another seven hours, if you can believe it! That's right, on our video rundown test with both batteries strapped on, the system ran that standard definition video on loop for 14 hours and 30 minutes. Technically, that means this system could last you an entire flight from New York to Taipei. Yep, it's a lot of cord-free time, but don't forget that that slice will set you back an additional $179 and add a bit of weight to your carry-on.

As per usual, Lenovo's loaded up the X220 with a plethora of its own ThinkVantage utilities, including power controls, fingerprint reader configuration, and enhanced backup and restore. Interestingly, not all of these are actually installed on the system, so if you opt to use one it will take you through a short download process. We actually appreciate that as well as the fact that the system doesn't have any other third-software programs preloaded. In fact, the system came with a pristine desktop -- rare in a world cluttered by bloated pre-fab machines.

It's true, from afar the X220 could be mistaken as a five year old laptop -- one that couldn't last longer than four hours on a charge, and would be considered sluggish by today's standards (most likely because it would have been running Vista!). But in fact, that laptop is now the longest lasting and fastest ultraportable we've ever tested. How's that for unexpected? When you consider that it packs some of the fastest speeds and one of the nicest panels we've ever used, there's no denying that the X220 is worth its $889 starting price, or the $1,299 our review unit costs. (By the way, that price doesn't include the extended battery, which pushes your total northward by $179.) Plain and simple, the four pound system requires no performance, durability, or endurance sacrifices, and that's not something we can say very often when it comes to the many ultraportables out there. Sure, there are flashier looking options out there (Apple's MacBook Air and ASUS' U36J come to mind), but hey, good luck getting those to run for 15 hours on a single charge.
In this article: battery, clickpad, Core 2011, Core i5, Core i5-2520M, Core2011, CoreI5, CoreI5-2520m, extended battery, ExtendedBattery, intel hd graphics, IntelHdGraphics, ips, IPS display, IpsDisplay, Lenovo, lenovo ThinkPad X220, LenovoThinkpadX220, review, slice battery, SliceBattery, thinkpad, x220
All products recommended by Engadget are selected by our editorial team, independent of our parent company. Some of our stories include affiliate links. If you buy something through one of these links, we may earn an affiliate commission.
Share
Tweet
Share