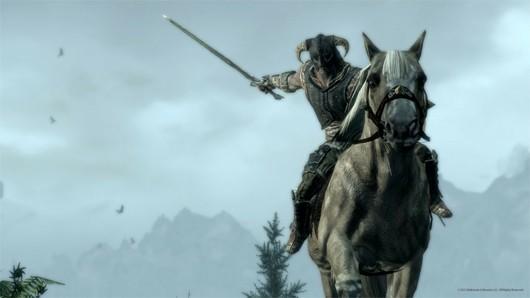 Don't fret, PlayStation 3 Skyrimmers, Bethesda says the game's 1.7 patch is heading to Sony's console "in the coming weeks." Bethesda acknowledged as much in a tweet yesterday afternoon. The game's 1.7 patch on PS3 includes the various updates from 1.6 (mounted combat, new kill cams, etc.), but it falls short of adding the Dawnguard DLC, which is still exclusive to Xbox 360.

That DLC was issued a 30-day exclusivity period earlier this year – a period which expires today, reports Kotaku – but Bethesda's VP of marketing Pete Hines stated on Twitter, "We have not announced Dawnguard for any other platform, nor given a timeline for any such news. If we have news, I promise I'd tell you." He followed that up by saying, "I was simply stating that expecting/demanding something today is unfounded. Not that news is never coming." It sounds like Dawnguard may yet head to other platforms (eventually).

We've reached out to Bethesda for further comment and will let you know if we hear back.
In this article: 1.7, bethesda, bethesda-game-studios, elder-scrolls-5, playstation, ps3, skyrim, the-elder-scrolls-v-skyrim, update, update-1.7, zenimax-media
All products recommended by Engadget are selected by our editorial team, independent of our parent company. Some of our stories include affiliate links. If you buy something through one of these links, we may earn an affiliate commission.