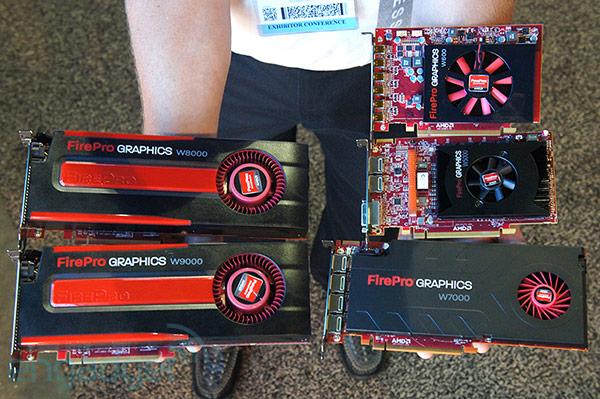 Just as you've cozied up with "Tahiti" and "Cape Verde," AMD has returned to grow its "Southern Islands" family of graphics cards with four fresh FirePros, offering up to four teraflops of graphics computing power. That spec can be found in the company's new W9000, which is capable of four TFLOPs single precision and one TFLOP double precision with a price tag just shy of $4,000. That behemoth of a card offers 6GB of GDDR5 RAM and requires 274 watts of power. More humble members of the fam include the W8000, which has the same form-factor as the higher-end W9000, but eases back on the specs, consuming 189 watts of power and carrying a $1,599 price tag.

We had a chance to take a closer look at both cards at SIGGRAPH, and while they packed a significant amount of heft, you'll likely never take a second look once they're buried away in your tower rig. Fans of smaller housings (and price tags) may take notice of the W7000 and W5000, which are both considerably more compact and require less power to boot, with pricing set at $899 and $599, respectively. Those cards were also on hand for our demo, and can be seen along with the top two configs in our gallery below. You can also sneak a closer peek in the hands-on video after the break, and glance at the full specs over at our news post from earlier today.